Ubisoft has announced a wild and wacky limited-time event for its swordfighting game For Honor.

Now until April 1 at 9 PM PT / midnight ET, players can face off against a new type of enemy: Rabbids. The cute and loveable creatures are in the game now as part of a 24-hour limited-time event. Everyone who participates gets a melee pack, on top of the reward of taking part in such a weird activity. This is no April Fool’s joke, either, as you can see plenty of people fighting against Rabbids in YouTube videos. And here is a screenshot that Ubisoft provided: 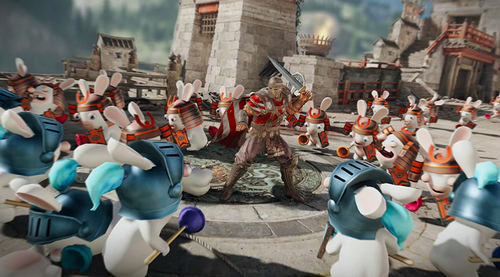 The new Rabbids-themed event is part of For Honor’s Year 3 content updates; Year 3 is known as the Year of the Harbinger. One of its most notable additions was a new fighter, The Black Prior. Looking ahead, Ubisoft said it will release even more Year 3 content, which includes seasonal events.

While this is a real thing that is happening, there are sure to be numerous fake-outs and more from the world of video games as part of April Fool’s Day, so try to be careful out there.

The Division 2 Easter Eggs Reference For Honor And Grow Home

Nintendo Switch’s Next Splatoon 2 Event Has A Neat Gimmick