Wizards of the Coast is debuting a set of new cards coming to Magic the Gathering, both in its Arena digital version and the classic tabletop game. We have the exclusive reveal of one of the upcoming cards, Finale of Promise.

Finale of Promise is a versatile red card, allowing you to cast target cards from your graveyard. The strongest effect comes if the attribute is 10 or more, which then lets you copy the spells twice with new targets. You can check the full card text, and the artwork from illustrator Jaime Jones, below. 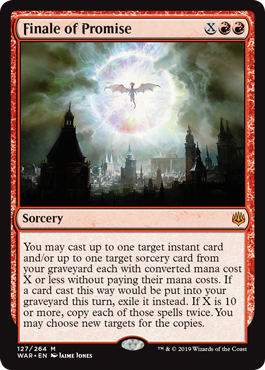 These cards are meant to signify major story moments in Magic lore. Finale of Promise shows Niv-Mizzet being reborn through the use of the Elderspell.

Magic: The Gathering Arena is the latest digital incarnation of the classic collectible card game, built to be a faster-moving version of the game than previous video game adaptations. Wizards of the Coast also made it more easily expandable to keep up with its steady stream of new card additions, so that it could receive expansions and other additions right alongside the physical game.