Fortnite is appearing to continue teasing the arrival of Season 9, with a few new world events that may be connected. First, the fourth in a series of mysterious runes has slotted into place in the vault underneath Loot Lake. Shortly after, the island’s volcano has started to emit plumes of smoke, suggesting an eruption may be imminent. 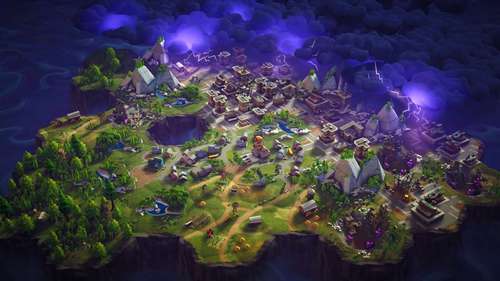 Users on the Fortnite subreddit have captured both in action. The fourth rune is the latest to slot into place as they’ve been approaching one-by-one over the last several days. The volcanic smoke was confused as a «tornado» but appears to be heralding something destructive.

All of this appears to be laying the groundwork for the next big world event, which will accompany the seasonal changeover. The next season should be coming within a few weeks, so now is the time to start teasing the event. Fortnite tends to accompany its season changes with world events that disrupt the map and add new gameplay elements. A volcanic eruption would certainly fit the bill, but the game has been known to throw a curveball and have events trigger something unexpected.

Meanwhile, a limited-time mode has been added to celebrate the release of Avengers: Endgame, the latest MCU blockbuster. You can equip the Infinity Gauntlet and several pieces of iconic Avengers gear, and complete challenges that will grant you special themed rewards. The mode won’t last forever, though, so if you want to try it out or earn some of those snazzy rewards, you should get right on it.

Fortnite has become known for offering frequent updates, both with special LTMs like the Avengers event and with large-scale seasonal changeovers. Epic Games has reportedly adopted a crunch culture to rapidly iterate on the massive game, which means that all these events comes at a cost.