The unbearable months-long wait is over as Destiny 2 finally gets a major expansion with new content in Curse Of Osiris, which means it’s time to jump back into the game!

Players can now find devastating new exotics like the Prometheus Lens tracer rifle and get an overdue bump on the character and light level caps.

Of course there’s also new side missions that result in unique Legendary gear. These new weapons are only available after you grind some specific offering components to complete a set of verses in the Lost Prophecies. 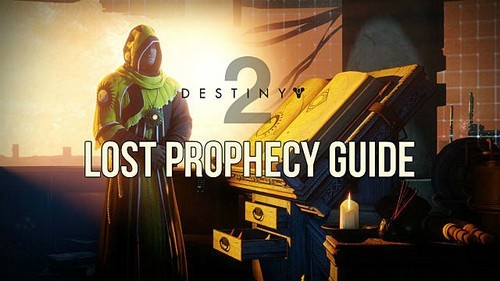 Look through his inventory of verses in the Lost Prophecies and pick one you want to finish (these don’t all have to be done in order from 1 to 11). Once the verse is in your inventory, take a look at it to see the specific requirements for the quest.

To finish off a verse and get your new Legendary weapon, you have to get specific offerings and use them in your inventory to create a Prophecy Tablet. Each offering item is usable and will be consumed when you activate it.

Once that’s done, take the Tablet back to Brother Vance and choose the option to transmute it. With that transmuted Tablet in hand, head over to the forge (the device connected to the 11 pointed star on the wall in the Lighthouse).

Interact with the forge to get your weapon reward, and then look at the star to see which verses you’ve completed and which are still incomplete.

Offerings to complete any given Lost Prophecy verse are acquired in different ways, like engaging in Strikes, Public Events, and Adventures, and most can be found on Mercury. To see the specifics for each verse, choose the Details option while hovering over the verse in your inventory.

The Details screen tells you specifics like “acquired from public event chests” or “acquired from Heroic Adventures on Mercury” and so on. Essentially, you are looking for random drops at places you’d already be going.

Below we list out every weapon and verse combo discovered so far, along with what offerings you need to use in your inventory to get the Tablet. Have you completed any of the verses we didn’t get to yet? Let us know in the comments, and we’ll get this list updated!

Good luck finding all the offerings and grabbing every weapon! Special thanks go out to YouTuber Rikudou for the Lost Prophecy screenshots.

Now that you’re on the quest to finish all the verses, you might be looking for help on the rest of the game and its expansion. From raids to exotic weapon lists and even vendor locations, our full list of Destiny 2 walkthroughs can be found right here.

Cuphead Is Coming To Tesla This Summer