When the campaign is over and the serious raiding begins, Destiny 2 is all about the quest for more powerful gear to increase your overall Light level. Forget character level, because it’s the gear that makes the Guardian.

Thankfully, the freshly released Curse Of Osiris expansion has several new additions to the growing list of exotic weapons available to those who are willing to put in the effort to get new engrams.

Besides the devastatingly powerful Prometheus Lens exotic trace rifle (which is causing more than a few problems in PvP), now you can also potentially get your hands on the triple-burst Crimson Hand Cannon exotic — if you are on a lucky streak! 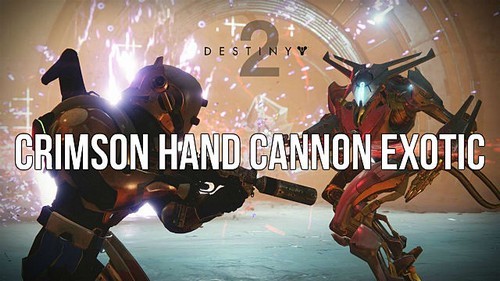 How to Get the Crimson Hand Cannon

This isn’t an answer anyone wants, but sadly it’s the truth: there’s no surefire way to get the Crimson Hand Cannon. It doesn’t drop reliably in any one location, it’s not in a locked container like the Lighthouse regional chest, and it isn’t ever a reward for a quest. I wish I could tell you to go to location X and kill Y number of Vex to grab it, but I can’t.

It’s totally up to random chance whether you get the Crimson as you grind for exotic engrams over time. At the moment, just playing more and keeping your fingers crossed is your best hope.

Don’t forget, though, that after the impending Destiny 2 December 12th patch, it will be possible to get engrams that decrypt into exotics you haven’t acquired yet through Xur. That should make for much less of a grind in the RNG hell that is Destiny 2 at the moment, and it should put more players on an even footing as exotics will be less difficult to acquire. 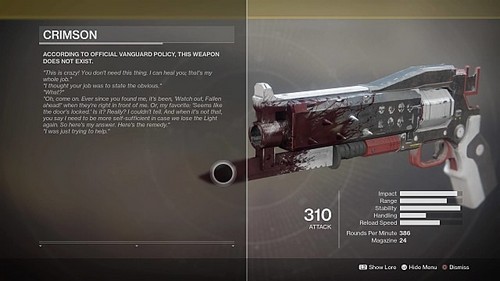 So after all that grinding for exotic engrams (or random luck and getting it immediately, you lucky son of…), what’s all the fuss about with this dinky, little pistol?

Although it doesn’t fire a continuous beam of ever more-damaging energy like the Prometheus Lens, and it certainly isn’t the biggest gun on the block, the Crimson Hand Cannon is still a beast of a weapon with the following stats and traits:

Most of the traits listed above just increase the stability, impact, and so on, but it’s those bottom two that are particularly interesting (and by interesting, I mean “devastating to anything standing in front of you”).

According to Vanguard policy, the weapon does not exist and features the “Banned” ability that lets it fire off in a three-round burst with each squeeze of the trigger for massive damage.

Each kill you rack up (and you will rack them up quickly) also heals you thanks to Cruel Remedy, which frankly will seem a little unfair to anyone on the other side of the equation. If you get precision kills, the magazine also refills for free ammo.

Have you managed to randomly get the Crimson Hand Cannon yet, or are you still grinding away and praying to the RNG gods above? Let us know when you manage to snag one because you officially have our envy!

Ready to tackle the other Curse Of Osiris challenges after nabbing the Crimson? Check out our other guides for this world-expanding DLC