That happens to be the case with Ugdall, an ancient spirit trapped beneath the Ugdenbog. Below, we cover how to find Ugdall in the twisted bog’s labyrinth, as well as your options for taking his quest or setting it aside to banish the restless spirit.

Ashes Of Malmouth offers essentially more of the same Grim Dawn experience you already know and love, but for fans of this exceedingly grim fantasy ARPG, that’s very much a good thing!

With new areas come more factions, and of course, more ultra difficult bosses and rare loot. Along the way, you can pick up some quests… or turn those quests down and annihilate the quest givers.

Looking for help with builds using the new Ashes Of Malmouth mastery classes instead? We’ve got you covered here:

Just getting to Ugdall’s tomb in Ashes of Malmouth is sort of a quest all on its own. The entrance to the tomb is found through Ugdenbog in Act V after kicking off the Ashes Of Malmouth questline by talking to Inquisitor Creed in Fort Ikon.

Use Creed’s pendant to quench the fire blocking off the north road out of the Burrwich Estates (which is best reached through the Burrwich Villiage rift, not the Warden’s Cellar, even though its closer on the map).

After you’ve reached the new Ashes Of Malmouth area, kill the giant Carraxus beast in the underground segment of Gloomwald to take his heart. Offer up the heart and Creed’s pendant to the witches at Coven’s Refuge, and then you can finally get into Ugdenbog. From there, you have an obnoxiously long walk through the gigantic swampy forest. 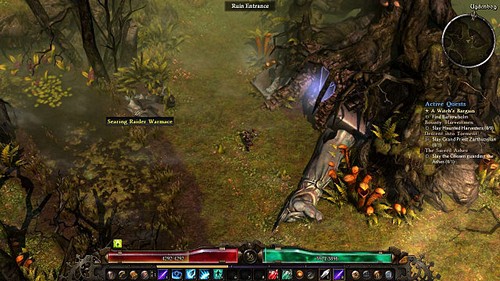 The entrance to Ugdall’s Tomb is a long trek past the Ugdenbog rift further north, beyond the section where you find the three captured Coven sisters.

Annoyingly, the entrance isn’t actually marked “Ugdall’s Tomb.” You are instead looking for an open cave entrance in the brambles marked “Ruins Entrance.” Just look for anything like a cave with some broken statues, because it may spawn at a different point than where it appeared in my playthrough.

Accepting Ugdall’s Quest or Defeating Him

For all your traveling efforts, there’s a ruined shrine to be found immediately after the entrance. You can restore the shrine and get yourself a new constellation point in the tomb there, but it requires a full 3/3 upgraded Ectoplasm and full 4/4 upgraded Chilled Steel to restore.

After the shrine, break through the crumbling walls to fully explore the tomb. There’s a bunch of skeletons and ghosts here, but they are pushovers and will barely offer any resistance. In the final room is a chest with some rare loot, and the ghost, Ugdall. 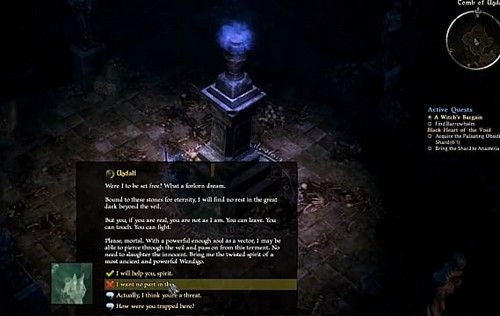 If you agree to Ugdall’s quest, you need to go back into the huge Ugdenbog and slaughter Ancient Wendigos across the area (regular Wendigos won’t cut it) until you get a Wendigo Spirit.

You are in for a long haul on that front, as Wendigo Spirit is a rare drop and there aren’t a ton of mobs around that drop it either. When you finally get the drop, bring it back to Ugdall, which you can trade for Aetherial missives.

Now you’re asking yourself… what happens if I say no to Ugdall? Don’t just pick the “I Want No Part In This” option as it ends the dialog but doesn’t do anything. Instead, say you want to attack him and get ready for a battle.

Ugdall’s base level is 55, but he’s not as tough as some of the Chthonian bosses from the base game. He throws out attacks in an outward star pattern that need to be avoided, occasionally creates a cursed blood circle around himself, and summons frost undead. You’ll want to be at least level 50 to tackle him.

If you say no to Ugdall and kill him, you are rewarded with a Wendigo Spirit (which is odd, since he wanted one but apparently already had one), which is used in another quest line later in Barrowhelm. Killing him ends the Wrath Of Ugdenbog quest early, however. 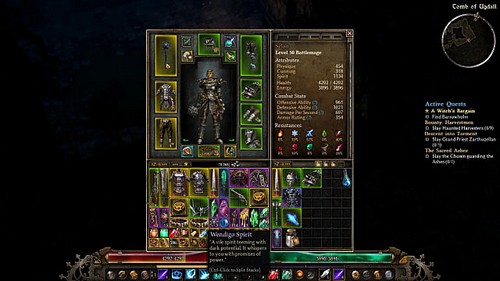 Which path did you take with Ugdall in Ashes of Malmouth, and what strategy did you employ to kill him or farm Ancient Wendigos to complete his quest? Let us know in the comments below, and be sure to check out the rest of our Grim Dawn guides here. 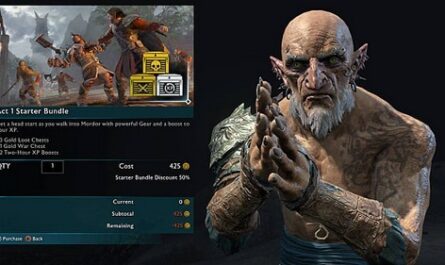 The Impact of Microtransactions in the Video Game Industry 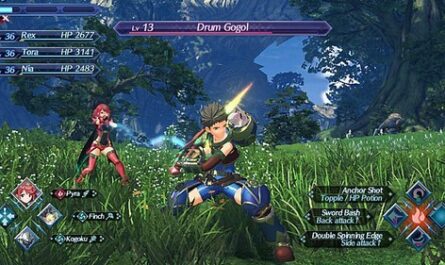 What Makes Xenoblade Chronicles 2 So Special? 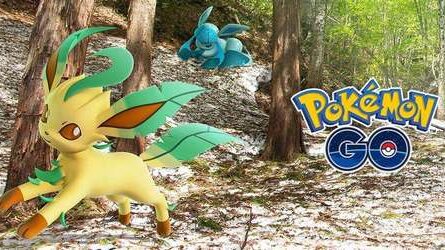 Pokemon Go: How To Get Leafeon And Glaceon