SteelSeries is one of the few peripherals companies that affords gamers a cornucopia of options for gaming mice, headsets, and keyboards. Over the past year or so, the company has worked to diversify its growing catalog to include options for almost every type of gamer — and every type of gaming scenario.

Earlier this year, SteelSeries released the M750 gaming keyboard, one that’s responsive, reliable, and suited for both competitive and casual gamers alike. Now, they’ve released the same keyboard in a tenkeyless variant. 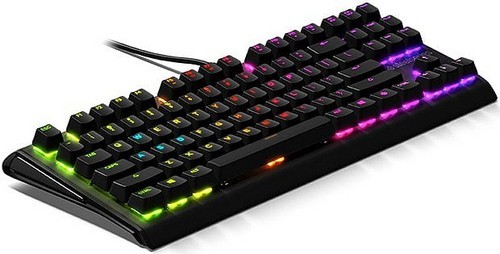 Coming in at $199.99 ($10 cheaper than the M750 tenkey), the M750 TKL is a compact option that delivers the same reliability and functionality of its predecessor. Sporting a sleek black finish, the TKL’s aircraft-grade aluminum chassis is crazy resilient, and coming in at 13.5″ x 6″ (and only weighing about two pounds), the keyboard is small enough to fit into your backpack without worry.

It still sports the odd rubber feet of its predecessor, a design choice that I found interesting yet cumbersome and ineffective. For a board geared toward eSports professionals, it’s odd that the board’s rubber feet don’t seem to stay attached when you move it around. Simply pushing the board away from me and then pulling it back toward me continually dislodged the feet, which was frustrating at best. And not amending it here seems a bit of an oversight.

However, the M750 TKL performs where it needs to. The board’s QX2 switches are responsive, swift, and comfortable. Just like the switches found in its predecessor, these switches are sensitive enough to register light keystrokes but resilient enough to not launch accidental ults in your favorite MOBA. Sure, the QX2s are bit noisier than the Cherry Reds found in most other gaming keyboards, but they get the job done and are rated for 50 million clicks — which means they’re going to last a long time.

All in all, the M750 TKL is simply a more compact, slightly cheaper version of the M750. You’ll get the same robust functionality and, for better or worse, the same design minus the ten-key numpad. Coming in $10 below the full-sized M750, the main question you have to ask yourself is: “Do I really need a ten-key numpad?” If the answer is no, the M750 TKL might just be what you’re looking for — especially if you’re a tournament player looking for something small, reliable, and built to last.

Check out our M750 review for a more in-depth look at all the features and functions the M750 TKL has to offer.

The Importance of Realism

Red Wall Is Finally Getting a Video Game, but You Probably Shouldn’t Be Happy About It