Mrs Turnbull wants to die. ‘Will you talk to her, Max?’ asks one of the medical doctors. ‘Maybe prescribe her something?’ he suggests.

I glance down at her notes. Mrs Turnbull is in her late 40s: 14 years ago she suffered horrific injuries in a crash, leaving her brain damaged, paralysed and reliant on carers for even the most basic tasks. As well as frequent seizures, she suffers difficulty swallowing and has choking fits.

Overnight she had gone from being a successful graphic designer with a busy social life – independent and free – to cocooned inside a body that refused to move or function properly.

Back in hospital after developing a chest infection, she is repeatedly expressing the wish to die, so I have been asked to see her.

Her speech is slurred, but she is eloquent. If she had been able to, she would have killed herself a long time ago because, for her, life is intolerable and has ceased to have any meaning.

Of course, there will be people who argue that she can find worth in her life; that she can still contribute to society; that life is a gift, in whatever form it takes, and she should learn to celebrate this rather than wish to obliterate it. But she doesn’t see it like that.

Over the years, I have seen many patients like Mrs Turnbull; patients whose lives have been saved or prolonged by medicine but who have been consigned in degrees to a living hell.

These are the patients who prey on your mind when you go home at night, who make you think how society would never allow an animal to suffer in this way.

This week, Noel Conway, who has motor neurone disease, lost his High Court battle to allow assisted dying. His argument was that suicide is legal but there will come a point when he is unable to do this himself and he wants doctors to be able to help him. He fears being entombed in his own body as it begins to fail.

I completely understand and in the same circumstances, I think most doctors would take the quick way out. But should there be a change to the law?

My biggest concern is that there is potential for such legislation to be abused, or for it to alter the way those with severe disabilities or terminal illnesses are perceived and treated, and this makes me wary. I also fear it could be used to ‘ease off’ the elderly or those who are severely mentally ill.

The only solution I can see is for each case to be discussed in a court of law; that this becomes a legal decision, not a medical one.

Critics of assisted dying argue that none of this is necessary, that modern medicine means people can live long, pain-free lives. But I take issue with this. While physical suffering can be alleviated in all but the rarest cases, to say that pain control is the determining factor in someone’s quality of life is wrong.

That is not the key point here. It is the emotional pain, for which no analgesia exists, that is often the deciding factor in such cases.

Antidepressants won’t make you walk again. Talking therapies can help in changing the attitudes to an illness or disability, but they can’t bring back your old life.

No analgesia can deaden the gnawing sense of powerlessness, the frustration, the indignity.

Certainly many people with debilitating and terminal conditions lead fulfilling lives, but there are also those who do not.

Who am I to say that Mrs Turnbull’s life is worth living? Or that Noel Conway should endure being ‘entombed’ in a body that no longer responds to him? That he should live a life that I wouldn’t want myself?

While I am racked with indecision about whether I want to live in a country that helps people die, I feel equally as uncomfortable that as soon as the topic of assisted suicide is raised, cohorts of people feel obliged to pass judgment on someone else’s existence.

By all means argue that assisted suicide is open to abuse, but do not propose to know what it feels like to lie in a bed staring at the ceiling day in and day out, being turned by carers as they wash you and change your sheets, longing for the life you had but which is now out of reach.

Don’t tell me that doctors can control that sort of pain.

There’s one term in medicine that really gets my goat: ‘bed blockers’. Politicians, senior NHS figures and hospital managers routinely use this phrase, as though patients are obstinately sitting in hospital beds, refusing to move out of sheer spite. It’s a subtle way of shifting the blame for the NHS’s problems on to the patients.

Yet it’s actually the patients who are blocked by failures in social service provision. The correct term is ‘delayed discharge’ and this week, research revealed it was responsible for up to 8,000 deaths a year. Please, can we stop using ‘bed blockers’ – it’s not the fault of the elderly that politicians failed to prepare for the ageing population.

Did you watch Dr Foster? Yes, yes, I know, it’s all got a bit ridiculous this series, but I’ve been hooked. And while parts of the plot have been a little far-fetched, and the acting often hammy, the issue at the centre of this series rings very true: the way warring couples drag their children into battles. 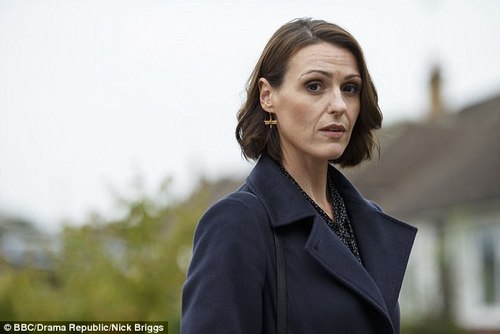 Did you watch Dr Foster? Yes, yes, I know, it’s all got a bit ridiculous this series, but I’ve been hooked

Parents always swear they would do anything for their children, but while they might be convinced they’d never hurt them, the evidence suggests otherwise. Devoted parents can lose all sense of perspective when wounded by divorce or separation
– from a psychological perspective, divorce represents the ultimate rejection, something we’re hard-wired to avoid. When it’s inevitable, people can go into ‘attack mode’, attempting to inflict maximum hurt on the other person.

The child becomes the perfect weapon because the other person holds them so dear, and losing them would mirror the rejection the other parent feels. Yet all this has a lasting effect on children. Research shows that a difficult divorce triples their risk of emotional problems – and they’re already at an increased risk of anxiety and depression as a result of having divorced parents. It makes me seethe. I used to see this all the time in A&E: children of all ages with emotional and behavioural problems, unexplained physical illnesses that are really manifestations of emotional distress, eating disorders. And these are only the very worst cases.

Any teacher will tell you of the low-level, insidious damage that never makes it to the doctor’s waiting room. Yes, divorce is tough and raw, but I’m tired of seeing parents so caught up in their own drama they fail to see the damage they’re inflicting on others.

Proof that cannabis does cause violence

For a long time, those in medicine and the law have been concerned about a link between cannabis and violence.

This has been largely dismissed by the pro-drugs lobby as an association, not proof of a cause. The difference is important to scientific enquiry, as revealed by a telling example given recently by Professor Robert Pickard, a former government advisor.

He says the rise in deaths of hedgehogs on the roads since the end of World War II mirrors the rise in television sales, but it would be daft to suggest that TVs are killing hedgehogs: it’s an association, not a cause.

The evidence linking cannabis and violent crime is compelling: regular use of the drug doubles the risk of a psychotic episode or schizophrenia.

And time and again, courts hear how people have become psychotic after smoking cannabis and, in the grips of paranoia and delusions, have murdered someone. The gallery of victims should shame those in the liberal elite who insist there’s no definitive evidence of cause and effect.

But a new study has now provided just this. Researchers followed 1,100 patients for a year after discharge from a psychiatric hospital and those who used cannabis were two-and-a-half times more likely to be violent.

So now there’s clear proof of a causative link, have we witnessed a volte-face from the pro-cannabis lobby? Of course we haven’t, because it was never really about the science.

They want to smoke cannabis, and as soon as science brings doing this into question, they simply brush it aside. Particularly frustrating are the smug, ageing hippies who claim that because they’re still here, it must be fine.

They look back on a youth spent smoking spliffs with pathetic, misplaced nostalgia, and fail to realise that, not only did plenty of people not make it through the Sixties and Seventies unscathed, but the super-strong cannabis of today is almost an entirely different product.

How many more lives must be ruined before the pro-drugs lobby admit they got it wrong?

How to survive your office Christmas party