A family is racing to find a cure for their two sons who both suffer from a rare genetic brain condition that could kill them by the age of 10.

Jennie Landsman, 33, noticed her one-year-old son Benny wasn’t reaching milestones when he was six months old. And after several doctors told her it was normal, a blood and urine test finally diagnosed him with Canavan disease.

Canavan disease is a degenerative brain disorder in infants that leaves them unable to sit, stand, or talk, eventually losing the ability to swallow, and developing seizures and blindness.

Because it is genetic, a test done on the family’s four-month-old son Josh discovered that he too has the disease, and the small signs he is showing now are due to get worse within the next few months if treatment is not found fast. 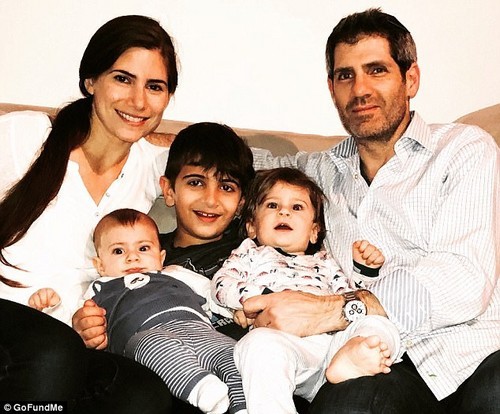 The family from Brooklyn has raised $400,000 in five days to fund a gene therapy clinical trial

While 17-month-olds are typically beginning to speak and climb, Benny cannot crawl, sit up on his own, roll over, hold his head up or talk.

Josh, who was diagnosed at one month old, is now starting to show signs of underdevelopment.

They also have another brother Michael, seven, who is not affected.

Parents Jennie, who works in the field of Pakua, a Chinese martial art, and Gary, a New York wine taster, started to get concerned when Benny wasn’t sitting up on his own at six months old.

WHAT IS CANAVAN DISEASE?

Canavan Disease is a progressive brain disorder caused by a genetic mutation and missing enzyme that affects infants.

Children with Canavan Disease are unable to sit, stand, walk or talk.

As degeneration progresses, many children will lose the ability to swallow, develop seizures, and become blind.

There is currently no cure for Canavan Disease and most afflicted children develop fatal complications by the age of 10.

Studies suggest that this disorder affects 1 in 6,400 to 13,500 people in the Ashkenazi Jewish population. The incidence in other populations is unknown.

Two doctors assured her he was a healthy infant and told the worried parents that some babies reach milestones later than others.

A few months went by and Josh was born. That’s when a third neurologist finally discovered N-acetylaspartic acid or NNA in Benny’s urine, which revealed a missing enzyme and was the key to the diagnosis.

‘I had no clue how devastating it was,’ Jennie told TODAY.

The mother-of-three said she cried for three days at the news.

After the diagnosis, doctors told Jennie and her husband Gary to go home and love the boys because there was nothing that could be done to combat the symptoms.

Canavan is due to a missing enzyme called aspartoacylase. Without enough enzyme, the NAA builds up in the brain and destroys its white matter.

The signs and symptoms of the disease usually begin in early infancy but the progression of the condition can vary.

Infants with Canavan typically appear normal for the first few months of life.

But by three to five months, they begin having problems with development, including a delay in motor skills such as turning over, controlling head movement, and sitting without support. 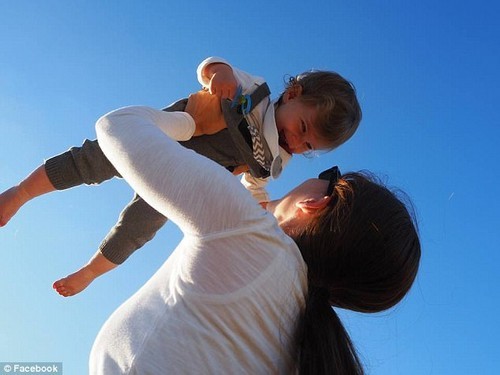 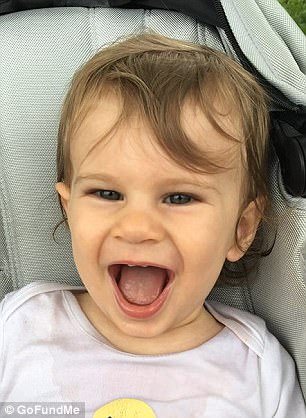 Their mother is a carrier of Canavan disease, which a urine test discovered in Benny (left). Josh (right) was diagnosed at one-month old

The boys have another brother Michael, seven, (left) who has not been affected by this disease

It was discovered the disease was passed down through their mother, who unknowingly is a carrier for Canavan even though a genetic test 10 years ago said she wasn’t.

Jennie received genetic testing 10 years ago that determined she wasn’t a carrier of any diseases common among the Ashkenazi Jewish population.

But it is possible the the test produced a false negative.

The Canavan carrier rate for the general population is 1/300. But Ashkenazi Jewish people are at high risk with a carrier rate of 1/55.

And if both parents are carriers, children have a 25 percent chance of having the disease.

The parents began researching treatments and found a gene therapy that could treat Canavan, but due to funding cuts the research has been halted.

The lab in Chicago told the Landmans that $1.2milion is needed to start developing the therapy.

So last week the family from Brooklyn started a GoFundMe with the goal to raise enough to kick-start the treatment.

The money will fund a clinical trial run by Dr Christopher Janson, a neurologist at the University of Illinois in Chicago. The trial will test a gene therapy on a small group of patients with Canavan.

This therapy will allow the brain to strengthen myelin production, which is disrupted in Canavan sufferers and leads to the brain’s deterioration.

And this treatment could also be a break though in research of other conditions.

‘Some of the same approaches we are taking with Canavan can potentially be applied for Alzheimer’s,’ Dr Janson said.

Right now this is the family’s only hope at stopping the deterioration of the boys’ brains.

But even with their disease, Jennie described her boys as ‘happy little dudes.’

If no treatment or cure is found, Benny and Josh are expected to develop fatal complications by the age of 10

GP missed woman’s bowel cancer as she was ‘too young’