Mother-of-three and former drug addict Tracey Helton is illegally mailing naloxone, which reverses the symptoms of an opioid overdose, to drug addicts in a desperate attempt to save lives.

Helton, 47, sends the medication to about 10 people a week who reach out to her and tell her they have a drug problem.

The addicts admit to her that they are hooked on potentially-fatal drugs and that they could benefit from the lifesaving medication – which is hard to come by in rural parts of the US.

Helton does not disclose the specifics of her job, saying only that she works in substance abuse prevention, nor how she obtains the naloxone.

But countless ‘clients’ have credited her with saving their lives, claiming that without the naloxone she gave them they would have died from an overdose. 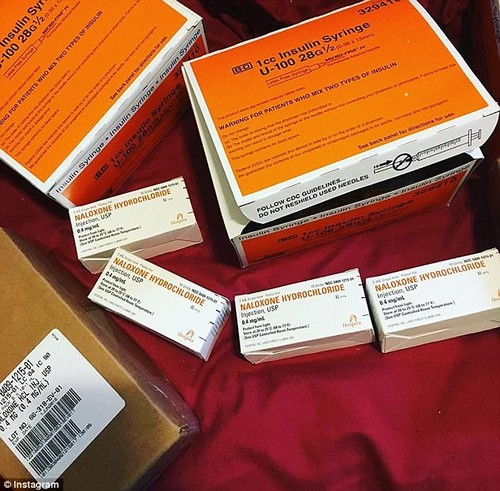 Pictured is one of Helton’s ‘care packages’, which she sends to individuals hooked on opioids

Helton, who lives in the San Francisco area, got the idea for her small operation four years ago when she heard a story about someone who overdosed and had to wait 45 minutes for paramedics to reach them.

The anecdote led to her realization that many people addicted to opioids do not have access or money for naloxone.

Not all law enforcement officials who respond to 911 calls are equipped with, or know how to administer, naloxone, a popular brand name of which is Narcan.

In addition to this, in some states, opioid addicts have to receive a prescription for the drug, which lessens their chances of receiving it. 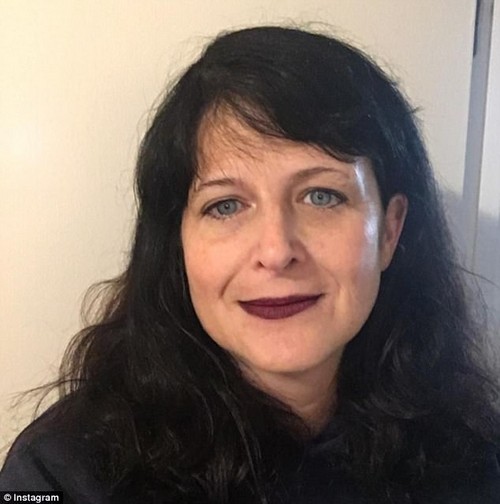 Helton, 47, became clean in 1998. She says that the reason she mails naloxone to addicts is because people showed her kindness when she was a struggling addict

THE SEVERITY OF AMERICA’S OPIOID CRISIS

President Trump has said the opioid crisis is now a ‘national emergency’.

About half a million Americans died of drug overdoses between 2000 to 2014, according to the CDC.

The opioid overdose death rate for people of all ages hit an all time high in 2014.

The increases in deaths related to prescription opioid pain relievers and heroin are the ‘biggest driver of the drug overdose epidemic,’ according to the CDC.

These are the center’s tips for stopping the epidemic:

Lastly, the drug is expensive, costing some people hundreds of dollars for a few doses, which could prove crucial in the aftermath of an overdose of heroin.

Experts are warning that the availability of naloxone will be a key factor in the deescalation of the opioid epidemic.

The drug is crucial at a time when synthetic opioid fentanyl is slipping more and more into illicit heroin sales.

Fentanyl, which can be ordered from China or purchased from Mexico, can be up to 50 times stronger than heroin.

Often times people who purchase heroin off the streets do not realize that fentanyl, which is profitable for drug dealers, has been mixed in with it.

The rate of deaths related to fentanyl in US cities has skyrocketed in recent years, shooting up 600 percent from 2014 to 2016.

From the beginning, Helton, who has experience training people to prevent an overdose, knew that mailing the drug would be illegal. ‘I was hesitant at first because of legal implications,’ she admitted.

But ‘I have the potential to save lives.  I decided to do it anyway.’ Helton explained that the risks were higher when she started the operation, saying: ‘The law is returned to my side.’

‘They’ll say: “I use heroin.” I’ll ask from what city,’ Helton said, explaining that mailing naloxone is not a first resort.  She will first do research about where the person lives and find out if they can get affordable Narcan at any local establishments. 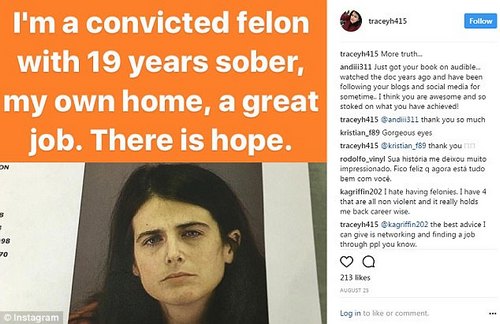 Pictured is a post from Helton’s Instagram account featuring a mug shot from her days as a drug addict during which she prostituted herself to make money. Helton was convicted for possession and sale of a controlled substance 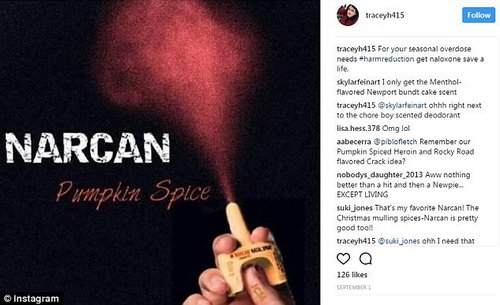 Helton estimated that she gets about ten requests a week, and she said that most of her ‘care packages’ are sent to rural places where people do not have access to the drug, including Texas.

But her clients might have to be patient, as her one-man operation becomes busy at times. ‘I don’t turn people away, but there’s a waiting list,’ she said. Helton purchases the naloxone she ships via donations she receives from others.

She explained that the waiting list can be days or even weeks long, depending on the volume of requests she is getting at the time.

And countless people have expressed gratitude, claiming that the naloxone she provided saved their lives after they did too much of an opioid.

She used to keep track of all the people who got back to her with this good news, but has stopped as the number of people she has saved has grown over the years.

Helton, who overdosed twice but has been clean for almost 20 years, says that the people who helped her get and stay clean are the reason she does what she does.

When she was addicted, contracting HIV was a pervasive threat that came with doing drugs.

‘Many of my friends died of HIV,’ she explained, adding that the kindness of strangers who provided clean needles for her helped her escape it. ‘I am a person who used to do drugs. That really encouraged me,’ she said.

Helton said she is hoping to turn her operation, which takes up much of her time while she balances a full-time job and being a mother, over to an organization within one year.

‘There’s kind of only so much I can do,’ she said.

Newcastle mother-of-three was nearly killed by her SPOT