A Canary Islands hotspot popular with holidaymakers may face a deadly outbreak of dengue and yellow fever in the coming days.

Concerned health officials in Fuerteventura, off the coast of Africa, have discovered the mosquito responsible for the two killer infections.

Scores of homes on the island, some owned by expats, are now being fumigated in a desperate attempt to contain any potential outbreaks.

The mosquitos were discovered on a residential estate, prompting widespread fears the insects could be living in the homes of unaware locals.

And locals have also been asked to send in ‘suspicious’ pictures of any mosquitos so the spread of the lethal insects can be managed.

It comes as sun-seeking holidaymakers are getting ready to pack their bags to head to the island, which averages 20°C in December.

Thousands are expected to embark on the four-long plane journey to escape the gloomy weather and soak up the winter sun.

Concerned health officials in Fuerteventura, off the coast of Africa, have discovered the mosquito responsible for the two killer infections

Regional health officials revealed last week the Aedes type mosquitos behind the spread of the painful diseases had been discovered on the island.

The insect – the Aedes aegypti – can also spread other viruses common in tropical and sub-tropical areas including Zika fever, Mayaro and Chikungunya.

The latter has no cure and, like the other viruses associated with the mosquito, can cause fever and severe joint pain before leading to death.

A small pocket of the mosquitoes were detected on a residential estate called Las Granadas near to Fuenteventura Hospital in the island capital Puerto del Rosario.

Residents there, who are thought to include some expats, were told to leave their homes today for at least 12 hours so they could be fumigated.

Regional health officials, who told homeowners of their decision at a meeting, have hired a private firm to do the work.

The fumigation of more than 30 houses in the Las Granadas area, due to take place in stages, is expected to last two days. 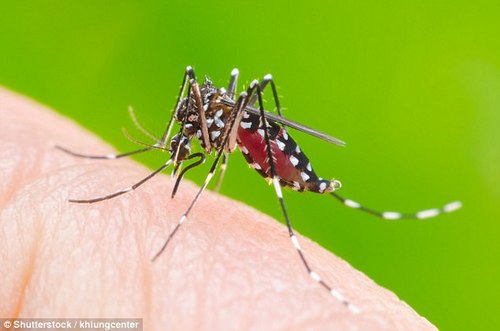 Scores of homes on the island, some owned by expats, are now being fumigated in a desperate attempt to contain any potential outbreaks

The Aedes aegypti has white markings on its legs and a marking in the form of a lyre on the upper surface of its thorax.

The mosquito originated in Africa but is now found in tropical and subtropical regions throughout the world.

Only the female bites for blood which she needs to mature her eggs.

The illness can progress to a hemorrhagic fever during which patients experience more bleeding and persistent vomiting. If not treated it can progress to shock and death.

Some babies with Microcephaly, a condition where a baby’s head is much smaller than expected, have been reported among mothers infected with Zika virus while pregnant.

Basilio Valladares, director of the Canary Islands’ Institute of Tropical Diseases and Public Health, revealed no-one has fallen victim as of yet.

He told Spanish daily El Pais the possibility of virus transmission was non-existent at the moment because no cases have been recorded so far.

But he added: ‘If they settle the moment might arrive when they could transmit viruses like dengue fever as happened in Cape Verde and Madeira.’

The mosquitoes are thought to have reached Fuerteventura on freight ships when they were still eggs, although tests are ongoing to confirm how they arrived.

The Canary Islands regional health authority have sought to play down the fears of locals and holidaymakers.

They insist the presence of the insects does not mean visitors will go down with any of the viruses linked to them.

Officials claim that apart from sporadic imported cases, yellow and dengue fever are not present in the Canary Islands.

The Canary Islands regional health authority confirmed the discovery of the Aedes aegypti mosquito in a statement.

It announced traps have been set and surveys taken place to determine how far they have spread. Searches for their breeding grounds are also underway.

A spokesman revealed the public have been asked to notify them of any ‘suspicious’ mosquitos by telling them the exact location or if they have any bites.

The Aedes aegypti mosquitos were blamed for the 30 cases of dengue fever on Cristiano Ronaldo’s native island of Madeira in 2015.

They were also linked to a 2010 outbreak of dengue in Cape Verde. The destination which has become increasingly popular with British tourists in recent years.

The dangers of epilepsy drugs for pregnant women