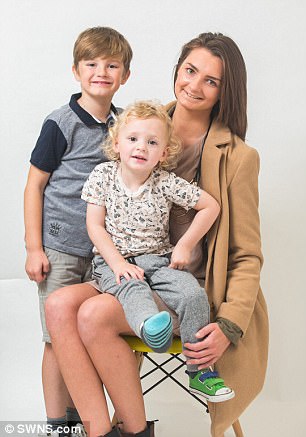 Sometimes referred to as the silent killer, as you cannot smell it, see it or feel it, official figures suggest that 50 people die from carbon monoxide poisoning each year in Britain. Mother-of-two Jade Ullrich (pictured) shares her story

Having just moved house, with an energetic five-year-old and three months into her second pregnancy, it was perhaps not surprising that Jade Ullrich, 26, felt tired all the time. She put it down to morning sickness.

In fact, feeling exhausted was the first sign Jade, her son Dillan and her unborn child were being poisoned – by carbon monoxide gas leaking from their boiler.

Sometimes referred to as the silent killer, as you cannot smell it, see it or feel it, official figures suggest that 50 people die from carbon monoxide poisoning each year in Britain, and 200 are hospitalised.

However, experts believe these numbers could be a gross underestimate, as symptoms of carbon monoxide poisoning, such as tiredness, headaches, confusion and nausea, can be easily misdiagnosed.

A report to be published tomorrow by the All-Party Parliamentary Carbon Monoxide Group will call for a greater effort to increase awareness of carbon monoxide poisoning – including among doctors – with a focus on people at risk of a misdiagnosis, such as elderly patients with dementia, or expectant mothers with ‘pregnancy’ symptoms.

Jade shudders to think what might have happened in 2014 had the carbon monoxide poisoning not been spotted. She and Dillan had recently moved into their rented home in Newquay, Cornwall, when fatigue set in.

‘Pregnancy is tiring anyway, let alone also running around after a five-year-old,’ she recalls. ‘I just put it down to my hormones.’ But Jade’s lethargy grew worse. ‘I’d get up, wash my face, feel shaky and stumble back to bed,’ she says. ‘Some mornings I was too exhausted to get out of bed at all.’

As the weeks passed and Jade’s head became ‘foggy’ – she was forgetful and felt as if she couldn’t think straight – she became more concerned. Then she started vomiting several times a day.

‘I thought it was morning sickness. When I was 14 weeks pregnant I told my midwife. A doctor then diagnosed hyperemesis gravidarum – extreme vomiting in pregnancy.’ The GP told her not to worry and prescribed anti-sickness medication.

But nothing changed. ‘I could barely find the energy to take Dillan to school,’ she recalls. ‘I was constantly being sick. I felt achy and absolutely exhausted.’

A few months later Dillan began acting strangely. ‘Dillan was a bouncy, energetic boy who always bounded from bed. But now he was sluggish and refusing to get up. It was not like him at all.’ Jade wondered if he was acting up out of jealousy at the impending arrival of a new baby.

C – Do any of your Companions or cohabitees suffer from similar symptoms?

O – Do you feel better when you are Outside?

M – Do you get your boiler system Maintained regularly?

A – Buy yourself a carbon monoxide Alarm.

It was only when her mother Johanne came to the house that the cause was spotted. ‘The first thing she did when she walked in was wrinkle her nose up,’ says Jade, who was then seven months pregnant. ‘It was as if she could smell something I couldn’t.’

Jade’s mother said she smelled what seemed like a ‘burnt plug’ and urged her to call the gas man. An engineer came round that day to run tests on the boiler. When he was done, he looked concerned.

‘He told us to open all the windows immediately, then he turned the gas off and put stickers across the boiler and the gas hobs saying they were unsafe and we were not to use them,’ Jade says.

They all had to stand in the garden while the engineer ensured the house was fully aired. The boiler was leaking dangerously high levels of carbon monoxide – though it was another fault with the boiler causing the smell Jade’s mum had picked up on. ‘If it hadn’t been for her, I dread to think what would have happened,’ says Jade.

Carbon monoxide is produced when fuels including gas, coal or wood do not burn fully, such as in faulty boilers and gas fires. It builds up and then leaks into the air.

Blocked flues and chimneys can also stop carbon monoxide from escaping, allowing it to reach dangerous levels in the home. Burning charcoal in an enclosed area – such as a barbecue in a tent or covered area – can cause coal to burn inefficiently and carbon monoxide can build up quickly.

‘It is by far the most common cause of fatality by poisoning,’ he says. It occurs as the gas attaches to haemoglobin, a molecule in the red blood cells that transports oxygen. Carbon monoxide displaces the oxygen, preventing it travelling around the body efficiently. 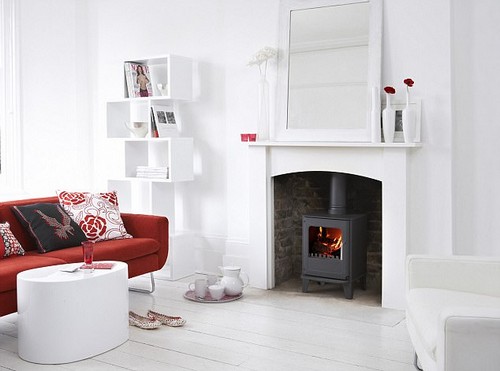 Experts believe these numbers could be a gross underestimate, as symptoms of carbon monoxide poisoning, such as tiredness, headaches, confusion and nausea, can be easily misdiagnosed

This means someone exposed t
o high enough levels can fall unconscious and, if exposure continues, the heart will stop pumping blood to the brain, which can be fatal.

Dr Walker believes the official number of carbon monoxide poisoning diagnoses each year according to the NHS is probably a ‘gross underestimate’. ‘We believe a lot of cases are undiagnosed. We see elderly people found dead in their homes who have gas fires.

‘Often their deaths are put down to natural causes and no post-mortem is done, when it could have been that their gas fire was leaking carbon monoxide.’

He wants more GPs to think about carbon monoxide as a possible cause when patients complain of headaches. ‘Not enough GPs ask whether the patient feels better when they leave the house, or if others in their home suffer the same symptoms.’

A complicating factor is that symptoms will vary depending on where a person is in the house and how much time they spend near the source of the leak.

‘I’ve come across cases of carbon monoxide poisoning with two people dead in one room and one person alive in another room in the same house,’ adds Dr Walker. 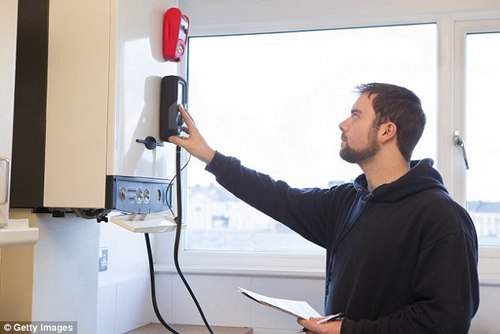 If someone is exposed to high enough levels can fall unconscious and, if exposure continues, the heart will stop pumping blood to the brain, which can be fatal

Jade was exposed to more of the gas than Dillan – who had been at school most of the day. She saw her doctor two days after the gas man had visited. ‘He apologised, saying he had no idea it could have been carbon monoxide poisoning.’

The GP had to tell Jade exposure can cause stillbirth, miscarriage and birth defects including brain damage, as the gas can cross the placenta from the mother’s bloodstream. ‘I felt terrified,’ Jade says. ‘It was unthinkable.’

Jade had routine check-ups and the baby seemed healthy. ‘The midwife told me it was a case of waiting until he was born to see how he was. I felt anxious for the rest of the pregnancy,’ she says.

Harley was born two months after the boiler fault was spotted. Thankfully, he was healthy.

In 2015, the landlords of Jade’s property were prosecuted by the Health and Safety Executive. The boiler was more than 11 years old and had not been serviced for 18 months. Andrew and Deborah Hopkinson pleaded guilty and were fined £14,000. They were also ordered to pay £209 costs each. 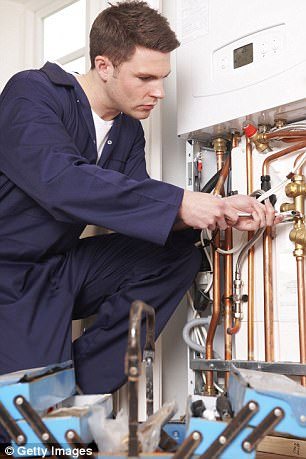 Scott Darroch of the Gas Safe Register says that a quarter of homeowners and renters don’t get their gas appliances checked regularly. ‘We recommend that all homes have their gas appliances tested annually by a Gas Safe registered engineer to ensure they are working safely and efficiently.’

He adds: ‘Landlords should know they have a legal duty to get the gas appliances they provide in their property safety-checked.’

There are also signs that can indicate gas appliances are not working safely. ‘Look out for a lazy, yellow flame instead of a crisp, blue one on your hob, sooting or staining around appliances and excessive amounts of condensation in the room,’ says Mr Darroch.

Jade is now an ambassador for the Gas Safe Register, raising awareness of the importance of regular boiler checks and getting a carbon monoxide detector. These sound an alarm when carbon monoxide is detected and can be bought at most hardware stores.

‘I want to warn people – especially as the weather gets colder, when we close our windows and use the heating more,’ says Jade. ‘I could have lost my baby, or we could all have lost our lives because of carbon monoxide.

‘We’re now living in a different rented property. The first thing I did was ensure the boiler had an up-to-date safety certificate. I shudder thinking about it.’

Why Frankie Muniz can’t remember Malcolm in the Middle

Sarah Hyland opens up real about transplant side effects