Cigna, one of the nation’s largest health insurers, will no longer be covering the cost of addictive painkiller OxyContin.

As of January 2018, the firm will instead be covering Xtampza ER, an opioid designed to be difficult to abuse.

It is the most drastic move by any insurer to curb America’s addiction epidemic, which has led to tens of thousands of overdose deaths.

However, experts warn that even harder-to-abuse alternatives are highly-addictive – and the tests to analyze Xtampza’s deterrence was carried out by the manufacturer, Collegium. 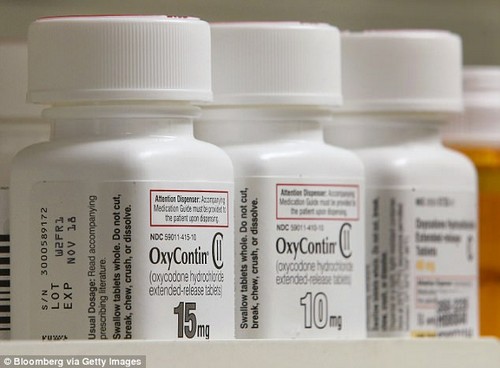 As of January 1, 2018, Cigna, one of the nation’s largest health insurers, will not cover Oxycontin, and instead will cover Xtampza ER, an opioid designed to be difficult to abuse

Oxycontin manufacturer Purdue Pharma hit back at the announcement last week, claiming the move is primarily driven by cost-saving efforts, and the addiction-prevention is an added spin.

Cigna insisted in a statement that the primary motive is lowering levels of abuse.

‘Our focus is on helping customers get the most value from their medications – this means obtaining effective pain relief while also guarding against opioid misuse,’ said Jon Maesner, Cigna’s chief pharmacy officer.

‘We continually evaluate the clinical effectiveness, affordability, and safety of all our covered medications as these characteristics can change over time, and we make adjustments that we believe will provide better overall value for those we serve.’

WHAT IS CIGNA’S NEW OPIOID OF CHOICE?

Xtampza ER, Collegium’s lead drug, is a long-acting oral opioid painkiller meant to be taken after a meal for maximum effect.

It is designed to help the estimated 10-30 percent of chronic pain patients with swallowing difficulties.

The contents of Xtampza can be removed and sprinkled on food or into a cup, without compromising their safety or abuse-deterrent characteristics.

It is not the first time Cigna has signaled intent to target opioid addiction directly.

In May last year, the firm announced plans to cut the use of addictive opioids among customers by 25 percent by 2019.

Purdue is the perfect target.

The firm has been the poster child for the abuse epidemic since it started to take hold 10 years ago.

While it does have abuse-deterring properties, which make it harder to crush and snort, studies have found these were barely effective, and OxyContin – a brand version of oxycodone – is still a drug of choice among addicts.

The choice to flip from Purdue to Collegium also re-opens the sour relationship between the two companies, which warred over the approval of Xtampza ER in 2016.

When the drug was approved in April last year, Purdue Pharma claimed that Xtampza ER infringed some of its patents. However, the District Court of Massachusetts in February ruled in favor of Collegium.

And there are financial motives, as Purdue said. Experts point to a section in Cigna’s statement regarding the cost of the drugs, giving an insight into the firm’s delicate balancing act between politics and business.

‘Collegium is financially accountable if the average daily dosage strengths of Xtampza ER prescribed for Cigna customers exceed a specific threshold. If the threshold is exceeded, Collegium will reduce the cost of the medication for many of Cigna’s benefit plans.’

Women more unhappy than men for almost their entire lives

This everyday habit could reduce your risk of cancer