A grandmother-of-seven who struggles with vascular dementia has ‘got her spark back’ by volunteering once a week at a nursery school.

Joyce Stackhouse has problems remembering what she has done or people she sees on a day-to-day basis, and can easily become confused or anxious.

But now the 85-year-old lights up during her weekly two-hour visits to Highdale Day Nursery in Clevedon, Somerset, where the children fondly know her as ‘Nanny Joyce’.

Her granddaughter Claire Stackhouse, who works at the nursery, come up with the idea after watching the Channel 4 show Old People’s Home For Four-Year-Olds in August.

The programme saw pre-schoolers share their classroom with pensioners for six weeks and to look at the impact this would have on the health and happiness of the older group.

Clare said her experiment appears to be working as not only does Joyce love playing with the children, but it has lead to great improvements with her mobility and her mental capacity as well as having reduced her anxieties.

Medical studies have shown that keeping elderly sociable by encouraging them to take part in community based group activity can keep prevent cognitive decline. 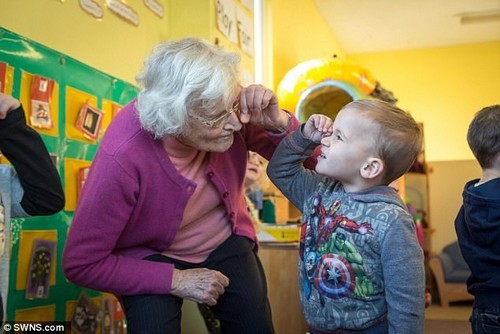 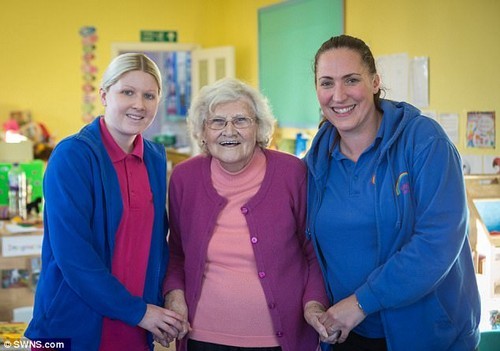 Someone in the world develops dementia every three seconds.

An estimated 50million people worldwide living with the disease, which is set to double every 20 years, reaching 75million in 2030 and 131.5million in 2050.

There are currently 850,000 the UK and 5.4 million in US – and the escalating crisis will place huge pressures on health and care services.

Alzheimer’s disease is the most common cause of dementia – accounting for 60 to 80 per cent of cases.

But there are as many as 50 other causes of dementia.

Vascular dementia is a common type of dementia caused by reduced blood flow to the brain. It’s estimated to affect around 150,000 people in the UK.

Currently there is no cure for dementia but new drugs can slow down its progression.

Joyce, from Backwell, Somerset, joins in with drawing, singing and even dancing with the class of two- to four-year-olds, even getting down on all fours to crawl inside the nursery’s ‘dark den’ tunnel.

The pensioner says she thinks of the youngsters as her own children – and that her visits to the nursery are much more fun than being at home.

Claire said: ‘She’s like a totally different person when she’s here – I feel like she’s got her spark back since she started coming,’ said Claire, 24, who works at the nursery.

Claire explains that before Joyce started coming to the nursery, she needed help getting up from sitting on a chair – but now she’s more energised.

‘She’s been down on all fours crawling into the dark den – although she needed a bit of help getting back up,’ she said.

‘Most of the time she can’t even remember the name of her friend down the street who she sees almost every day.

‘But we had a new child start recently and she said, “That’s a new one” and recognised she hadn’t met them before. 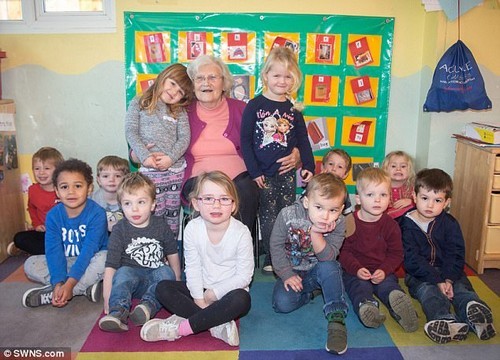 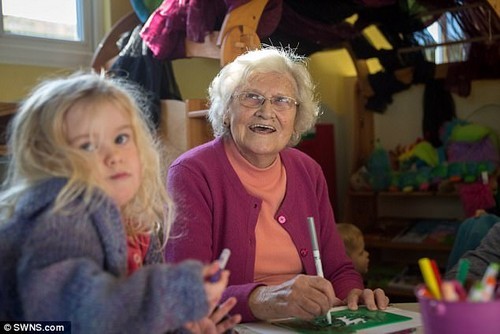 The grandmother joins in with drawing, singing and dancing with the class of 2-4 year olds

‘And she remembers the songs we sing with the children, she knows the words and she has her favourite songs.

‘So we’ve been able to see that progression, and the positive impact it’s had on her.’

Claire was inspired to invite ‘Nanny Joyce’ to Highdale after watching Channel 4 documentary ‘Old People’s Home For Four-Year-Olds’ in August.

The programme, filmed in a care home in nearby Bristol, introduced a group of four-year-olds to the residents of the home – with ‘amazing’ improvements to the mental and physical health of the latter.

Highdale Nursery manager Sarah Millard, 39, said that Nanny Joyce’s visits since September have had a ‘really, really positive impact’ so far – on both Joyce and the children. 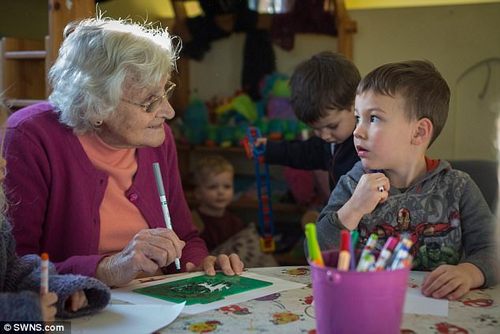 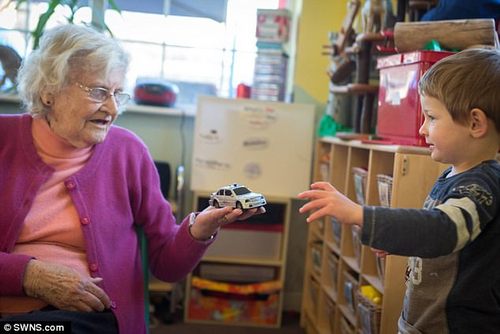 ‘They get really excited to see her,’ said nursery manager Sarah about the children

‘They get really excited to see her,’ said Sarah.

‘On Monday I said to them, “Does anyone know what day it is tomorrow? We’ve got a special guest coming”, and one of them shouted out, “Nanny Joyce!”.

‘They look after her as well – it’s like they know she’s elderly and needs a bit of looking out for.

‘Last week she was sat in a chair and one of the children went off and got her a cushion to sit on – without even being asked to do so.’

Claire added that Joyce is far more relaxed during her visits to the nursery.

She said: ‘It’s really nice for me to see her in this environment.

‘When I see her outside of the nursery, at my dad’s house or something, she’s always worrying about something, like getting home before it gets dark. 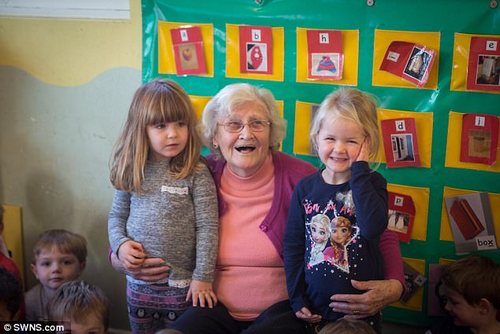 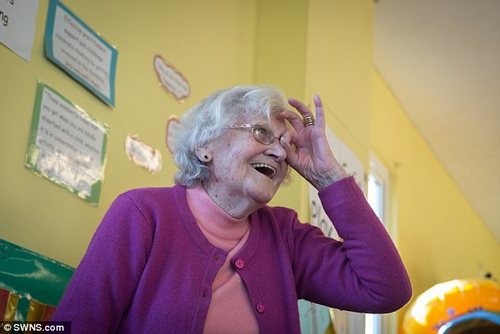 ‘But when she comes here, she says all her worries disappear.’

And even though Joyce said she was ‘a little overwhelmed’ when she first started coming, she seems to have settled in well now.

‘When I first came here I honestly didn’t know what I was letting myself in for – it was a bit overwhelming,’ she said.

‘But I wouldn’t have this kind of fun just sitting at home on my own. They’re all as good as gold,’ Joyce added.

Claire, Sarah, and fellow manager Lindsay Hall now hope that they can lead by example, and inspire other nurseries to invite elderly people into their classrooms to continue the positive impact.

FRIENDSHIPS ARE THE KEY TO GOOD BRAIN HEALTH

It’s well known that good friends are key to happiness, but research suggests they can help stave off cognitive decline.

Indeed, a recent study shows that maintaining relationships with friends as we age could even go so far as to ward off neurodegenerative diseases, such as dementia, by keeping the brain young.

Researchers analysed the social habits of ‘SuperAgers’ – those aged 80 and above – against a group of people in their 50s and 60s.

It was found that individuals in the older age group who reported having maintained ‘positive, warm and trusting’ friendships were more likely to have brains that worked as well as those of people 30 years younger

Researcher Emily Rogalski said: ‘You don’t have the be the life of the party, but this study supports the theory that maintaining strong social networks seems to be linked to slower cognitive decline.’

Lab slices up brains to find a cure for Parkinson’s