Doctors have removed 148 gallstones the size of sweetcorn from inside a woman.

Huma Bai, who is thought to be between 40 and 50 years old, suffered crippling abdominal pain for more than a year.

Last week Ms Bai was admitted to Jeevan Jyoti Hospital in Madhya Pradesh, India, where doctors found the cluster of stones in her gallbladder.

In surgery lasting one-and-a-half hours, a team of doctors individually removed each stone.

Ms Bai is thought to have developed the gallstones as the result of a greasy diet.

It is unclear how serious her condition was, however, gallstones can cause severe discomfort if they block one of the bile ducts. 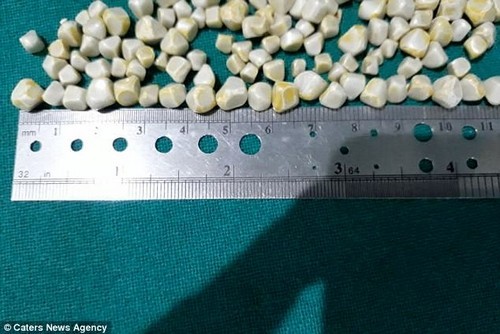 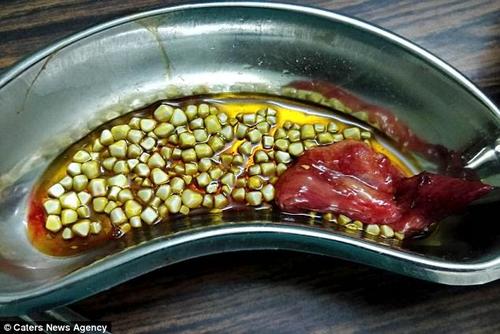 In surgery lasting one-and-a-half hours, a team of doctors individually removed each stone

Gallstones are usually made of cholesterol and form in the gallbladder.

They typically do not cause symptoms but can lead to intense abdominal pain if they block a bile duct.

Around one in 10 adults in the UK have gallstones but may not be aware of it.

If people suffer inflammation of the gallbladder as a complication, they may experience pain, fever or jaundice.

Gallstones are caused by an imbalance of bile in the gallbladder.

Risk is higher if you are female, overweight and older than 40.

Dr Markus Damor, who led the surgery said: ‘She had been suffering from abdominal pain on and off for over a year.

‘She said she had seen several doctors in the past but no one conducted a sonography.

‘She had come to us on December 8. We first performed several tests including blood test but everything was normal. Then we performed a sonography where we found stones in her gallbladder but we did not know it would be a cluster.

‘We performed the surgery and removed the stones one by one.

‘The stones are 4-6mm big. We are planning to send them for further analysis.’

It is unclear how Ms Bai is recovering or if she is at home.

Katie Lolas reveals why you should never weigh yourself