It can be hard to resist those puppy eyes when you want to treat your dog.

But dog owners are being reminded to keep festive chocolate away from their pets, as vets prepare for a spike in cases of poisoning over the holiday season.

While it is a well-known fact that chocolate should not be fed to dogs, more than 350 dogs have suffered the symptoms of chocolate exposure in the last five years.

New research published in the journal Veterinary Record suggests animals are four times more likely to get ill in the run-up to Christmas due to greater accessibility to chocolate.

Chocolate contains theobromine, a stimulant similar to caffeine, which can cause vomiting, increased heart rate, agitation and seizures in dogs.

Chocolate contains theobromine, a stimulant similar to caffeine, which can cause vomiting, increased heart rate, agitation and seizures in dogs (stock)

WHAT OTHER FOODS ARE BAD FOR YOUR DOG

Alcohol – Alcohol has the same effect on a dog’s liver and brain that it has on humans. But it takes far less to do its damage so they could end up in a coma or even die after consuming a little amount.

Grapes and raisins – These can cause kidney failure in dogs. Nuts should also be avoided.

Sweets – Candy, gum, toothpaste, baked goods, and some diet foods are sweetened with xylitol which causes more insulin to circulate through a dog’s body. That can cause blood sugar to drop and result in liver failure.

Fat trimmings – Fat trimmed from meat, both cooked and uncooked, can cause pancreatitis.

Peaches, and Plums – The problem is the seeds or pits which can cause inflammation of the small intestine in dogs.

Between 2012 and 2017, 386 cases of chocolate poisoning involving 375 animals were reported at almost 230 veterinary practices in the UK.

One particularly greedy canine got through six Chocolate Oranges and six Toblerones before being sent to the vet. Another was treated for poisoning after gulping down a hot chocolate drink, the study found.

None of the cases seen by vets were considered to be life-threatening, researchers at the University of Liverpool said.

Dogs can suffer digestive issues, tremors and seizures if they consume chocolate as it contains theobromine, which they are allergic to.

Most will experience vomiting and diarrhoea but consumption of chocolate can result in death for dogs.

Dogs received a number of treatments for the chocolate poisoning including an activated charcoal to mop up the theobromine. 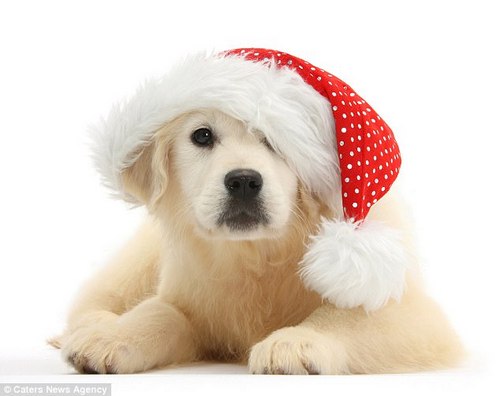 Despite chocolate poisoning rarely resulting in death in canines, the team warned of ‘significant peaks’ in chocolate intoxication and called for dog owners to be vigilant over Christmas.

They wrote: ‘Chocolate ingestion has a unique seasonal pattern which merits highlighting this risk to clients, particularly in the run-up to Christmas and Easter as chocolate becomes more accessible within the household.’

The condition was more common in dogs under four years old, but no particular breeds were associated with increased risk.

Pet owners are told to call the vet immediately if their dog ingests chocolate – some affects won’t appear until a few hours after consumption and catching it early helps the dog recover faster.

Vets will need to know what kind and how much chocolate the dog ate – wrappers are a good way to find this out – and how much the dog weighs in order to apply the right treatment.

The one treatment the vet will need to administer is getting the dog to throw up – if this happens away from the vet, it is recommended that the dog not receive any food or water immediately after.

How Men Can Help Women in STEM: Shut Up, Sit Back, and Listen

Jane Goodall, Still Traveling the World and Speaking Up for Animals at 83

Rare condition forces woman to end 4 pregnancies in a row