A GP who specialises in sexual health has warned about a rise in patients coming to see him because work has left them too tired and stressed to have sex.

It comes as a new survey has revealed six out of ten people are too exhausted to perform when we get home from a day at the office.

It’s prompted Dr David Edwards, who runs a practice in Chipping Norton in Oxfordshire, to reveal the key causes of a low libido and his top tips to spice up your love life.

He says the key reason is the modern stress epidemic – caused by our so-called ‘always on’ culture.

‘As we strive to impress our bosses by working late into the evening, and checking emails even when on holiday or at weekends, a nine-to-five job has become a thing of the past,’ he said.

‘And it appears this could be having a detrimental effect to our sex life as new research finds we’re too tired and stressed by work to find time for sex. I’ve seen hundreds of patients suffering with this problem over the years – and it’s getting worse.’

Britons are so stressed by the demands of daily life that their sex lives are becoming non-existent, new research has revealed.

While many people say they think about sex several times a day, 61 per cent are too exhausted to perform when we get home from work.

A key problem is not being in the mood in the first place, with 57 per cent of people surveyed saying they were ‘too stressed’ to have sex on a regular basis.

This is despite more than 20 per cent of those polled saying they thought about sex more than 10 times a day.

Indeed, the survey of 2,000 UK adults, commissioned by the manufacturer of natural libido-booster Vitano Rhodiola, also found that two-thirds of people have suffered from stress or anxiety as a result of work – with men more at risk than women.

And one in five people surveyed revealed that financial worries had a direct impact on the amount of sex they were having.

It’s a problem that can impact our relationships and overall happiness, he said.

‘If a man fails to perform because of erectile dysfunction or premature ejaculation, stress and anxiety are not always identified as the cause,’ he explained.

‘Stress can also contribute to female sexual dysfunction, especially low sex drive. What’s more, if either partner is just too exhausted to have sex it can invariably lead to a relationship breakdown.

‘It’s a problem I would encourage couples to address sooner rather than later.’

Your body’s natural hormonal response to stress is to produce cortisol, known as ‘the stress hormone’. This prepares it for a ‘fight-or-flight’ response by supplying an immediate energy source to large muscle groups.

But this can be a turn-off as far as sex is concerned. And a high-pressured job can expose us to stress on a daily basis, which can mean elevated levels of cortisol are produced for a long period of time.

Sometimes this leads to a reduction in our sex hormones, which in turn can reduce libido.

Some 61 per cent of people surveyed stated exhaustion was the most common reason for skipping sex. Indeed, a common symptom of long-term stress is fatigue and/or exhaustion.

Those suffering burnout syndrome – which can affect even the most hard-working and competent of people – can struggle to get up in the morning, eat and sleep properly and the last thing on their mind will be love-making.

You’re out of sync sexually with your partner

If you work different hours to your partner you may find that you are out of sync when it comes to sex – more than half of those surveyed said they were not in the mood at the same time as their partner.

This can then have a knock-on impact on other parts of a relationship, causing even more stress. Indeed, 47 per cent of people surveyed admitted that a poor sex life resulted in increased stress and anxiety.

Job stress and self-esteem are also linked to a loss of libido, particularly in men.

If a man’s performance at work is challenged, he may feel as if he is under achieving and loses a sense of self-worth.

And it can become a vicious cycle – 17 per cent people polled admitting they had lost body confidence as a result of their partner not being interested in sex.

Stress-related sexual dysfunction is often greater in people at the age in which their careers may be most demanding. In the survey, 70 per cent of 25 to 34-year-olds said that stress has impacted on their sex life.

7 WAYS YOU CAN SPICE UP YOUR LOVE LIFE

The good news is there are plenty of small but significant changes you can make to help redress the balance in your lifestyle, helping to improve your love life and overall health.

Get away from the factors causing stress – even if it’s just for an evening and within the UK. Indeed, travelling far from home could add to your stress if you’re already suffering.

Taking a bath or shower together then massage and sex, then a home prepared candle-lit dinner can really make a difference. 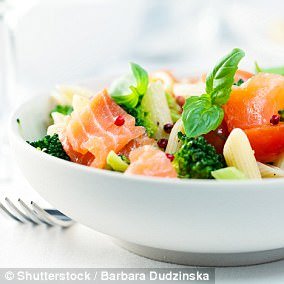 ‘Breakfast on oats with some berries and cinnamon, have some salmon with your salad for lunch and a stir-fry with turkey strips for dinner.

‘These foods help to increase the amino acid tryptophan which boosts serotonin in the body.’

3. Make time for a lunchtime stroll

Even taking a 30-minute walk around the block at lunchtime increases your daily activity levels, which in turn can boost mood and self-esteem.

4. Talk to each other

If a deadline is looming, working late might be a must, but it’s important to prevent resentment creeping in from your partner.

Sending the occasional cheeky text message from work can often be all it takes to help maintain the sense of emotional closeness that is so important to sustaining a healthy sex life.

Alcohol is what’s known as an ‘anti-nutrient’ as it can deplete the body of essential nutrients, especially those needed for energy production and stress reduction. 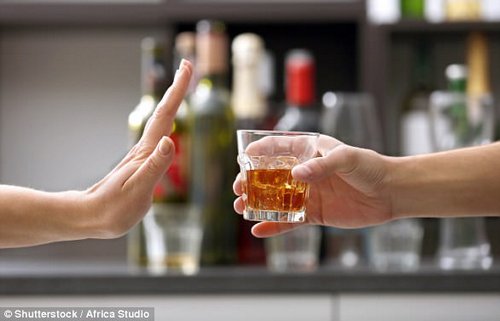 Drinking too much alcohol can have on your sex-life, say experts (stock image)

So over time, drinking can become a vicious cycle which will inevitably impact your sex drive. Frequent alcohol consumption can also lead to lowered testosterone levels in men, and in turn lower libido.

Scientific research led by Dr Edwards, published in the Journal of Sexual Medicine and also the journal Phytotherapy Research, has shown that rhodiola rosea, a herb used for centuries to relieve stress and boost energy, can also help boost low sex drive in both men and women caused predominantly by stress. The supplement is available on the high street from £6.99.

If your sleep is poor quality, there’s lots of truth in the old wives’ tale of having a milky bedtime drink before you hit the pillow to encourage the release of melatonin, our sleep hormone.

Combining that with half a banana, and you should find your sleep really improves. Also, rather than asking your GP to prescribe sleeping tablets which can make you feel groggy in the morning, try a natural herbal alternative ideally containing valerian and/or passionflower.

Hospitals have been told to free up beds for winter surge