Furious campaigners have blasted the Government’s ‘weak’ decision to recommend a ban on scandal-hit vaginal mesh implants for one procedure.

Health officials announced the controversial surgery should only be banned for prolapse – when organs fall out of place, and not incontinence.

Outraged victims warn this leaves the door open for thousands of other women to suffer life-changing complications from the ‘barbaric’ devices.

Nice, which advises the NHS, announced this morning that mesh, made of brittle plastic, should ‘only be used in the context of research’ for prolapse.

But Sling The Mesh, backed by nearly 5,000 women, claim they have ignored the repeated calls to ban the surgery for incontinence.

Both are common problems for women after childbirth.

Kath Sansom, founder of Sling The Mesh, told MailOnline: ‘The guidance does not go far enough. It’s ludicrous that patients haven’t been listened to on this.

The move comes amid mounting pressure for the complete ban of vaginal mesh implants, which have left thousands of women on the brink of suicide.

It also comes after the death of a prominent vaginal mesh campaigner who died from sepsis, reportedly triggered by her controversial implant.

Christina Brajcic, 42, from Ontario, Canada, passed away in November following a four-year battle with persistent infections – as a result of her mesh.

The move comes after the death of a prominent vaginal mesh campaigner, Christina Brjacic, who died from sepsis, reportedly triggered by her controversial implant

WHAT ARE VAGINAL MESH IMPLANTS?

Usually made from synthetic polypropylene, a type of plastic, the implants are intended to repair damaged or weakened tissue in the vagina wall.

Other fabrics include polyester, human tissue and absorbable synthetic materials.

Some women report severe and constant abdominal and vaginal pain after the surgery.

In some, the pain is so severe they are unable to have sex.

Infections, bleeding and even organ erosion has also been reported.

Ms Sansom added: ‘Our Government ministers are not listening. It’s time for them to stop burying their heads in the sand and suspend its use.’

She wants a retrospective audit to determine ‘the true scale of the disaster’ and work out how many women have been fitted with the ‘barbaric’ implants.

Sling The Mesh has almost quadrupled in members in recent months. Nearly 5,000 people, mostly sufferers, now support the cause to ban vaginal mesh.

It is believed that of the women in the group who have been given vaginal mesh, three quarters were fitted with the device to treat their incontinence.

Vaginal mesh has been subject of various legal proceedings across the world, with figures suggesting more than 100,000 are suing manufacturers of the devices.

Tiresome fights by campaigners, backed by MailOnline, has since led to Australian health officials making a similar move for prolapse operations.

Watchdogs in the country banned the use of vaginal mesh implants for prolapse earlier this month after a review found ‘the benefits do not outweigh the risks’.

The Nice verdict comes after the Government released its three-year investigation into the mesh scandal last September. It rejected calls for a ban at the time. 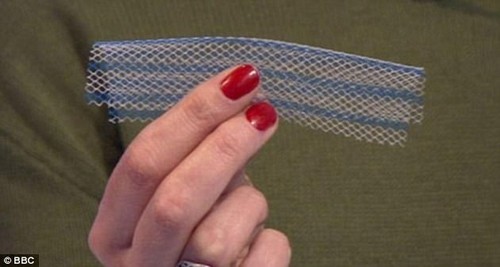 The drugs rationing body issued draft guidance in November that recommended the ‘gold standard’ implants should not be routinely offered for treating organ prolapse.

THE DIFFERENT TYPES OF MESH

Different types of mesh implants include:

It also follows the landmark news from New Zealand that all forms of pelvic mesh would be banned – becoming the first major country to do so.

Officials in the country announced earlier this week that they would remove the controversial implants from supply and limit the use of surgical mesh products.

The scandal came to light in April, when the NHS tried to dodge media attention over the implants that left hundreds of women in agony.

Senior doctors immediately called for a public inquiry into the controversial mesh, with some saying the scandal could be akin to thalidomide.

At the time, 800 women were suing the NHS and device manufacturers. However, it is unsure how many women are now looking to take action in Britain.

Mesh, introduced 20 years ago and dubbed ‘gold-standard’, was promoted as a quick, cheap alternative to complex surgery for incontinence and prolapse.

Because it did not require specialist training to implant, victims of the procedure have since begged for tougher regulations to conduct such surgery.

Vaginal mesh has been considered a high-risk device for nearly a decade in the US, with bodies accepting up to 40 per cent of women may experience injury.

Some studies, published in an array of scientific journals, have shown that pain, erosion and perforation from the surgery can strike up to 75 per cent of women.

‘I’VE BEEN ON THE BRINK OF SUICIDE. MY KIDS KEPT ME GOING’ 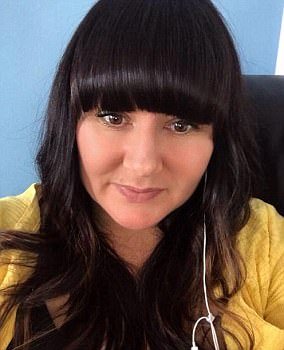 Janette Nelson, 43, was on the brink of suicide after suffering agonising pain from a vaginal mesh implant she had fitted

A mother-of-three has revealed she was on the brink of suicide after suffering agonising pain from a vaginal mesh implant she had fitted.

Janette Nelson, 43, from Newtownards, Northern Ireland, said the only think that kept her going was her children, but she still battles guilt every day as she depends on them to help her wash, dress and even catheterise after the procedure left her unable to control her bladder.

The former hairdresser also blames her implant for the breakdown of her relationship as her boyfriend left her when the pain was too severe for her to have sex.

Unable to work, her career has also been destroyed.

‘My children lost their mummy’

Ms Nelson had the most common type of mesh, known as TVT, fitted in March 2012 in an attempt to cure her urinary stress incontinence.

She said: ‘Immediately once my tape was fitted I woke up with excruciating pain in my groin; its indescribable.’

Just one week later, Ms Nelson wet herself while out with her children and now relies on her eldest daughter to help her catheterise every day.

Due to the excruciating pain of the mesh, Ms Nelson has been forced to rely on her mother and sister to help her raise her children.

She said: ‘My children lost their mummy. I’ve been on the brink of suicide.

‘My kids kept me going. I was useless as a mum but I’m still their mum. It’s all been about me for the past few years.’ 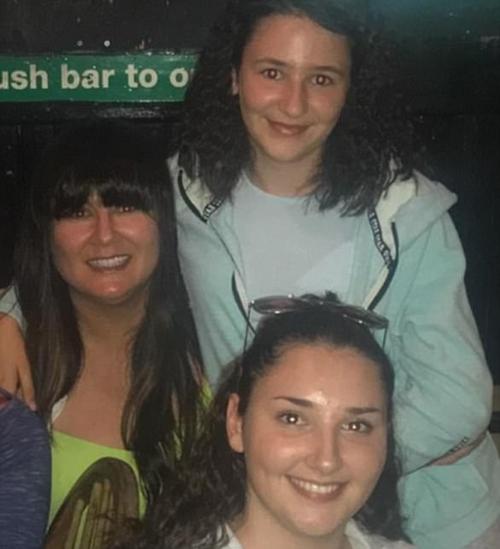 ‘My boyfriend left me because of it’

As well as affecting her as a parent, Ms Nelson also blames the implant for the loss of her love life and career.

She said: ‘I had a boyfriend when this started but the sex was excruciating, neither of us could cope with it. My boyfriend left me because of it.

‘I used to work as a hairdresser; always on my feet, always very confident, but now I can hardly walk and I can’t control my bladder so I can’t work. It’s really knocked my confidence.’

The alarming evidence prompted officials in three US states to suspend the practice and saw them call for an urgent review into its safety.

Scottish officials asked for it to be suspended in Scotland in 2014 pending a similar review, but hundreds of women are still believed to be having the surgery.

More than 10,000 women a year are fitted with mesh. But only 4,800 have suffered lacerations and nerve damage from the mesh breaking into tiny fragments.

However, campaigners stress these are just the tip of the iceberg and that actually there are thousands more – but they have been kept silent.

Leading mesh manufacturer Johnson & Johnson was forced to pay out $57 million in September to a woman fitted with the implant.

Ella Ebaugh, 51, from Philadelphia, was awarded the eight-figure sum after a jury found the company to be negligent and its product defective.

HOW MANY WOMEN SUFFER?

According to the NHS and MHRA, the risk of vaginal mesh pain after an implant is between one and three per cent.

Yet, a study by Case Western Reserve University found that up to 42 per cent of patients experience complications.

Of which, 77 per cent report severe pain and 30 per cent claim to have a lost or reduced sex life.

Urinary infections have been reported in around 22 per cent of cases, while bladder perforation occurs in up to 31 per cent of incidences.

Critics of the implants say trials confirming their supposed safety have been small or conducted in animals, who are unable to describe pain or a loss of sex life.

According to Kath Samson, head of the Sling The Mesh campaign, surgeons often refuse to accept vaginal mesh implants are causing recipient’s pain, and are not obligated to report such complications anyway.

She said: ‘Less than 40 per cent of surgeons report vaginal mesh implant side effects.

‘In that period around 4,800 women have gone into hospital with a mesh complication, but the number reported to the MHRA is just over 1,000.

‘Many more women would have experienced pain but never gone to hospital.’

How to survive your office Christmas party