Researchers revealed that a chemical found in the poisonous horse chestnut called esculin can be used to create a bright and florescent molecule gel to find tumors during MRIs, CT scans and ultrasounds.

The gel improves visibility during these tests, fixing the current problem that makes it difficult to detect a mass due to low light.

These findings offer better chances of detecting cancerous tumors at the earliest stage, which can lead to a faster diagnosis and save lives. 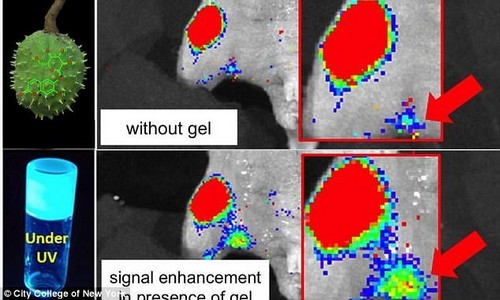 An image shows how a tumor lesion, barely visible without the gel (top) lights up when the horse chestnut extract gel is applied

Researchers from The City College of New York have developed an esculin-derived molecular gel that is radiation responsive.

Esculin is a chemical that naturally occurs in the horse chestnut and is beneficial to circulatory health.

Researcher Dr Jan Grimm said: ‘The possibility of developing a topical application from the gel makes this innovation an attractive potential improvement to current techniques of cancer imaging.’

Grimm added that using a plant-based gel is not only functional but also potentially economical, safe and environmentally friendly.

The light used in cancer imaging is a blue glow that illuminates biological molecules.

However, it is not as optimal as it is low intensity and the blue light is scattered and absorbed in tissues, according to researchers. 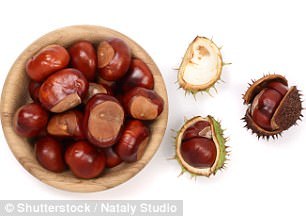 Horse chestnut, also known as conkers, are mildly poisonous but have been found to have medicinal properties

The esculin gel has both scintillating and fluorescent properties, meaning the gel alters the way light is reflected in tumors.

This extract reacts much better to the light used during cancer imaging, making masses appear bright on the screen.

The findings published in the journal ACS Appl Mater Interfaces show an image of a tumor lesion that is barely visible without the gel, yet glows blue and once the gel is applied.

The chemicals in them, called glycosides and saponins, are toxic to many animals and humans.

However its leaves have been used for medicinal purposes to treat inflammation caused by ezcema, soft tissue swelling from bone fracture and sprains, arthritis and joint pain.

Now they can be used to detect cancer at its earliest stages before it has spread.

How long can you keep Thanksgiving leftovers for?