Indian doctors have removed a 3kg (6.6lbs) tumour that had been ‘slowly growing’ inside an unaware 65-year-old man for his entire existence.

Hemendra Gupta Arya, from Aligarh district, in Uttar Pradesh, found it difficult to breathe and suffered from chest pains throughout his life.

But over the years he was repeatedly told that his symptoms were being triggered by a heart condition and he was given tablets.

It was only when his respiratory problems worsened that stunned doctors found his tumour, which was growing between his heart and left lung.

The mass, reported to be a hamartoma, was removed in a three-hour long surgery at the Jawaharlal Nehru Medical College of the Aligarh Muslim University.

Hemendra Gupta Arya, 65, from Aligarh district, in Uttar Pradesh, had a 3kg (6.6lbs) tumour removed that had been growing since he was born 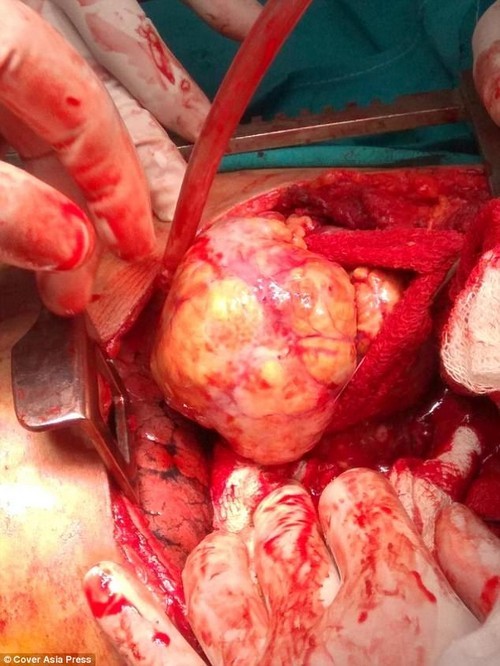 The mass, reported to be a hamartoma, was removed in a three-hour long surgery at the Jawaharlal Nehru Medical College of the Aligarh Muslim University

Hamartoma tumours grow when tissue is missing as babies form in the womb, a tumour is then created and grows until it is spotted.

Dr Mohammad Haneef Beg, head of the university’s cardiovascular and thoracic surgery department, led the procedure to remove the mass.

He said: ‘It was an extremely rare tumour and it had settled deep into his chest. He had been living with it all his life, slowly growing at a very gentle pace.

Hamartomas, which are present from birth, are a benign growths of an abnormal mixture of cells and tissues.

The most common is a hypothalamic hamartoma (HH) -which causes seizures, behavioural problems, blackouts and memory loss.

The condition is thought to affect only one in a million people.

Some individuals can go years with very few symptoms, or ones that are so mild, they are often missed by both parents and medical professionals.

‘These hamartoma tumors grow when tissue is missing as babies form, a tumour is created and then grows. It had been present in his body since birth.

‘By the time we located it between the heart and chest it was even covering the whole of the left chest and weighed 3kg (6.6lbs).

‘He came to us when he’d had enough, he was experiencing severe pain and difficulty in walking.’

Dr Beg revealed that Mr Arya had visited several doctors but ‘none were able to diagnose the real problem’.

He added: ‘Everybody thought he might be having heart related issues. He was given medicines for temporary relief.

‘He came to us and told us about the problems so we did some tests. We immediately decided to operate and remove the tumour.’

Dr Beg warned that his age made the surgery ‘challenging’.

He said: ‘He could have suffered thoracic hemorrhage at any time but we are glad that the surgery went successful and the man is doing absolutely fine now.

‘If only it had been picked up much sooner, he would have lived a much calmer life.’ 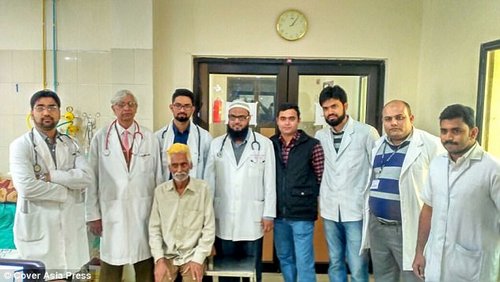 The sisters with childhood Alzheimer’s