People who sleep poorly are more likely to develop Alzheimer’s disease because the proteins that, in part, cause it build up in the brain after just one sleepless night, a new study revealed.

Many studies have linked insufficient sleep with an increased risk for Alzheimer’s – as well as at least 10 chronic diseases – but a new study from Washington University captured what happens to the brain on insomnia.

Sleep acts as a sort of sewage system for the brain, and without it, the mind gets clogged with all sorts of waste, including amyloid beta proteins.

People genetically predisposed to get Alzheimer’s have abnormally high levels of these proteins, and, after a single night of sleep deprivation, so did the otherwise healthy study participants.

A night without sleep deprives the brain of the sewage system that washes out harmful beta amyloid proteins, which build up to clog neurons and lead to Alzheimer’s disease

Alzheimer’s is a neurodegenerative disease, meaning it comes on as brain cells die.

Scientists believe that its causes are multi-fold: genetics, environment and lifestyle factors all likely combine to determine the odds of developing Alzheimer’s disease.

The disease, which begins with memory loss but can lead to debilitating cognitive declines and, evenutally, death, affects about 5.5 million people in the US.

The number of Americans suffering and dying from the disease is only expected to climb as the population – particularly the baby boomer generation – ages.

Beta amyloid proteins like to bond to each other making them ‘chemically sticky,’ according to the Alzheimer’s association. These clumps drift around the membranes enclosing nerve cells, or form plaques on them.

Both forms, but especially the floating clumps, may interfere with or block signals being sent across synapses, leading to the break down in memory and cognitive abilities in people with Alzheimer’s disease.

Those with a genetic predisposition for Alzheimer’s disease have higher levels of these proteins than other people, even before they develop the cognitive symptoms.

Previous research has shown that disruptive sleep disorders, such as sleep apnea, can raise risks for Alzheimer’s and poor sleep has been linked to as much as a 1.5 fold increase in the odds of developing the disease.

The small new study, published in the Annals of Neurology, randomly assigned a group of eight participants with no previous sleep or memory problems, to either get a good night’s rest, stay up all night, or sleep after taking the sleep disorder drug sodium oxybate.

The sleep aid is designed to improve the period of deep, dreamless sleep when much of the brain’s sewage system is thought to operate.

The researchers took samples of the cerebrospinal fluid the surrounds the brain before the assigned sleep – or sleepless – nights and every two hours the following day, in order to measure the accumulation of the proteins in each person’s brain.

After just one night, the participants assigned to sleeplessness had a dramatic increase in the beta-amyloid proteins in their cerebrospinal fluid. 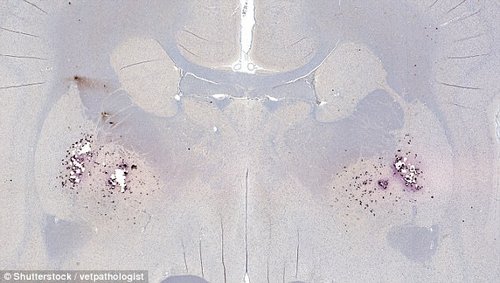 The dark spots in this image of a brain are beta amyloid plaques, which build up in the brain to contribute to the development of Alzheimer’s disease (file image)

In fact, the 25 to 30 percent increase in their protein levels was on par with what the researchers would have expected to see in people genetically predisposed to Alzheimer’s – even though the participants had all previously had normal levels.

This is not to say that those participants are now at an elevated risk for memory degeneration – that is highly unlikely, according to the study results.

Normal sleep should restore the brain’s disposal system, so that the proteins do not build up over time to clog neurons.

It does, however, show the direct effect of sleeplessness on one of the causes of Alzheimer’s.

If one sleepless night can lead to these significant increases, a lifetime of insufficient rest could well overcome the ability of the brain to catch up to beta-amyloid production, allowing the protein to build up and break down communication between parts of the brain.

Unfortunately, the pills meant to induce the deep sleep during which the brain goes to work on those proteins appeared to have no effect on the build-up of protein, so it is unlikely to boost the brains ability to catch up with the breakdown process after a sleepless night.

Going to Mars could cause astronauts to lose bone

Is it adultery if my spouse has dementia?’