Children who eat fish at least once a week get better sleep and have a higher IQ, according to a new study.

Researchers revealed that omega-3s, the fatty acids in fish, improve kid’s intelligence and found that those who ate more scored 4.8 points higher on an IQ test than children who said they rarely ate the seafood.

Those same children also reported getting a better night’s sleep, which previous studies have linked to higher intelligence.

The findings are the first of its kind that show sleep as the link between fish and heightened intelligence, leading researchers to suggest introducing kids to fish as young as 10 months old to improve overall cognition throughout their lives. 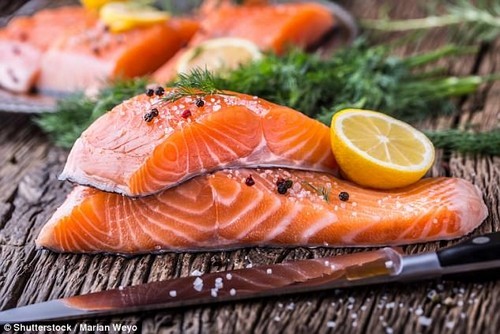 Kids who eat more fish get better sleep and scored 4.8 points higher on an IQ test than those who rarely consumed fish, according to a study from the University of Pennsylvania

Researchers from the University of Pennsylvania conducted a study on more than 500 children in China aged nine to 11 to learn more about the effects of fish on intelligence and sleep.

The participants filled out a questionnaire regarding eating habits and how often they consumed fish ranging from never, seldom to always.

They took an IQ test where researchers then matched those results to the questionnaire.

The results published in the journal Nature showed a distinct association between fish and intelligence as those who reported eating fish more often scored 4.8 points higher than those who rarely at the seafood.

Children who said they sometimes eat fish scored 3.31 points higher than those who ‘seldom’ or ‘never’ consumed it.

The parents of the children in the study were also asked to submit a questionnaire regarding their child’s sleep quality.

The length of sleep, frequency of napping and tiredness were included in the survery.

Previous research has shown that the omega-3s found in fish have health benefits that can lower blood pressure, slow the development of plaque in arteries reducing the risk of heart attack and can improve sleep.

Omega-3 fatty acids are often touted as being incredibly beneficial to a person’s health, with findings show that omega-3 may help to:

Other studies have also associated fish to improved cognitive function.

However, this is the first study that has linked the fatty acids to better quality that can lead to higher intelligence.

Researchers are encouraging parents to expose their children, as young as 10 months old, to fish as long as it doesn’t have bones in order for them to grow a liking to the flavor and texture.

‘Doing that could be a lot easier than nudging children about going to bed,’ Raine added. ‘If the fish improves sleep, great. If it also improves cognitive performance – like we’ve seen here – even better. It’s a double hit.’

Eating fish just once a week is considered high fish intake as defined in this study.

The researchers plan to study different types of fish consumption to determine which has the best health benefits to boost cognition and sleep quality.

What came first, the chicken or the cure for cancer?