A mother-of-two whose ovarian cancer made her stomach so bloated she looked eight-and-a-half months pregnant said she felt ‘like Mary expecting a surprise Christmas baby’.

Andrea Oliver, 54, from Teddington, south west London, would often wear baggy clothes to disguise her ‘bump’, as the bloating eventually became so severe, she could barely eat or breathe.

She initially thought her symptoms were panic or anxiety related, but a string of tests revealed she had stage three ovarian cancer.

Recalling her shock diagnosis last December for the first time, Mrs Oliver, who is speaking to raise awareness about the disease, said: ‘Everything I was going through weirdly reminded me of the nativity story.

‘Mary learnt very quickly that she was having a baby and I felt the same.

‘I’d gone from feeling relatively okay to looking eight-and-a-half months pregnant, like I was expecting a Christmas miracle of my own.

‘After my diagnosis on December 7, that’s when the bloating really got so bad that I looked like I was with child.’

And on December 22, she had 5.5 litres of fluid drained from her abdomen, which medics then sent away for testing.

She continued: ‘Before my diagnosis, I’d made Christmas puddings for the big day.

‘I do it every year, it’s a tradition, and all I could think about, because of my bloating, was not being able to eat them.

‘After the fluid was drained, I felt such relief at being able to sit around and eat my Christmas dinner with my family as planned.

‘My daughters call it “the weirdest Christmas ever”, but, despite everything, we had a fantastic day.

‘I laughed so much I ended up with a hematoma – swelling caused by a break in the wall of a blood vessel – at my drain site.

‘My doctors told me that, if it was caused by Christmas cheer, it was fine.’ 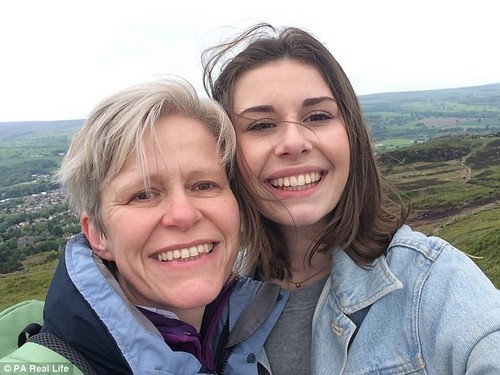 She initially thought her symptoms were panic or anxiety related, but a string of tests revealed she had stage three ovarian cancer (pictured with Katie in May 2016) 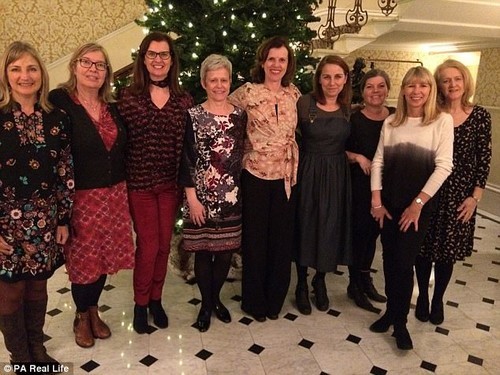 Recalling her shock diagnosis for the first time, she said: ‘Everything I was going through weirdly reminded me of the nativity story’ (pictured with some friends last month)

When did her ordeal begin?

Mrs Oliver’s brush with cancer began back in October 2016, when she started going to the toilet more often than usual.

Assuming she had a simple urinary tract infection, such as cystitis, she tried to combat her symptoms by drinking lots of water.

Then, weeks later, she and husband Martin, 53 – who have two daughters, Isabelle, 19, and Katie, 22 – visited their eldest girl in Malaga, Spain where she was studying.

But Mrs Oliver, who started experiencing stomach cramps and loss of appetite, recalled: ‘I wondered if it may be to do with all the rich food we were eating.

‘Then, back home, things got even worse – especially my bladder symptoms.

‘I’d been asked to cover a big meeting for my boss at work, but just remember thinking, ‘There’s no way my bladder will cope with sitting in that room all day.’

Deciding to see the doctor, thinking her symptoms indicated panic or anxiety, Mrs Oliver had a harsh wake-up call.

She said: ‘As I sat in my GP’s office, as she reeled off symptoms for ovarian cancer, I wasn’t overly worried.

‘I’d had a couple of scares before, so thought this would be another storm in a teacup.’ 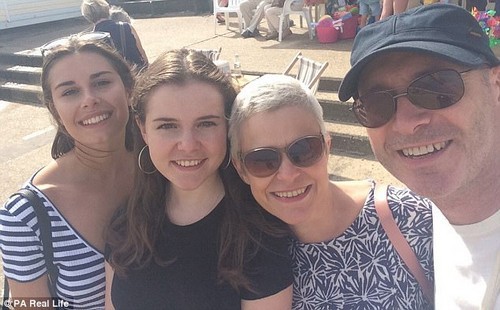 Mrs Oliver said: ‘I’d gone from feeling relatively okay to looking eight-and-a-half months pregnant, like I was expecting a Christmas miracle of my own’ (pictured with her husband Martin, and two daughters Katie and Isabelle)

Mrs Oliver’s brush with cancer began back in October 2016, when she started going to the toilet more often than usual (pictured with Isabelle this summer)

Her GP immediately sent her for a string of tests at Kingston Hospital in Surrey, where an ultrasound detected pools of fluid around her spleen and abdomen.

After speaking with a consultant, it was agreed she needed a CT scan to investigate further.

She said: ‘I asked the doctor exactly what they were checking for and I was told it could be cancer cells in my peritoneum.

‘I didn’t even know what body part they meant, but they explained it was a thin layer of tissue lining my abdomen.

‘On the way home, I Googled it and what I found was awful. It seemed to say any treatment was more about management than cure.’

Days later, the results of Mrs Oliver’s CT scan confirmed there were cancer cells in her peritoneum and her omentum – a double layer of fatty tissue covering the lower abdominal area.

She was transferred to London’s Royal Marsden Hospital, where the type of cancer she had was reclassified as gynaecological, and a treatment plan was drawn up.

On New Year’s Eve, she began a six-cycle course of chemotherapy. She recalled: ‘It wasn’t the way I thought I’d see out 2016.

‘I was terrified of chemotherapy – probably more than of cancer because of the side effects – but everyone on the ward was so lovely that I soon realised my fears were unfounded.

‘We had a slight blip when I developed an allergy to one of the drugs I was given. I could feel my body shutting down bit by bit, before I passed out.

‘Thankfully, doctors brought me round. At first, I was terrified of what might happen if I couldn’t have the drug that was meant to make me better.

‘But the medical team were amazing and managed to tweak my treatment plan to make it work.’

On New Year’s Eve, she began a six-cycle course of chemotherapy. She recalled: ‘It wasn’t the way I thought I’d see out 2016’ (pictured with Katie and Isabelle this summer)

Now, she is working with the charity Target Ovarian Cancer to raise awareness of the signs to look out for (pictured with Katie in Malaga, Spain, just before her diagnosis)

In March this year, Mrs Oliver had a radical hysterectomy and part of her abdominal wall was removed at the Royal Marsden.

HOW TO SPOT OVARIAN CANCER

Ovarian cancer is where the disease originates from the cells in and around the ovary.

In the majority of cases, ovarian cancer affects women over the age of 50, or postmenopausal women.

One in 73 women will develop ovarian cancer in her lifetime.

The two main treatment plans are:

Ovarian cancer ranks fifth in cancer deaths among women and accounts for more deaths than any other cancer of the female reproductive system.

A pathology report also confirmed she had ovarian cancer, which doctors believe was the primary cancer which had spread to her peritoneum and her omentum.

And, after her treatment finished in May, she was declared NED – no evidence of disease – in June.

Now, she is working with the charity Target Ovarian Cancer to raise awareness of the signs to look out for.

She said: ‘You think with something like cancer, symptoms will be loud and clear, but mine weren’t.

‘It’s so important to step out of your busy life for a moment and just consider if everything feels okay, or if anything has changed at all.

‘Target Ovarian Cancer have a fantastic symptom diary app that I’d encourage anyone to use.’

Mrs Oliver is also in training for a 14-mile walk, called the Marsden March, to raise money for the Royal Marsden Cancer Charity, as a thank you to everyone who looked after her.

She continued: ‘Every Christmas, we have a tradition to go to a carol service.

‘I remember last year, sitting there thinking, “How many more Christmases am I going to see?”

‘But the human kindness I saw while I was in hospital got me through the holidays.

‘This has made me incredibly thankful for NHS staff, and how kind and passionate they are.’

Anyone willing to sponsor Mrs Oliver’s walk can do so here.

Officer donates part of his liver to save baby’s life