Love Island star Chris Hughes broke down in tears as he revealed he has ‘suffered silently’ with his mental health issues.

The 24-year-old, who won this year’s series of the reality TV show, has overcome a crippling battle with anxiety and panic attacks in the past.

Speaking at an emotional press conference at an event to mark World Mental Health Day, he begged men to stop ‘bottling things up’ like he did.

Hughes, who is now an ambassador for a campaign launched by Calm and Topman, slammed the culture of telling men to ‘man up’ and play down their feelings.

Suicide – often led to by depression, anxiety and other mental health conditions – is the biggest killer of men under 45 in Britain, Government data shows.

His comments were prompted following his tear-infused water advert earlier this week, which he revealed was just a stunt to promote mental health.

Hughes revealed that L’Eau de Chris was designed to symbolise the fact that 84 per cent of UK men say they bottle up their emotions, YouGov statistics show. 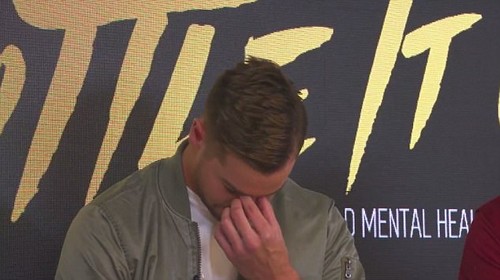 Before he broke down in tears, he said: ‘I suffered silently initially and that was the issue, there’s the phrase ‘suffering silently’ and that’s where things were tough for me, when I opened up to my mum things became easier and stuff.’

Hughes added: ‘Yesterday everyone was shocked that I had literally bottled my emotions in a water bottle infused with my tears.

‘And as the L’Eau de Chris name suggested, doing that would have been ludicrous; yet this is what men across the UK are doing every single day.

‘What’s really ludicrous is that suicide is still the single biggest killer of young men in the UK. We live in a culture that encourages men to “man up” and bottle things up.

Hughes tickled fans when he appeared in an ad promoting his own water bottle with the tagline ‘mineral water infused with a Chris Hughes tear’.

The clip, now known to be part of Calm’s #Don’tBottleItUp campaign, showed him drinking the water before crying into the bottle. 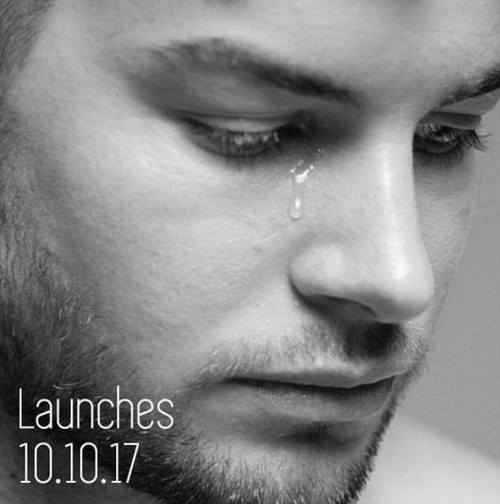 The clip, now known to be part of Calm’s #Don’tBottleItUp campaign, showed him drinking the water before crying into the bottle

A YouGov survey showed 43 per cent of men don’t open up about their inner battles because they don’t want to worry anyone. Slightly less than half said they prefer to sort it out themselves.

It also revealed how men are much less likely than women to open up face-to-face, over the phone or by text about their feelings.

Hughes added: ‘We want to show men across the UK that it’s OK to open up instead of bottling it up.

WHAT THE EXPERTS THOUGHT…

Love Island viewers turned on Olivia for belittling emotional boyfriend Chris as he had to wipe away his tears in one episode.

The widely criticised contestant told her partner on last night’s episode to ‘man up’ after he became emotional over their plastic baby.

Social media was ablaze with viewers declaring their adoration for the 22-year-old, from Cheltenham, for having to wipe away his tears. His motorsport girlfriend said being upset was the wrong example to set their baby boy.

Dr Mark Winwood, a member of the British Psychological Society, told MailOnline that such remarks fuel the belief that men shouldn’t cry, causing them to hold onto their emotions instead of seeking help.

Dr Winwood said: ‘First and foremost what that comment has done is raise the challenge that men have when it comes to feeling emotional.

‘As psychologists, we are really keen on breaking down these negative stereotypes that being emotional is weak. It’s simply not true.

‘Demonstrating emotions should be seen as a sign of strength rather than one of weakness.’

Dr Winwood, AXA PPP Healthcare’s director of psychological services, added: ‘We want young men to demonstrate their emotions as they are then more likely to get help.

‘We want to see suicide rates going down in young men. Telling them to hide their emotions is doing the exact opposite of what we want.’

‘I’ve got personal experience of the benefits of opening up and expressing emotion, which is why I want to work with this incredible charity in its mission to making life less miserable for thousands of other men who are suffering inside their own heads.

‘Our message to all guys is: however you open up, just #DontBottleItUp.’

Hughes has already been praised by mental health experts for candidly displaying his emotions on the ITV2 show this summer.

Love Island viewers turned on his blonde bombshell girlfriend Olivia Attwood, 26, for belittling him as he had to wipe away his tears on one episode.

Twitter was swarmed with support and praise for Hughes, who previously admitted he had overcome a crippling battle with anxiety and panic attacks.

Experts told MailOnline in July that such negative comments are fueling the taboo that ‘big boys don’t cry’ and could potentially drive male suicide rates up.

James Scroggs, chairman of Calm, said: ‘Both on and off screen, Chris has been widely praised for opening up about his emotions.

‘As an ambassador for Calm and the face of the #DontBottleItUp campaign, Chris will use his profile to help us to challenge a culture that prevents men from opening up and seeking help when they need it.

‘With suicide continuing to be the single biggest killer of young men in the UK, it’s vital that we show that it’s OK to open up and ask for help if you need it.’

All proceeds will go to Calm, and Topman will also donate £2 from every pack of its boxers sold between now and the end of the month.

For confidential support call the Samaritans on 116123 or visit a local Samaritans branch, see www.samaritans.org for details.