A mother-of-two will be enjoying a very special Champagne toast on Christmas Day with the donor who saved her life.

Ever since receiving a stem cell transplant in May, 2015, Nicky Turkoz has exchanged poignant anonymous cards and letters with the stranger who donated her bone marrow.

But it was only a few months ago, that the 53-year-old finally met her ‘heroine’ – healthcare assistant Annette Hamson. They’ve now had two face-to-face meetings and speak every day.

And on Christmas Day at 3pm, the two women with the remarkable bond, have arranged to FaceTime each other – and toast their newfound friendship.

Now Nicky, from Bournemouth, Dorset, has released the touching notes the pair sent to each other, that were simply signed off ‘your donor’ and ‘recipient’.

‘Thanks to you this Christmas is going to be fun-filled and happy. I will be able to celebrate with my family, doing the things I planned to do.’

Her donor, who regularly wrote back, responded: ‘There’s no need to thank me, it was a pleasure donating.’ 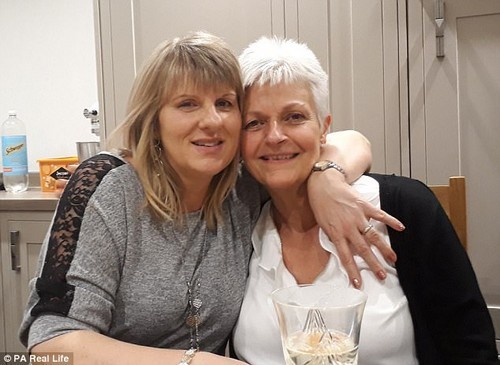 Nicky Turkoz, right, was diagnosed with acute myeloid leukaemia in December 2014 – here she is pictured with her donor Annette Hamson 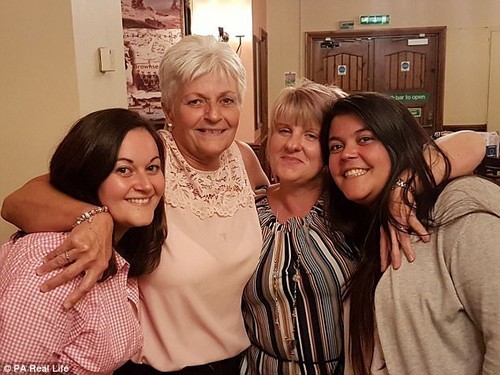 The 53-year-old, pictured with her daughters and her donor Annette, received a stem cell transplant in May, 2015

Just three years ago, in December 2014, Nicky, who has two children, Meltem, 26, and Zeynep, 22, was fighting for life, after being diagnosed with acute myeloid leukaemia – cancer of the blood cells.

‘I was struggling with my regular gym class, but I’d just turned 50 and I thought it was part of getting older,’ she explained.

‘I had an appointment with the doctor, just to be safe, and he recommended a blood test.

‘They had an appointment for the next day, so I went back for that and then went home to put my Christmas tree up and didn’t think much about it.’

Single mother Nicky – currently a full-time carer for her father – pulled the tree down from the attic with Meltem, when the phone rang. 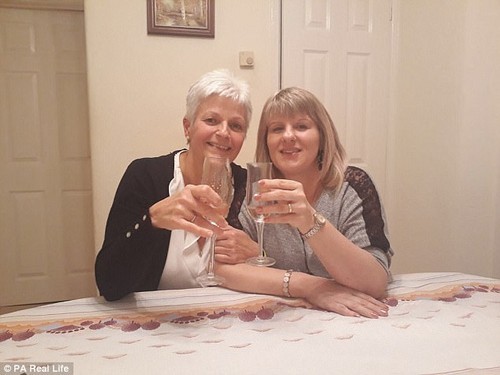 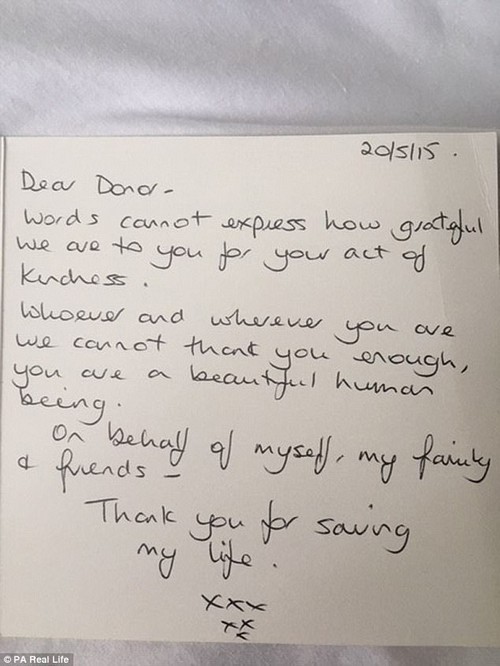 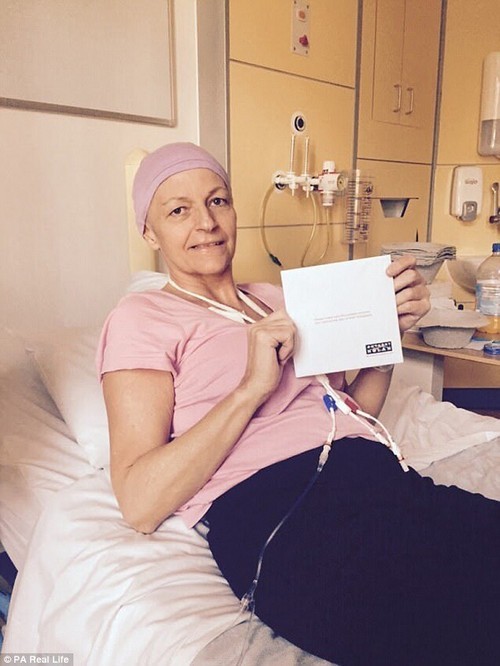 ‘It was the doctor, telling me that the blood tests showed I was very anaemic,’ she continued. ‘They wanted me to go to hospital. I said I’d just finish getting the tree sorted, but they told me that I needed to go now, so we just had to drop everything.’

Admitted to the Royal Bournemouth Hospital on December 10, medics then gave her the shock diagnosis.

She said: ‘I was relieved that they knew what it was, but I don’t think I really understood what would happen. It all happened so fast from there.’

Nicky was admitted to hospital and told she would start chemotherapy two days later.

An in-patient for more than a month, she was in hospital over Christmas and New Year.

‘It was really hard, but my girls visited me every day,’ said Nicky. ‘My youngest daughter, Zeynep, was working in Lanzarote as a holiday rep, but she came home for a year to be with me.’

Donor had signed up decades ago and forgot about it

Although the treatment was successful, doctors told Nicky that she was at very high risk of relapse without a stem cell donor – a procedure in which cells from the bone marrow are harvested to help the body produce healthy blood cells again.

Keen to stay healthy, Nicky was delighted when, within weeks, doctors found a suitable match.

At the time, neither donor nor recipient knew anything more than scant details about each other, but it has now been revealed that Annette, 49, from Northampton, was the woman who saved Nicky’s life. 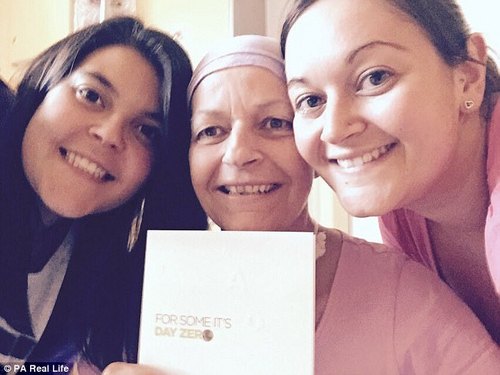 Nicky, with her daughters, on the day she received her stem cell transplant 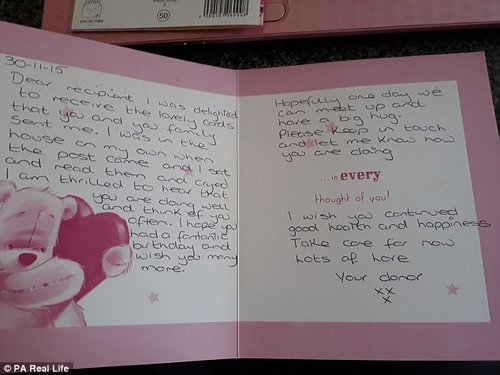 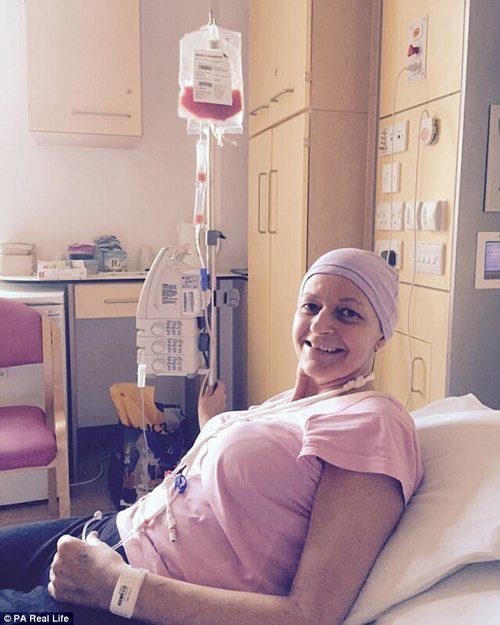 WHAT IS ACUTE PROMYELOCYTIC LEUKAEMIA?

APML accounts for around 10-15 per cent of all cases of AML.

The myleloid cells perform a number of different functions, such as fighting bacterial infections, defending the body against parasites and preventing the spread of tissue damage.

In APML a change in a specific chromosome leads to a changes in white blood cells called Promyelocyte cells, which means they do not progress to maturity.

This leads to a bleeding disorder due to abnormal clotting.

The symptoms include pale skin, tiredness, breathlessness, frequent infections, and unusual and frequent bleeding, such as bleeding gums or nosebleeds.

The main treatment for AML is chemotherapy, which is used to kill as many leukaemia cells in your body as possible and reduce the risk of the condition coming back (relapsing).

In some cases, intensive chemotherapy and radiotherapy may be needed, in combination with a bone marrow or stem cell transplant, to achieve a cure.

Studies have shown that people with acute promyeloid leukaemia (APML), around 85 per cent will live for at least five years with treatment.

Annette, who signed up to the register 28 years earlier after a little girl in her son Daniel’s playgroup class was diagnosed with blood cancer, said: ‘Both my husband, Andre and I had signed up, but we had forgotten all about it.

‘It was such a long time ago. So, I was shocked to get the call.

‘I said yes, but it did take me a little while to think about it afterwards. I went to the appointment to get my blood tested and it took me a while to pluck up the courage to go in, but once I had committed, it felt like I was doing something good.

‘It was quite quick – I got the call in December and then donated in May. I had to spend three days in hospital while they took the cells, but I was able to go back to work straight away.

‘It was painful but manageable – nothing I couldn’t handle.’

‘We built a relationship’

At University Hospital Southampton, Nicky received Annette’s lifesaving cells and almost immediately wrote to her to say thank you.

For the first two years after the transplant, donors and recipients can make contact through the Anthony Nolan charity, but must remain anonymous.

Annette, who is mother to labourer Daniel, 30, healthcare assistant Emma, 28, electrician Jack, 21 and trainee estimator George, 19, said: ‘I always hoped that the recipient would write to me, so getting that card meant so much.’

‘Soon we were writing back and forth to each other,’ Nicky added. ‘It took some time, our letters had to be passed through the hospital, to the charity and then onto Annette, but we built a relationship.

‘When it came to a year since my diagnosis and my first Christmas since the transplant, Annette wrote to me and said she would raise a glass for me on Christmas day at 3pm, so we did the same in my house. We just said, “Thank you to my donor”.’

‘We just felt a connection’

This summer, two years since the transplant, Annette and Nicky were able to receive each other’s names and details for the first time, enabling them to get to know each other properly.

Nicky explained: ‘We started texting, because I wanted to save speaking to her for the first time we met up. We realised that Annette has family who live just round the corner from me in Bournemouth and she would be down here, so we agreed to meet up in September.’

They enjoyed dinner at a local restaurant with Nicky’s daughters and immediately bonded. 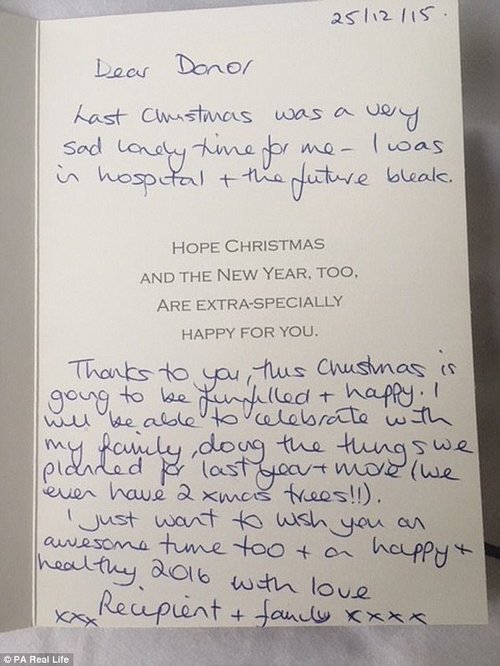 Nicky said: ‘The minute Annette walked in, we just felt a connection. We’re both a similar age and we were both really emotional. It was an amazing moment.’

Similarly, Annette says they share so much that they have even discovered they are reading the same book.

Nicky has even invited Annette to her daughter’s wedding in June next year where she will be the guest of honour.

Nicky added: ‘What Annette has done for me is incredible and I think I will want to recognise that every year. To think that three years ago, I was seriously ill and now I am doing really well.

‘That’s all thanks to Annette. I can’t thank her enough and I know that we will be friends for life.

‘I really hope that our story will inspire others to sign up to the register and support Anthony Nolan. It’s really simple to register but can save someone’s life.’

If you’re between 16 and 30 and in good health, you can sign up to the Anthony Nolan register (you’ll stay on it until you turn 60).

Then you will be sent a spit kit in the post so that you can give us a quick saliva sample.

Whenever a patient with blood cancer or a blood disorder needs a lifesaving stem cell transplant, the register is searched to look for someone who is a genetic match for that patient.

Around nine out of 10 people donate their stem cells via the bloodstream, in a straightforward process called peripheral blood stem cell collection.

It does not hurt to donate bone marrow or stem cells.

Just one in 10 donors will have their stem cells collected via the bone marrow itself, while under general anaesthetic.

If you’re on the register, you need to be happy to donate your stem cells via either method.

Find out more by visiting here.

Patients may not be able to get painkillers on the NHS