New Hampshire’s chief medical examiner Dr Thomas Andrew has been retiring for over a month now, but he has not yet been able to leave his office because of the amount of opioid overdose victims he is responsible for.

He has been the chief medical examiner for 20 years, and Dr Andrew, 60, forecasted the devastation of the opioid crisis before officials knew about its severity.

Dr Andrew, who is retiring five years early, says that he tried to warn lawmakers of the potential of the opioid crisis when he saw it coming over ten years ago. However, by the time they began paying attention, the epidemic had taken effect.

Drug overdoses killed about half a million Americans between 2000 and 2014, and each year the death rate is going up, as opioids shave time off the US life expectancy rate.

During the first week of September, Dr Andrew announced his retirement, but he still had 83 open cases he was responsible for before he could leave. ‘In this business you can’t leave open cases behind,’ he explained.

Now, he’s gotten that number down to 19, and he hopes to wrap them up in the coming weeks.

In the two decades that Dr Andrew spent examining New Hampshire’s deceased, he saw the US’s opioid epidemic slowly rise to its current state. ‘It clearly has changed the entire face of our practice,’ he explained.

The legal versions of fentanyl are prescribed to alleviate severe pain associated with advanced cancer.

Illegally-made fentanyl, which can be ordered from China or bought from Mexico, is often mixed with heroin or cocaine.

Other names for the drug purchased on the dark web or from a trafficker include:

When he first came to New Hampshire, arriving from New York City where he worked as a medical examiner in Manhattan, Brooklyn and Staten Island, the state saw 30 to 40 drug overdose deaths a year. Now, as he is leaving, that number is pushing 500.

Dr Andrew spoke about the frustration he felt when, around 2004, he noticed the pattern and alerted lawmakers about the growing problem to no avail.

He remembered trying to explain to public officials that if the rate of deaths caused by traffic accidents or asthma was shooting up so quickly, everyone would be panicked.

But Dr Andrew said that politicians only responded to his warning cries with the claim that drug overdoses affected certain populations which they did not feel it was worth their time to invest in at the time.

However, as the crisis escalated and the epidemic began affecting people from all corners of the state, people started to pay attention, he explained. ‘They can no longer hide behind that,’ Dr Andrew said.

‘They finally are up in arms now. That’s all you can read about until some lunatic shoots people in Las Vegas,’ he said.

Another reason he had a hard time convincing lawmakers of the epidemic’s seriousness was because of the population that he as a medical examiner was representing.

‘Dead people don’t vote anymore. The dead are not clamoring for public services,’ he explained. 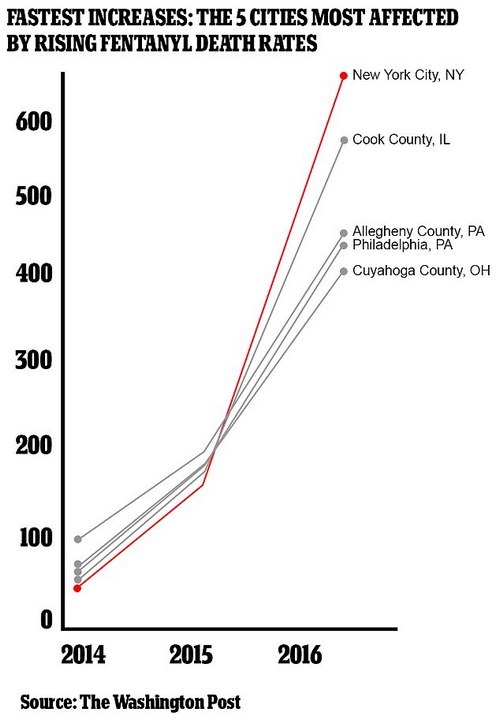 But Dr Andrew emphasized problem’s urgency, adding: ‘What the dead tell us is very important information’ for public health.

Dr Andrew said that there were two moments that illuminated how bad the opioid epidemic had the potential to be during his time serving New Hampshire.

The first came in 2005 when the number of people who died from prescription drug overdoses hit an all-time high. ‘We thought: “Gee, there’s a real problem here”,’ Dr Andrew remembered.

HOW MANY AUTOPSIES CAN FORENSIC PATHOLOGISTS PERFORM?

If a forensic pathologist at a medical examiner’s office performs more than 250 autopsies in one year, their office will be at risk for losing its National Association of Medical Examiners (NAME) accreditation.

Exceeding 325 autopsies results in automatic loss of the title for their office.

Dr Brian Peterson, president of NAME, said that, as offices struggle to hold on to their accredited status, this rule could present a problem at the end of 2017.

He said that if on December 22 a forensic pathologist has done 323 autopsies, they may decide to stop there even if new deaths are presented before January 1.

Peterson said: ‘Maybe we’ll be storing a few bodies until 2018.’

He also recalled predicting at that time that drug overdose death rates would soon surpass that of traffic accidents. Although he received backlash for the comment, he was right, and his state was one of the first in which this happened.

‘New Hampshire doesn’t lead the pack in a lot of things, but in that way it did,’ Dr Andrew said.

The second light bulb moment for Dr Andrew came in 2013 when he heard about the first deaths that were caused by a combination of heroin and fentanyl, a synthetic opioid that has ravaged America’s urban centers.

‘Nobody had seen that before,’ Dr Andrew said. But
that soon changed: the rate of people in US cities who were killed by the drug, which can be 50 times stronger than heroin, shot up 600 percent from 2014 to 2106.

‘Then heroin started dropping off the map,’ Dr Andrew said, explaining that people were, more and more, dying of fentanyl overdoses in his state.

And the crisis has taken such a toll on his office that they are risking losing their National Association of Medical Examiners (NAME) accredited status this year.

The number of people dying from opioid overdoses is rising so quickly that medical examiners’ offices across the country cannot autopsy them all.

If offices were to autopsy each victim, many would surpass the number that NAME says they can do and keep their accreditation.

The association claims that if offices do more than they recommend, the reports may not be as thorough and accurate as they need to be.

And losing their accredited status could make them appear less reliable in court, where their work in crucial in holding suspected criminals accountable.

Dr Andrew is leaving his office at a time of uncertainty for his industry, as efforts to control the opioid crisis continue to fail. After dedicating his career to the study of dead people, he plans to begin seminary school in January.

He reflected on his career, saying: ‘This is a humbling job that really lets you into the lives of people at such a profoundly sensitive time for them.’

‘You’re the only one speaking for the dead,’ he added.

The most googled health questions of 2017

Healthiest parents struggle to save kids from fatty foods

Bad Food Bible explains why clean-eating is bad for you