Nutritionists have expressed concern over a dangerous new fad diet which bans everything but water, tea and coffee.

Water Fasting involves trying to lose weight by eating no food and only taking in the three beverages.

The trend has become popular on social media with thousands of people using the hashtag #waterfast to document their progress and encourage others to take part.

But critics have warned it could be ‘the most dangerous diet ever’ and said that it was taking the trend for cleansing way too far.

Eating disorder expert Joanne Labiner likened Water Fasting to conditions like anorexia and said it should be avoided, especially at a time of year when people are considering slimming down after Christmas.

She said: ‘It can be so bad for your organs. That’s why people with anorexia can die of a heart attack. Their body feeds on their heart.

‘Our body thinks it’s an emergency and tries to prevent that fat storage from being used up, and it feeds on the muscle’.

Others said that they got the ‘best sleep of my life’ once they started it.

One man claimed to have set out to do it for 47 days and, whilst he initially felt energised and focused, said he was forced to stop after 28 days.

Another dieter, who lost 3stone 9lbs, said that he was forced quit because he was so tired he could barely get out of bed.

Yet others were still convinced it could work with one writing: ‘Here goes……!!! Back at it again, #waterfasting time.

‘Anyone who wants to join me and go threw this pleasurable pain and suffering with me is more than welcome 2 because its a lot easier when you got somebody you know who’s suffering with you lol (sic)’. 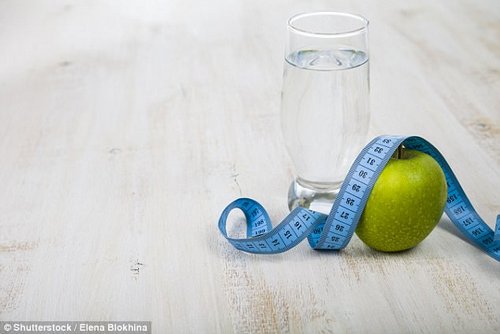 Eating disorder expert Joanne Labiner likened Water Fasting to conditions like anorexia and said it should be avoided, especially at a time of year when people are considering slimming down after Christmas

NHS guidelines say that if you want to lose weight you should lose no more than 2lbs a week if you want it to be sustainable.

He suggested that water fasts were appropriate for clients who are obese or have Type 2 diabetes – but only under the supervision of a doctor.

He said: ‘It can be done, people do them, but they have to be done safely.

‘I don’t think it’s the safest thing to do, but if you’re obese, it’s not the most dangerous thing, either. If you’re relatively slender, it’s more dangerous’.

Dr Fung, who wrote a book called ‘The Complete Guide to Fasting’, added: ‘The longer you (fast) the more risks you take’.

Why Heart Surgery May be Better in the Afternoon

If the entire US went vegan, it’d be a public health disaster