For Christian Guardino, a senior at Patchogue-Medford High School on Long Island, the most remarkable part about performing on America’s Got Talent a day before his 17th birthday earlier this year wasn’t winning the golden buzzer that showered gold confetti on him and sent him into further competition.

It was seeing the confetti thanks to his gene therapy several years ago.

‘I walked out on that stage all by myself,’ he said. ‘I saw the judges. It was incredible.’

His mother, Beth Guardino, said the judges didn’t know about Christian’s blindness and gene therapy until after his audition.

Before treatment, ‘it was dark, life without light,’ Christian said. ‘I found a way to work through it, to cope with it, and that was music.’

He had mere glimmers of vision and was destined to lose even that because of an inherited eye disease with no treatment or cure. 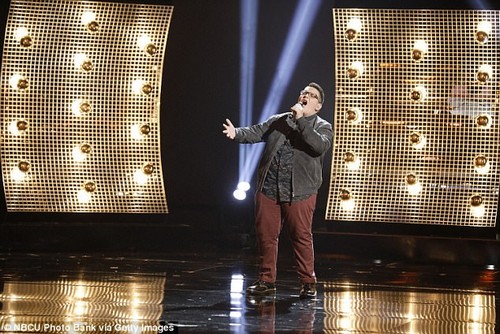 Christian Guardino, 17, was on the brink of total blindness several years ago when he got gene therapy which cured him of the inherited disease which was robbing his sight. Years later, in 2017, he wowed judges on America’s Got Talent, reaching the semi-finals 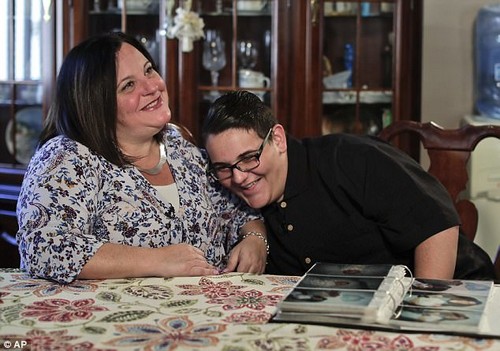 Never thought it was possible: His mother Beth Guardino at their home in Patchogue, New York

Since treatment, ‘I’ve been able to see the most incredible things. I’m able to see stars, I’m able to see fireworks, snow falling,’ he said. His favorite? ‘The moon. Most definitely. I’m a huge astronomy fan.’

Now, other children may get to feel the same euphoria.

On Thursday, U.S. Food and Drug Administration advisers will consider whether to recommend approval of a gene therapy that improved vision for these three youths and some others with hereditary blindness.

It would be the first gene therapy in the U.S. for an inherited disease, and the first in which a corrective gene is given directly to a patient. Only one gene therapy is sold in the U.S. now, a cancer treatment approved in August that engineers patients’ blood cells in the lab.

HOW DOES IT WORK?

The therapy has wider implications but was tested for Leber congenital amaurosis, or LCA, caused by flaws in a gene called RPE65. Those with it can’t make a protein needed by the retina , tissue at the back of the eye that converts light into signals to the brain that lets us see. People often see only bright light and blurry shapes and eventually lose all sight.

Parents are carriers of the flawed gene and it can lurk undetected for generations, suddenly emerging when an unlucky combination gives a child two copies of it.

‘It’s usually a surprise that they have a blind child,’ said Dr. Jean Bennett, a University of Pennsylvania researcher who with her husband, Dr. Albert Maguire, led testing at the Children’s Hospital of Philadelphia. The couple designed an obstacle course to test vision after treatment, and the FDA accepted it as a valid measure of success.

‘The maze was actually Al’s idea. I put it together first in our driveway,’ using white tiles with arrows, foam rolls and cones, and black spaces to simulate holes that kids should avoid, Bennett said.

Maguire did many of the 45-minute operations to deliver the gene therapy; the rest were done at the University of Iowa. It involves puncturing the white part of the eye and injecting a modified virus that contains the corrective gene into the retina. Benefits appear within a month. 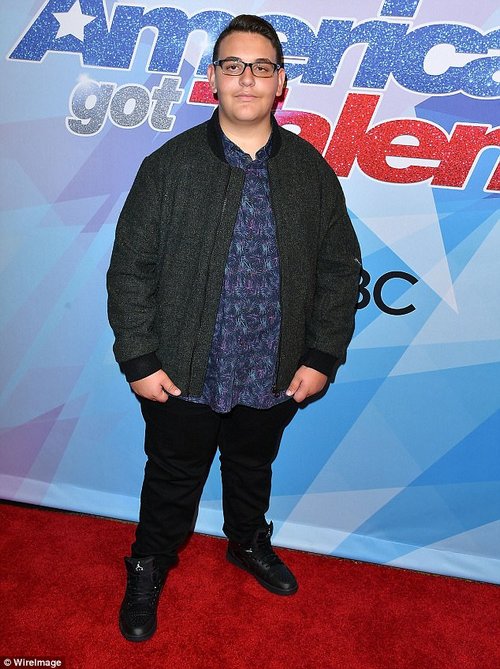 Before treatment, Christian (pictured at the August premiere) had mere glimmers of vision and was destined to lose even that because of an inherited eye disease with no treatment or cure

Eighteen of 20 treated study participants improved on the mobility maze a year later, and 13 passed the test at the lowest light level. None in a comparison group of nine patients did. That group was allowed to get the therapy after waiting one year, so in all, 29 were treated, plus more in earlier studies. The two who did not improve may not have had enough healthy retinal cells to respond to treatment; one improved on other tests and another stopped deteriorating.

About half of those treated were able to read three or more additional lines on an eye chart, but the variability between the groups was too big to be sure, statistically, that they were different on this measure.

Many are no longer legally blind and gained independence.

‘There were children who were able to move from a Braille classroom to a sighted classroom. One person who had never worked was able to get a job,’ said Dr. Katherine High, president of Spark Therapeutics and the scientist who pioneered the therapy when previously at the children’s hospital.

There were two serious side effects, both deemed unrelated to the gene therapy itself. One was due to a drug given afterward and another wa
s a complication of the surgery.

Children, parents, doctors and scientists will tell the FDA panel what it’s like to lack and then gain one of our most primal senses.

Cole Carper, an 11-year-old boy who got the therapy when he was eight, describes how sight changed what he knew of the world. When he returned to his home in Little Rock, Arkansas, after treatment, ‘I looked up and said, ‘What are those light things?’ And my mom said, ‘Those are stars.’

His sister, 13-year-old Caroline Carper, treated when she was 10, said that afterward, ‘I saw snow falling and rain falling. I was completely surprised. I thought of water on the ground or snow on the ground. I never thought of it falling,’ because the sky was something she couldn’t see, along with other things like her mother’s smile. 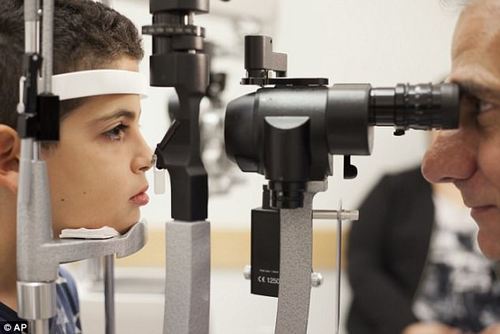 Dr Albert Maguire checks the eyes of Misa Kaabali, eight, at the Children’s Hospital of Philadelphia

The treatment , Luxturna, is made by Philadelphia-based Spark Therapeutics. It does not give 20-20 vision or work for everyone, but a company-funded study found it improved vision for nearly all of those given it and seemed safe. The company’s Nasdaq ticker symbol is ONCE, for how often it hopes the therapy is needed.

‘It’s exciting’ and in some cases might be a cure, although how long the benefits last isn’t known, said Dr. Paul Yang, an eye specialist at Oregon Health & Science University who is testing gene therapies for other companies. ‘There’s nothing else for these kids.’

‘WHOA, MOM, WHAT IS THAT?’: HOW COLE WAS STUNNED BY SEEING NERF GUNS IN TARGET

Ashley Carper recalled when her children were diagnosed with the disease.

‘The doctor came out with tears in his eyes. He said it was the same condition and they will be blind, and nothing could be done. Nothing.’

Cole and Caroline used canes and went to a school for the blind.

‘Cole played football but he played center,’ and just stood on the field after the snap to the quarterback because he couldn’t see well enough to do more, his mother said.

Ten years ago, she went to a support group conference and happened to sit next to Bennett. It took two years for gene testing to determine whether the Carper kids would qualify for the study, and insurance wouldn’t pay because there was no established treatment. A Dallas hospital picked up the tab.

Finally, the siblings were enrolled in the study, but they landed in the comparison group so they had to wait a year to be treated. About a week after Cole’s treatment, they went shopping at Target.

‘When we got to the Nerf aisle I was like, ‘Whoa, mom, what is THAT? Can I get this? Can I get that? Because I had never seen what that stuff looked like,’ Cole said.

Caroline has had her own delights.

‘Oh yikes, colors. Colors are super fun,’ she said. ‘And the sunshine is blinding.’

NEXT STEPS: WHY THE MILLION-DOLLAR PRICE TAG MIGHT CAUSE THE FDA TO VETO IN JANUARY

The FDA must decide by January 18 whether to approve Luxturna. What it might cost is a worry. One gene therapy sold in Europe cost $1 million and was used by only one or two people; another has had few takers.

Spark’s chief executive, Jeff Marrazzo, would not give an estimate for cost, which companies usually announce only after approval. Some rare disease treatments run a quarter to three-quarters of a million dollars a year. Spark has talked with insurers and ‘there is a clear path for it to be reimbursed one time per eye,’ he said.

More than 260 genes can cause inherited retinal disorders, affecting three million worldwide. RPE65 mutations can cause other vision diseases besides LCA, so if the treatment is approved, it should be for people with the flawed gene rather than a specific disease, said Dr. Eric Pierce at Harvard-affiliated Massachusetts Eye and Ear, who was involved in its early testing.

Laura Manfre founded Sofia Sees Hope, a group named for her 14-year-old daughter, Sofia Priebe, who has LCA but not the gene Luxturna targets. The Connecticut woman will represent families at the FDA hearing.

Sofia said she longs for a therapy that would let her ‘drive a car, walk into a room and be able to identify my friends, to be able to do my own makeup and to read a book in print… and see the night sky.’