A 35-year-old woman had to terminate four pregnancies in a row after her placenta kept attaching to c-section scar tissue, a new case study reports.

She delivered her first two children by cesarean section, but her next four were rare, life-threatening cesarean scar pregnancies (CSPs).

The amniotic sac the fetus would have grown in, became deeply lodged in her cesarean scar tissue each time, increasing the risk that her placenta would not have come out when she tried to deliver, and she likely would have bled to death.

On her fifth attempt to have another child, the woman developed yet another CSP, but bravely went forward with the pregnancy, and both she and the baby survived a dangerous early c-section at New York University Langone Health Center.

A CSP greatly increases the risk of a morbidly adherent placenta (MAP), the medical term for the placenta growing too deeply into the wall of the uterus. 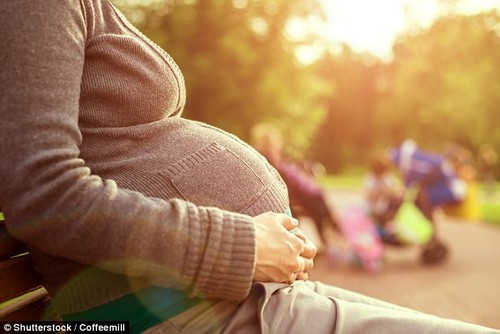 A woman suffered through the terminations of four abnormal pregnancies in a row, before choosing to carry on with the fifth, risking her own life (file image), according to a new NYU Langone Medical Center case report

In a normal pregnancy, the placenta comes out with the baby during delivery, which is why the sac is sometimes called the afterbirth.

But in a MAP, to placenta tissue becomes too attached to the uterus. Because the two are joined by so many veins, when a woman tried to deliver, she can end up bleeding uncontrollably, endangering her life.

The condition is so rare – striking about one in every 1,000 to 2,000 pregnant women – that doctors don’t have concrete enough statistics to give women their odds of having an otherwise normal pregnancy.

Not every CSP becomes a MAP, and not all MAPs develop on c-section scar tissue. Some women’s placentas simply grow in such a way that they cover the entire narrow opening at the bottom of the uterus, called the cervix.

But the scar tissue that develops after a c-section certainly increases the odds that the placenta will latch tightly onto the thicker tissue as it develops, and that risk goes up with every c-section.

The condition is also more common in women who get pregnant by IVF, later in life or have had other uterine problems or surgeries.

But even among the nearly 1.3 million women who have c-sections each year, very few later have CSPs.

For the woman, whose story was told in an anonymous case study published by Ultrasound in Obstetrics & Gynecology, the abnormal condition just became what she expected out of a pregnancy.

Why cesarean scar pregnancies can kill

Cesarean scar pregnancies (CSP) are extremely rare, affecting about one in every 1,000 to 2,000 pregnancies.

In a normal pregnancy, the placenta develops within the uterus and will come out when the baby is born.

In a CSP, it attaches to old cesarean scar tissue and many blood vessels connect the two.

As a result, when it’s time to deliver, the sac does not want to come out, causing the blood vessels to tear, and the woman to bleed out.

CSPs are usually diagnosed early, and there is little doctors can do but monitor them and hope that the pregnancy is otherwise normal.

Because they are so high risk, some women terminate CSPs.

Even with a c-section delivery, going into to labor can cause life-threatening bleeding for the mother.

Doctors can typically diagnose a pregnancy like hers by ultrasound around 15 to 20 weeks.

After each of the woman’s previous four diagnoses, the high-risk pregnancies had been terminated.

So when she came to Dr Terri-Ann Bennett, a maternal-fetal specialist at New York University’s Langone Medical Center in 2015, the woman was already anticipating the diagnosis.

Sure enough, she had a CSP, for the fifth time in a row, something totally unprecedented in medical literature.

But this time, she was determined to do everything she could to carry to term.

Not all MAPs are fatal, especially if doctors are able to diagnose them early, monitor them closely and put a team in place ahead of delivery.

Dr Bennett and her patient stayed the course, making sure she had ultrasounds every two to four weeks.

But the placenta continued to grow more deeply-rooted into the uterus. Eventually, it covered her cervix, blocking the opening the baby should have been born through.

Finally, at 34 weeks, Dr Bennett and her team decided to do another c-section to deliver the baby. The delivery caused the woman so much blood-loss that she had to have a transfusion.

The surgical team immediately performed a hysterectomy, removing the woman’s uterus so she wouldn’t have further bleeding or another CSP.

The hysterectomy also means that the 35-year-old woman will not be able to have any more children, and will go into early menopause, but she and her baby both survived their harrowing ordeal.

Human intestines have been grown in the lab

The Evolution of a Scientific American Graphic: Pregnancy in Progress