From late nights socialising to excited children waking us up early, Christmas is a time when our sleep can take a hit.

But while you may be conscientious about making sure you’re sober before you get behind the wheel, many of us think nothing of driving after not getting enough shut eye.

Indeed, one in five fatal road crashes in the UK and Ireland are fatigue-related, according the Royal Society For The Prevention Of Accidents.

Being awake for 17 to 19 hours and driving makes you virtually legally drunk – it’s considered the same as having a blood alcohol content of 0.05 per cent (this is the drink drive limit in Scotland, in the UK and Ireland it’s 0.08 per cent), according to the University of New South Wales in Sydney.

To show the effects sleep deprivation has, Dublin-based company Easca Mattress has created a game called Don’t Hit Deidre where you can test your reaction time. So try it for yourself – could you save the bunny? 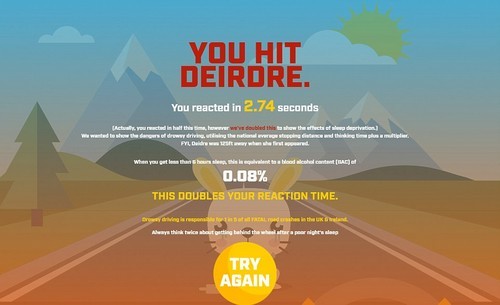 The game shows the dangers of so-called ‘drowsy driving’, using the national average stopping distance and thinking time, plus a multiplier to allow for sleep deprivation 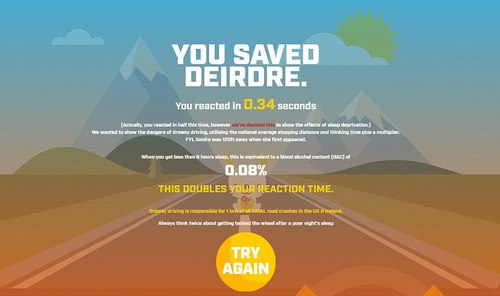 Fatigue is a major contributory factor in crashes in the UK, with too little sleep radically affecting driver attention, awareness, reaction time and ability to control the vehicle.

Peak times for fatigue-related crashes are within the hours of 2am and 6am and 2pm and 6pm when drivers are naturally more sleepy.

Drivers at 6am are 20 times more likely to fall asleep at the wheel than at 10am.

Research has shown motorways and dual carriageways are the most common roads for sleep-related crashes, due to the monotonous road environment and lack of interruptions or driver stimulation.

Crashes caused by drivers falling asleep typically involve vehicles running off the road or into the back of another vehicle. They tend to be high-speed crashes, because drivers do not brake before crashing, so the risk of death or serious injury is high.

At-work drivers are particularly at risk from tiredness, because they typically spend longer hours at the wheel, with four in ten tiredness-related crashes involved someone driving a commercial vehicle.

Male drivers are more involved in sleep-related crashes than females. Drivers under 30 are at higher risk than older drivers, and are most likely to crash due to tiredness in the early morning after little or no sleep.

5 ways to cope when with you’re overwhelmed with anxiety

How long can you keep Christmas leftovers in fridge