Sex is great – except when it’s excruciating and humiliating and lands you in hospital.

And ER doctors and nurses are the ones who see it all – and have to help the patient without giggling.

Men’s Health asked medics what the most horrendous intimacy-related injuries they had come across were.

From the distressing, to the downright dumbfounding, here are their answers…

‘The hot sauce her partner consumed prior to the sex act left mild burns on her genital region.’

‘While I was a general surgery resident, I encountered some ‘unique’ objects lodged in the rectum – in medical speak, “rectal foreign bodies,” explained Joshua Zuckerman, a plastic surgeon in New York.

‘In one case, we had to surgically remove a pink softball from someone’s rectum, and in another case, a significantly-sized potato.’

David Meyers, an emergency physician based in Newport Beach, California, featured on the show Sex Sent Me to the ER.

He explained how a woman rushed into the hospital he was working in and said she had extreme discomfort in her groin area. She was shifting side to side like she needed the toilet urgently.

Dr Meyers explains that he carried out some tests but was left baffled. Then the patient and her husband explained what really happened.

The amorous couple were spending their first evening alone without their newborn – and to celebrate the occasion they experimented in the bedroom with popping candy, also known as pop rocks.

But when the husband performed oral sex on his wife, the sweets immediately exploded, causing a painful irritation, swelling, and burning sensation.

‘So we irrigated the area, prescribed an antihistamine, and the woman made a full recovery,’ said Dr Meyers.

4. Penis fractured running into a pole – but was that true?

Robert Hartman, a urology specialist in Lake Forest, Illinois, explained that a street sweeper attended ER in agony with a fractured penis.

‘When I met him in the emergency room, he was with his wife, and said he ran into a utility pole,’ he said. ‘That’s the story he told her.’

But Dr Hartman said he knew he was lying – ‘because you can only fracture your penis a few different ways’.

And so the medic asked the man’s wife to leave the room and the patient admitted he’d injured himself in the throws of passion with a prostitute.

The doctor said his wife never found out the truth and the man eventually made a full recovery.

Dr Hartman had another tale to tell. He revealed a college freshman came into the emergency room with severely swollen penis.

‘It was a very, very swollen, angry-looking penis,’ he said. ‘He had a couple little abrasions on the skin of the penile shaft.’ 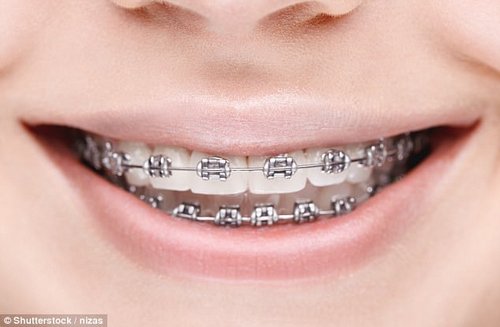 After lots of questioning, the patient confessed that he had received oral sex from another freshman who was wearing teeth braces.

‘The braces had cut open his penis, and whatever food, germs and bacteria were trapped in the braces were feeding into his wounds.’

Thankfully, the man recovered after a course of antibiotics.

Dr Hartman treated a 60-something-year-old man who came in with a wedding stuck on his penis.

The patient had apparently been suffering with erectile dysfunction and after doing some research online decided the object could help with his problem.

‘None of the blood was able to go back into his body,’ explained the doctor. ‘It all got trapped, and his penis was swollen and borderline necrotic.’#

After the local fire brigade were unable to help, Dr Hartman got hold of a saw blade.

‘As we were trying to remove the ring with the tool, it would glow bright orange, like molten,’ he said. ‘It looked just like the Lord of the Rings ring… but on a penis.’

Dr Hartman reported that the man recovered well – and learned that he’d have better success with Viagra pills.

A fitness fanatic was rushed to hospital after getting his penis stuck in a hole in a weight.

The unnamed patient was rushed to hospital, where doctors called in firefighters to free his purple and swollen genitals.

They spent three hours using specialist equipment to free him from the 2.5kg (5Ib 8oz) weight.

They used a grinder and vibrating saw to remove the device.

It is not known how exactly the man managed to get his penis stuck in the plate. 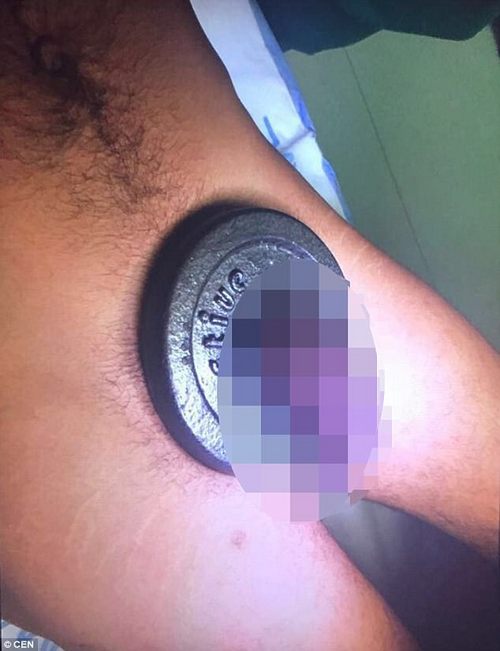 The pictures of the unfortunate mishap emerged after they were leaked online.

The weightlifter went to a hospital in Worms, Rhineland-Palatinate in Germany, with the delicate problem.

The image of the man’s genitals was supposed to be for official use only but it has ended up all over social media.

The hospital that treated the man has launched an investigation to find out how they were leaked.

Amazonian brew that can ‘cure depression and alcoholism’