The trainers of the Star Wars cast have revealed the 25-minute workout they used to get the actors camera-ready.

‘Star Wars: The Last Jedi’ had its European premiere in London last night, with the hugely-anticipated movie featuring the likes of Daisy Ridley, Lupita Nyong’o and the late Carrie Fisher.

The star-studded cast looked in phenomenal shape at last night’s European premiere in London after enduring months of grueling workouts to get them red-carpet ready, as well as able to complete daredevil stunts for the movie.

Behind the actors’ body transformations are the trainers and nutrition experts Chris Vincent and Jack Graves from the LA-based wellbeing management company Altus Health, who ensured the stars ate nutritious, organic food that meant they burnt 500 more calories a day than they took in.

The duo also put the cast through their paces, having them workout up to five times a week, even if it meant exercising between takes at 4am.

Yet, they also promote recovery days at least once a week, even having the actors wear state-of-the-art sleeves that pump hot and cold water onto their arms and legs to prevent injury.

Here, in a piece for Healthista, Chris and Jack share the 25-minute workout the cast squeezed in between takes, as well as discussing the importance of carb-cycling, intermittent fasting and viewing healthy food as treats. 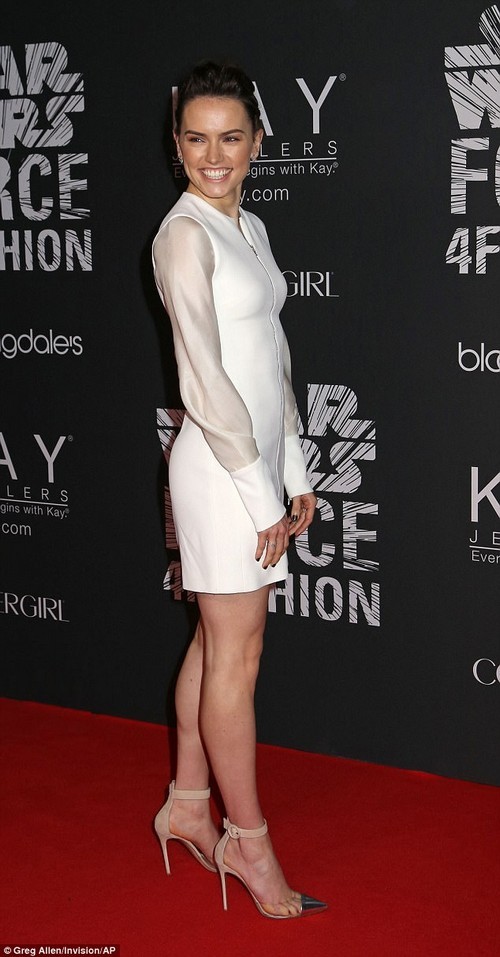 Daisy Ridley, who plays the lead character Rey in the latest Star Wars installment, was put through her paces with grueling work outs between takes at 4am (pictured at the Star Wars Force 4 Fashion event at Skylight Modern in New York)

Trainer and nutrition expert Jack Greaves from the wellbeing management company Altus Health shares the workout he used to get the Star Wars cast camera ready.

Lunge tweak: From a lunge position, touch your hand to your opposite calf while keeping the other arm vertical. Repeat 10 times on each side.

Sumo squat to hamstring: Come from a squat position to touching your hands to the floor. Repeat 10 times.

Shoulder taps: From a plank position, touch your hand to your opposite shoulder, alternating arms. Repeat for 20 seconds.

Kneeling wood chop: From a lunge position, hold a weight and swing your arms in the same direction as your bent knee. Repeat 10 times.

Resistance knee band openers: With a raised hip and the band around your knees, open your legs. Repeat five times.

Resistance band side steps: Walk sideways with the band around your knees. Repeat 10 times in each direction.

Plank row: From a plank position holding weights, bring up each arm so your hand reaches your shoulder on the same side. Repeat 10 times alternating arms.

Burn 500 more calories a day than you take in

Chris said: ‘We work with the chefs on set to make sure they are getting a lot of probiotics such kombucha and fermented foods, prebiotic food such as dark leafy green veg and stalk veg like broccoli which the good gut bacteria feed on to reproduce.

‘We have a high organic vegetable content (they eat a lot of veg). They eat protein which is as clean as possible – organic, free range and grass fed, as well as a lot of deep water wild fish.

‘And then healthy fats like avocados and a lot of coconut oil and olive oil. We like to teach them how to cook healthily at home too.’

Yet, the classic weight-loss trick of counting calories still applies, with the actors ensuring they burnt 500 more calories a day than they took in.

Jack said: ‘At the end of the week, we make sure the calories in are lower than the calories out, with a deficit of at least 500 per week to keep them in good shape.

‘We increase calories if we need to, some people needed to put on weight.

There is no quick-fix

Honing a Star Wars-worthy physique takes serious discipline, with the actors being required to complete vigorous workouts up to five times a week.

Jack said: ‘I would say they train four to five times a week when we have three months to go. It’s a really intense period.

Daisy Ridley even said: ‘Stamina wise you’re like “oh my god”. It’s a psychological thing knowing you can do it more and more.’

The actors took advantage of any spare time they had while filming to get physical, even if that meant exercising at 4am.

Chris said: ‘Whenever there is camera turn around or lunch! We will do recovery, stretching and flushing of lactic acid in between scenes.

‘On other long days the cast will sometimes meet us at 5am before shooting at 7am, before lunch or the end of the day which is sometimes two, three, or four in the morning.’

Although the workout routine was vigorous, Jack stresses the importance of having rest days to allow your body to recover, even using a state-of-the-art sleeve to prevent illness on days the actors pushed themselves too far.

He said: ‘We will make sure they have at least one-to-two days rest in the week where instead, we would do yoga, have a massage or osteopath session.

‘We use something called Game Ready for recovery. It’s a sleeve that goes over the legs and pumps ten minutes of hot water and ten minutes of cold water which helps flush lactic acid.

‘I’m a massive believer in quality over quantity, so if they have had a stressed day, I’m not going to expect them to work out because it’ll only stress the body more, and put them at risk of getting ill.

Chris and Jack believe carbs provide unnecessary calories as numerous studies have shown humans can survive without them. Yet, cutting the major food group out of your life may be unrealistic for some.

Jack said: ‘Low-carb diets help with weight loss simply because they reduce calories, and that’s what it comes down to.

‘But sometimes a low-carb diet can deplete you and drop the quality of your training, especially HIIT, aerobic training and weight training, if you are not fueled.

‘I like to follow carb cycling. This is two days of low carb (for me, this is 80g), getting calories from mainly fats and protein.

‘The two low-carb days keep you in a calorie deficit and the third day gives you a boost to continue training through the week.

Chris and Jack also believe the key to long term weight-loss success is implementing healthy habits that can be incorporated into people’s daily routines.

Chris said: ‘We start a lot of the clients on a pretty rigorous two week cleanse or detox which eliminates a lot of the bad food and reduces the cravings for sugar and carbs.

‘As we build in the healthy nutritious foods, they start to crave these foods instead of sweets and chocolate.

‘Some people’s habits might be to drink a ton at the pub if they feel down. We are supplementing those habits with healthy ones and get them to a point where they enjoy exercise and it’s their go-to for stress relief.

The duo are also advocates for intermittent fasting to encourage the body to draw on its fat reserves.

Chris said: ‘Intermittent fasting is proving to be really healthy for the body. Most people are having breakfast at 7am and probably having a last meal at 8pm and a snack before bed. That’s a huge eating window.

‘So we want to try and push breakfast back to 9/10am and keep shortening the window – it would be great to limit it to six to eight hours of eating.

‘The reason people put on weight in life is because they are always storing calories and only ever utilizing calories from the foods they have just eaten.

‘We want to get the body to draw calories from its storage during fasting periods.’

This article was originally published by Healthista and reproduced with their permission.

The best way to tell how someone is feeling