Jeremy Hunt today steps up efforts to boost support for a system of ‘presumed consent’ for organ donation after death.

The Health Secretary urged the public to overcome a ‘fatal reluctance’ to discuss the issue and back the idea of having to opt out if they do not want to donate organs.

Mr Hunt has launched a three-month consultation starting today to establish exactly how the new system would work.

It will cover whether children would be exempt and whether relatives should have the power to stop their loved ones’ organs being used.

Proposals to introduce a system of presumed consent for organ donation were first announced by Theresa May at the Tory party conference in October.

The system was adopted by Wales in December 2015 and the Scottish government has pledged to follow suit within four years.

Campaigners say it would save lives and point out that most of the public want to be donors but never get round to signing up.

Opponents, including Christian charities, say presumed consent is ‘unethical’ and suggests that people’s organs are the property of the state.

Last year 457 patients died waiting for an organ transplant. Another 875 were taken off the list because they were too ill to have surgery, and many have since died.

Mr Hunt said: ‘Every day, three people die for want of a transplant, which is why our historic plans to transform the way organ donation works are so important.

‘We want as many people as possible to have their say as we shape the new opt-out process.

‘But as well as changing the law, we also need to change the conversation. It can be a difficult subject to broach, but overcoming this fatal reluctance to talk openly about our wishes is key to saving many more lives in the future.’

Under the current system, those wanting to donate their organs after death can sign up to the NHS Organ Donation Register. But their families can still intervene and stop their organs being used if they are strongly opposed to it. 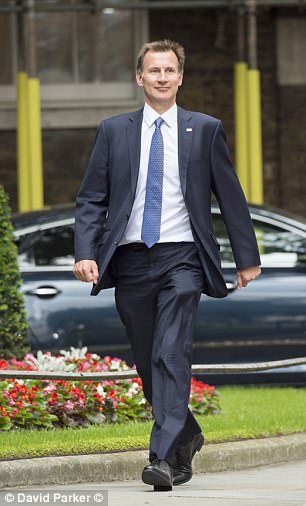 When patients who are not on the register die, doctors can ask relatives if they agree to their organs being donated, but most do not.

Figures from NHS Blood and Transplant, which oversees organ donation, show that 1,100 families said no to loved ones’ organs being used last year.

Some of these patients had signed up to the Organ Donation Register, while others had not, requiring doctors to broach the topic with relatives. Over the next three months the Department of Health is asking the public and medical organisations to offer their views on a system of presumed consent.

They will be asked to address specific issues such as whether the under-18s should be exempt from automatic organ donation after death. This is the case in Wales unless the family requests that organs are used.

The consultation will also establish whether relatives should be able to block a patient’s organs being used even if they had not opted out, as is the case in Wales.

Surveys have shown that around 80 per cent of the public are in favour of donating their organs but only 36 per cent have joined the national register.

Dr John Chisholm, chairman of the British Medical Association’s medical ethics committee, said: ‘Many patients are anxiously awaiting news of whether they will receive a life-saving transplant and we hope this is the first step towards addressing the serious shortage of organs for donation in England.’

Hugh Whittall, director of the Nuffield Council on Bioethics, a charity that examines ethical issues in medical research, said: ‘We are concerned that the Government consultation goes straight into asking how an opt-out system should be introduced, rather than if it should.

‘The Government should not be making this change until there is evidence it works, and until we are confident it won’t undermine trust in the system in the long term.’

Newcastle mother-of-three was nearly killed by her SPOT