Even people who have never suffered an asthma attack before can be struck down during a storm, scientists have discovered.

They found hospital admissions for asthma attacks increase up to ten-fold during big storms – with half of the patients not previously known to be asthmatics.

Professor Isabella Annesi-Maesano, from the Pierre Louis Institute of Epidemiology and Public Health in Paris, believes ‘thunderstorm asthma’ is caused when pollen is broken up into tiny microscopic particles by the electrical charge of a storm.

This means they are inhaled far deeper into the lungs than normal pollen – triggering asthma attacks in people who have never had problems before.

The academic, presenting her findings at the British Thoracic Society winter conference, said during a storm dry uplifts of air draw whole pollen particles into the high humidity at the cloud base.

The particles are then ruptured by electricity in the storm, and then cold downdrafts force the smaller pollen fragments to ground level where they are spread.

‘This can be very dangerous for people with pollen nasal allergy that have never experienced asthma attacks and don’t know how to manage them,’ she said.

‘During the first 20 to 30 minutes of a thunderstorm, people with pollen nasal allergies may inhale a high concentration of the pollen fragments dispersed into the atmosphere, which in turn by penetrating the airways can induce asthmatic reactions, often severe.’

Professor Annesi-Maesano, whose findings are published in the Journal of Allergy and Clinical Immunology, cited several examples of storms in which hospital admissions for asthma attacks soared.

In November 2016 during a major storm in Melbourne, Australia, 8,500 people were taken to A&E after asthma attacks, nine of whom died.

In 2002 a smaller storm in Cambridge saw 26 people with unexpected asthma attacks go to hospital. 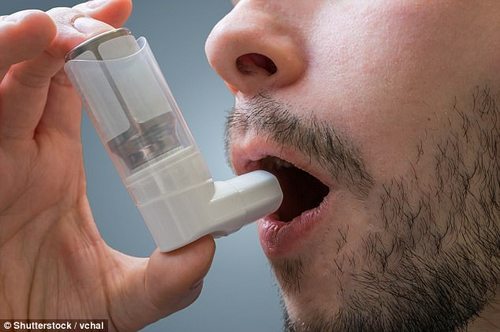 And in June 1994 some 640 people with asthma arrived at hospitals in London in the 30 hours after a thunderstorm – up from an expected number of 60.

Professor Annesi-Maesano said the link was only seen during the spring and summer when pollen levels are at their peak.

But she said climate change is likely to make the problem worse, increasing the frequency of thunder storms.

Dr Samantha Walker, director of research and policy at Asthma UK, said: ‘Asthma is a devastating condition that affects 5.4 million people in the UK.

‘We have seen the effect that thunderstorms can have for people with asthma – just last year several people in Melbourne died as a result of their asthma being aggravated by thunderstorms.

‘Humid, stormy conditions break pollen into much smaller particles, which are then inhaled more deeply into the lungs and can lead to life-threatening asthma attacks.

‘People with asthma who struggle with pollen should try to stay indoors with the windows closed during thunderstorms.

‘It’s important that people with asthma take their medicines as prescribed and carry their reliever inhaler with them at all times.’

Why are we addicted to salted caramel