If only Americans would slow down, turn off screens and get some sleep, rates of the deadliest diseases could drop drastically, he claims.

About 40 percent of Americans get less than the CDC’s recommended seven hours of nightly sleep.

Health fads come and go, and the last year has seen more than its share of sleep studies, but Dr Walker is adamant that rest must go the way of exercise and become not just a trend but a national priority, in order to improve the length and quality of life in America.

‘We live in a dark-deprived society’: Sleep scientist Dr Matthew Walker says that LED screens are keeping us from getting a good night’s sleep, increasing our risks for nearly all diseases

The first step is to stop stigmatizing sleep

‘Why would you ever take for granted her best health care plan?’

This is, perhaps, the best way to describe why humans – and all animals – need sleep.

Though we don’t know what, exactly, is so restorative about sleep, we do know how the body behaves differently during sleep and wakefulness. We also know what crucial biological processes start to break down without rest.

And yet, he says that American attitudes – and particularly those of medical professionals – are against our best ‘contra-death.’

‘I have never seen a public health campaign about sleep. I’ve never walked into a hospital where there was an informational poster on the wall…when’s the last time your doctor prescribed you a good night’s sleep?’

Furthermore, he claims that little is taught about sleep in the medical curriculum.

‘If you think about a medical residency program, it’s a badge of honor, being one of these people who can survive an onslaught of sleep-deprivation, so why would the medical profession promote it?’

Sleep starts getting sidelined when we are children he says, blaming early start times for children’s struggle to focus.

‘We need to start educating children about sleep, but education is at fault with this incessant model of early start times,’ Dr Walker said.

In fact, research published in the last year backs up his concern, showing that children who have to start school before 8:30 am are more likely to be depressed.

Recent research has also more broadly linked sleeplessness to depression, and cell phone use to sleeplessness, especially for children and teens.

1. Give yourself a non-negotiable eight hour sleep opportunity

Without giving your brain and your body the chance to actually get all of the sleep that it needs, probably none of these other tips are going to transact as efficacious a benefit as they could do.

You should go to bed at the same time and wake up at the same time. Try to never deviate. If you do, you’re not going to feel sleepy at the appropriate time because you haven’t built up enough of that healthy sleep pressure. Then, you go to bed even later, and start to drift dangerously forward in time. We see this on the weekend, then it all comes crashing down on Sunday night, of course. We call this ‘social jet lag.’

Keep it cool. Keep the bedroom at about 18.5C (65.3F). Your brain and body need to drop their core temperature by about one degree Celsius to initiate good sleep, and that’s the reason that it’s always easier to fall asleep in a room that’s too cold than too hot. The cold room is at least taking your brain and your body in the right temperature direction for sleep.

We are a dark-deprived society in modern times. We need darkness in the evening specifically, to allow for the rise of a hormone called melatonin, which helps time the natural and normal, healthy onset of our sleep. If we’re exposed to too much light in our environment – especially the harmful light that comes from LED screens, such as iPads and tablets and computer screens, they will essentially put the brakes on your brain, fooling it into thinking that it’s day time, even when it’s nine or 10 in the evening. So, no wonder you don’t feel sleepy at the right time.

If you can’t fall asleep for 20 minutes, or you’ve waken in the middle of the night and can’t get back to sleep, go to a different room. There, you can have a dim light and a book to read; no emails, no screens, and try not to eat. If you stay awake in bed, your brain quickly learns the association of your bed being a place of wakefulness, rather than a place of sleep. Only return when you are actually sleepy and, that way, your brain can re-learn an association about your bed and your bedroom as a place of sleep.

Caffeine in the brain will keep you from going into deepest stages of sleep, even if you are able to fall asleep. Many people use alcohol to help them get to sleep, and it is a myth. Alcohol is a sedative, but sedation is not sleep. Alcohol knocks out your cortex, but you will wake up throughout the night and feel unrestored by your sleep. Alcohol will also block your dream sleep, which is critical for for many parts of health, especially mental and emotional health.

Dr Walker says that ‘we are a dark-deprived society,’ staring into screens late at night, and ‘then infusing the damaging effects of caffeine and alcohol’ into the mix.

He says that sleeplessness is a ‘societal’ problem that needs to be addressed at every level.

‘Those who feel they can’t sleep, I have deep sympathy for them.

‘Society needs to stop stigmatizing sleep with this label of laziness, I don’t think the dangers of sleep deprivation are being fundamentally communicated to the public,’ he says.

Sleep boosts the immune system and short nights may be carcinogenic

Sleepless people are about four percent more likely to develop cancer than others, according to the CDC – a fairly modest increase, compared to the links between short nights and other diseases.

Yet, the World Health Organization has classified night shift work as a probable carcinogen.

Both melatonin and lymphocytes – aptly nicknamed ‘natural killer cells’ – help to fight cancer cells in the body, and the protectors are produced while we sleep.

‘When we get four to five hours of sleep, we see a 70 percent drop in natural killer cells,’ says Dr Walker.

‘At night, the sewage system of the brain kicks in,’ and shortchanging ourselves on sleep can undercut our immune systems, he explains.

Sleep can protect your heart, your pancreas and your waist line in ways your workout won’t

Activity in ‘brain regions that control hedonic desires are actually increased by the lack of sleep,’ says Dr Walker.

When you’re overly -tired ‘your brain goes into this hedonic overdrive and selects bad foods that are high in sugar and heavy-hitting, stodgy carbs.’

In a one-two punch, lack of sleep breaks down the same biological systems that would break down those bad, high-glucose foods.

Beta cells in the pancreas store and release insulin, which is crucial to regulating blood-glucose levels. But sleeplessness has been linked to failures of this system and spikes in blood glucose.

This basically ‘puts you on the path to diabetes 2,’ he says, and can lead to high blood pressure, and in turn, a greater risk of heart disease.

Sleeping and dreaming keep our minds and memories young and happy

He and his team found that the two kinds of brain waves that produce deep sleep get out of sync in older adults. This can happen in younger people too, and for either, it interrupts the memory consolidation process, and clearly impairs their ability to form long term memories.

Rapid eye movement (REM) sleep plays an important role in the movement of short term memories – stored in the hippocampus – to the cerebral cortex, where they become long term ones.

Dr Rubin Naiman, a psychologist and dream specialist, says that the dreaming that happens during this time is crucial to our mental health.

‘If you don’t finish the dreaming process, it’s like not finishing digestion,’ he says. When we cut a dream short, ‘we have not finished incorporating what the psyche is trying to make a part of us.’

He says that the value of dreaming has been ‘subsumed’ by the value of sleep by the medical profession, but Dr Walker says they have both been woefully neglected. 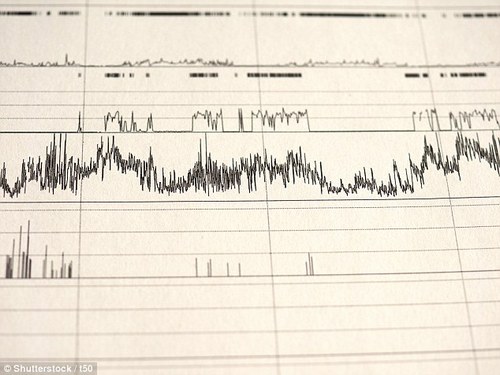 During REM sleep, two parts of the brain generate coordinating sleep waves to produce dreams. These can be measured and recorded by an electrocardiogram (file image)

Lepicol nutritionist reveals how to ditch sugar in 7 days