The producer helped Jennifer Lawrence win an Oscar with Silver Linings Playbook and gave Clooney his first break on the big screen in From Dusk Till Dawn and as a director in Confessions of a Dangerous Mind.

But the A-listers turned on Weinstein – a man once revered as God by some of the world’s best actors – after he was fired from his own production company over dozens of sexual harassment allegations.

In an interview last night, the actor broke his silence and called Weinstein’s behavior ‘indefensible’, adding that ‘the reality is that this is a problem deeply ingrained in our society’. 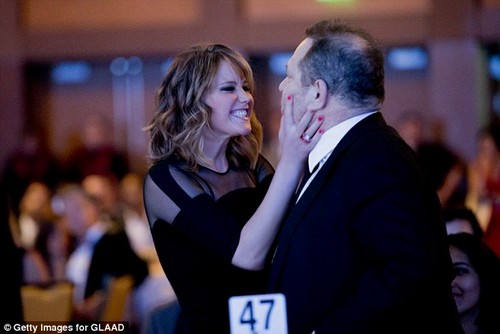 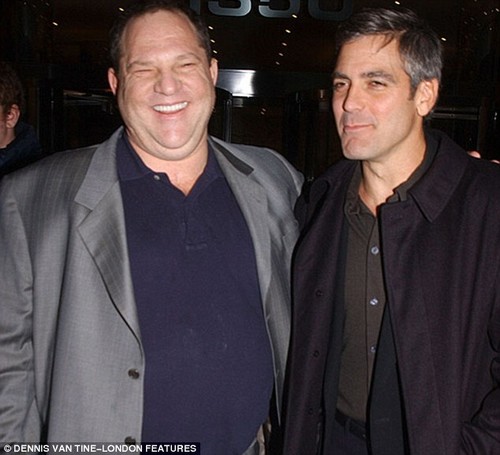 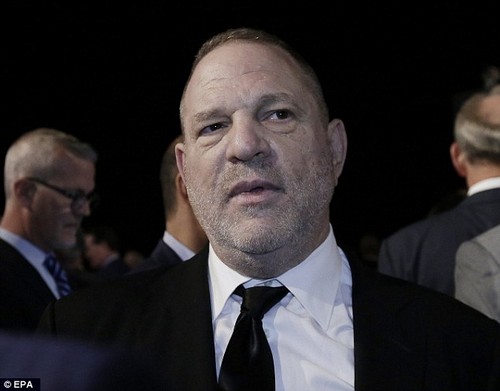 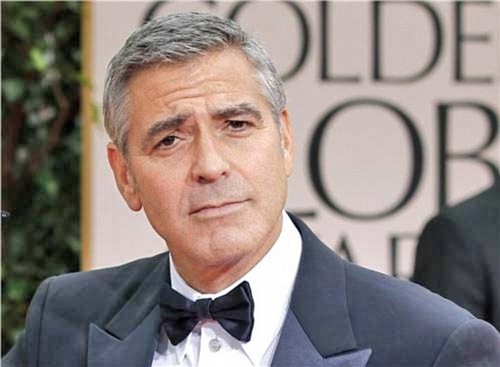 In an interview last night, Clooney broke his silence and called Weinstein’s behavior ‘indefensible’, adding that ‘the reality is that this is a problem deeply ingrained in our society’

Clooney told the Daily Beast: ‘“It’s indefensible. That’s the only word you can start with.

‘Harvey’s admitted to it, and it’s indefensible. I’ve known Harvey for 20 years.

‘We’ve had dinners, we’ve been on location together, we’ve had arguments. But I can tell you that I’ve never seen any of this behavior-ever.’

Jennifer Lawrence has echoed the sentiments, stating although she had not witnessed Weinstein’s inappropriate acts herself, she still condemned the producer. 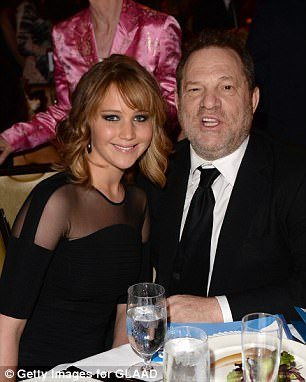 Jennifer Lawrence and Harvey Weinstein attend an awards ceremony in 2013

She told Variety: ‘I was deeply disturbed to hear the news about Harvey Weinstein’s behavior. This kind of abuse is inexcusable and absolutely upsetting.’

Kate Winslet, who won an Oscar for The Weinstein Co’s The Reader said in a statement that the alleged behavior is ‘without question disgraceful and appalling’.

‘I had hoped that these kind of stories were just made up rumors, maybe we have all been naïve,’ Winslet wrote.

Movie legends Meryl Streep and Judi Dench led a chorus of outrage Monday following the revelation that Harvey Weinstein had sexually harassed women for decades, as Hollywood stood accused of covering up a pattern of misconduct that finally cost the film mogul his job.

Many had been waiting for Streep to comment given her past praise of Weinstein, who she referred to as ‘God’ at the 2012 Golden Globes while accepting her Best Actress award for playing Margaret Thatcher in ‘The Iron Lady.’

Streep revealed in her statement however that she had no idea about the incidents of sexual harassment described by woman in the Times piece.

‘The disgraceful news about Harvey Weinstein has appalled those of us whose work he championed, and those whose good and worthy causes he supported,’ said Streep.

‘The intrepid women who raised their voices to expose this abuse are our heroes.

‘Harvey suppo
rted the work fiercely, was exasperating but respectful with me in our working relationship, and with many others with whom he worked professionally. 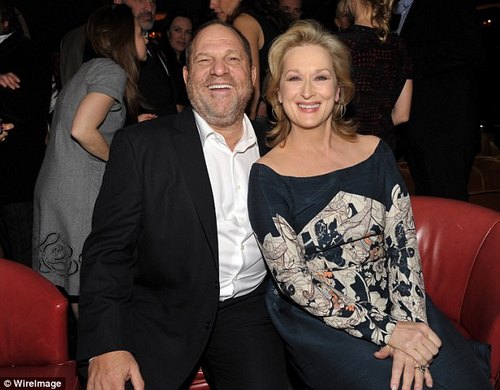 Speaking out: Meryl Streep has released a lengthy statement four days after a bombshell report detailed Harvey Weinstein’s decades of sexual harassment (pair above in 2012)

She continued: ‘And If everybody knew, I don’t believe that all the investigative reporters in the entertainment and the hard news media would have neglected for decades to write about it.’

Streep closed out by one again denouncing Weinstein’s actions and applauding the women who spoke.

‘The behavior is inexcusable, but the abuse of power familiar,’ said Streep.

‘Each brave voice that is raised, heard and credited by our watchdog media will ultimately change the game.’ 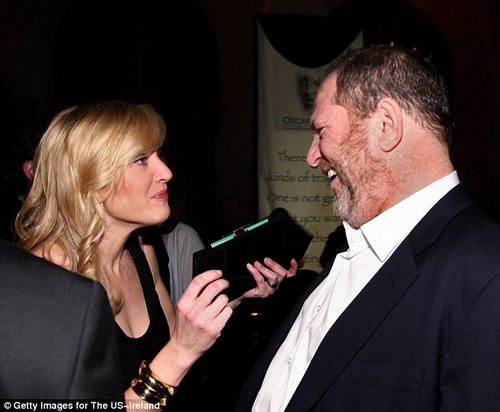 Rumblings: Winslet (above in 2009 with Weinstein) chimed in Monday evening admitting that she had been aware of the rumors throughout the years but did not believe them 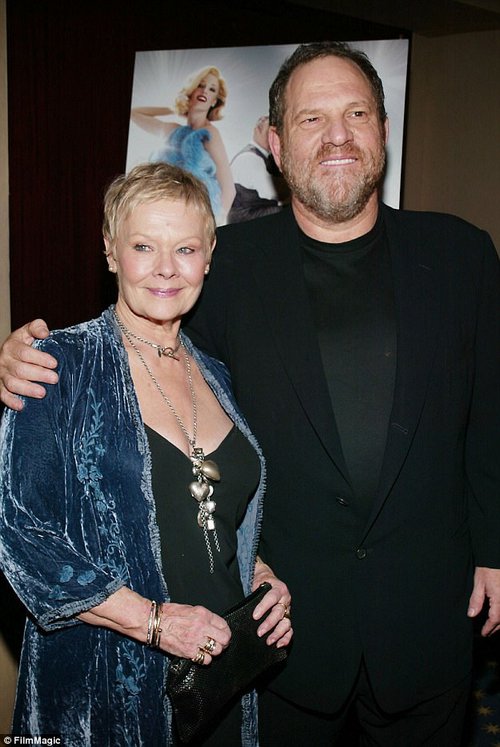 Unaware: Judi Dench (above in 2005 with Weinstein) whose film career was launched by Weinstein, said that she too was unaware of this harassment and that her thoughts were with the victims

Glenn Close, who has worked with Weinstein a number of times in the past, most notably in the 2005 animated film ‘Hoodwinked’ and its sequel, also slammed the shamed producer.

She said: ‘I’m sitting here, deeply upset, acknowledging to myself that, yes, for many years, I have been aware of the vague rumors that Harvey Weinstein had a pattern of behaving inappropriately around women,’ said Close in a statement to The New York Times.

‘Harvey has always been decent to me, but now that the rumors are being substantiated, I feel angry and darkly sad.

‘I’m angry, not just at him and the conspiracy of silence around his actions, but also that the “casting couch” phenomenon, so to speak, is still a reality in our business and in the world: the horrible pressure, the awful expectation put on a woman when a powerful, egotistical, entitled bully expects sexual favors in exchange for a job,’ said Close.

‘Ours is an industry in which very few actors are indispensable and women are cast in far fewer roles than men, so the stakes are higher for women and make them more vulnerable to the manipulations of a predator.’

Weinstein was fired late Sunday from his own film studio, three days after a bombshell New York Times report alleged that the Oscar-winning producer behind such hits as The King’s Speech and The Artist had preyed on young women hoping to break into the film industry.

Weinstein’s accusers – who reportedly include celebrities such as Rose McGowan and Ashley Judd – say the 65-year-old tycoon had promised to help advance their careers in exchange for sexual favors, pressuring them to massage him and watch him naked.

The Weinstein Company’s board said it had sacked him ‘in light of new information about misconduct’ in the explosive Times article, which detailed decades of legal settlements stemming from harassment allegations. 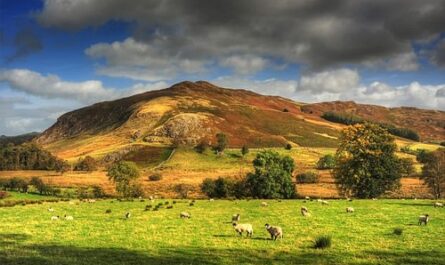