The heroic first responders to the Mandalay massacre gunman have described their 12 minutes of hell as they battled to storm the Vegas sniper’s nest.

Stephen Paddock, 64, killed 58 people in Las Vegas last weekend as he rained gunfire onto more than 20,000 people at the Route 91 Harvest Music Festival from his hotel room on the 32nd floor.

And now in an interview with ’60 Minutes,’ the officers who first stormed the room have given new details about how Paddock turned his suite into a fortress using power tools.

The first responders, who all happened to be nearby when they heard about the shooting, also revealed how they banded together to form an ad-hoc, improvised SWAT team in an effort to stop the shooter from claiming any more victims.

Members of the law enforcement team who were the first to enter Stephen Paddock’s hotel room after he opened fire on a crowd in Las Vegas (Pictured: Officers Casey Clarkson (L) and Matthew Donaldson on the top row. Bottom row are officers Dave Newton (L) and Sgt. Joshua Bitkso – October 2017) 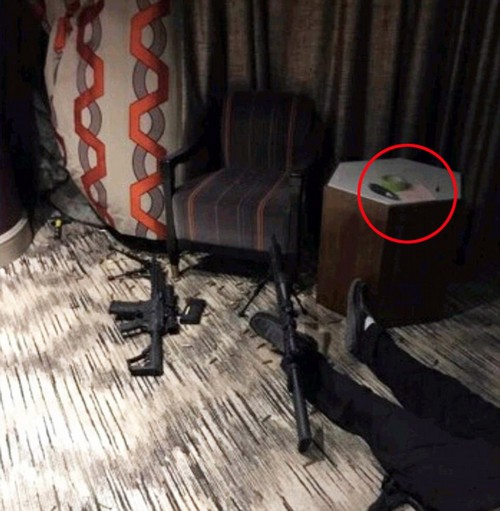 Stephen Paddock, 64, killed 58 people in Las Vegas last weekend as he rained gunfire onto more than 20,000 people at the Route 91 Harvest Music Festival – circled in red is one of the notes that the shooter wrote – one of which is believed to be calculations to improve the accuracy of his firing from the 32nd floor of the Mandalay Bay hotel 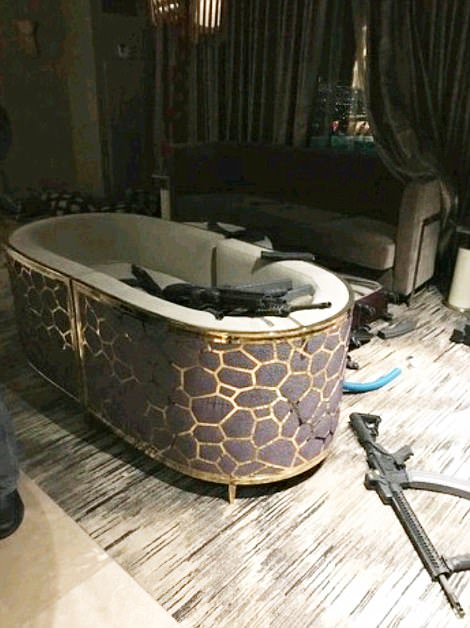 When officers forced their way into the room (pictured) they found guns, ammunition and power tools littering the floor of the suite 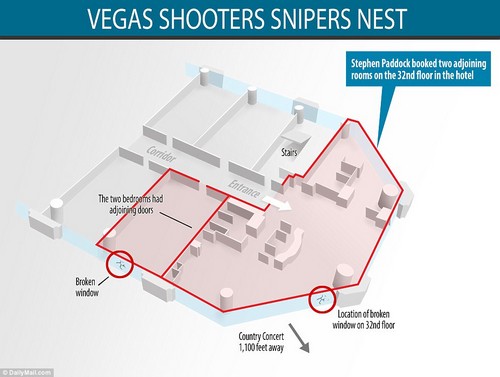 Sergeant Joshua Bitsko and Officer Dave Newton from the Las Vegas Police Department’s K9-unit, who rushed to the scene after hearing about the attack on their police radio while they were training dogs, revealed that Paddock had barricaded the stairwell door outside his suite with a ‘piece of metal.’

When they gained entry to the room and found Paddock dead, the officers discovered tool boxes filled with power tools that he was using ‘to run wires for his surveillance systems.’

The K-9 officers and the SWAT team member were also joined by Detective Matthew Donaldson and formed an ad-hoc SWAT team of their own to tackle the nightmare shooting attack.

In the heat of the moment, Donaldson even got rid of his cowboy boots and ran to the scene barefoot. 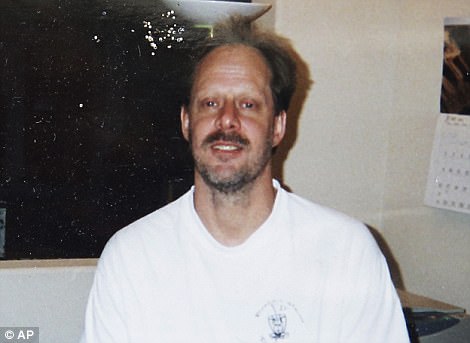 ‘I took my boots off. I just threw ’em in the casino. That was slowing me down. I was faster barefoot and I was gonna be more effective barefoot,’ he said.

Earlier, the officers discussed the detailed notes they discovered left by Paddock.

The note was first discovered by Officer Newton lying face-up on Paddock’s nightstand.

‘I could see on it he had written the distance, the elevation he was on, the drop of what his bullet was gonna be for the crowd,’ Newton said. ‘So he had that written down and figured out so he would know where to shoot to hit his targets fromthere.’

The room looked down on the crowd across the street and was an estimated 1,100 feet away, according to Las Vegas officials.

Newton said it was very ‘eerie’ to enter the room and find the lifeless body of a man who had just minutes before unleashed a rain of carnage upon hundreds of innocent people.

Authorities also revealed on Saturday that Paddock may have driven to the Nevada desert to prepare for Sunday’s attack. 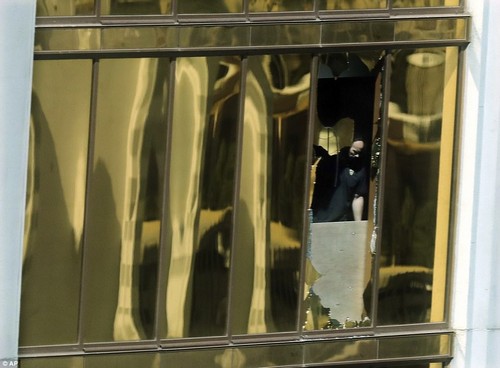 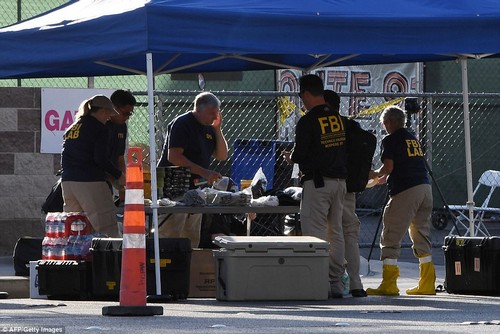 Investigators work at a festival grounds across the street from the Mandalay Bay Resort and Casino on Tuesday authorities began cleaning up the area where the shooting occurred, clearing away the personal belongings of thousands of concert goers

Investigators said that they have found surveillance footage showing Paddock driving towards a secluded area on the outskirts of Mesquite, Nevada where locals are known to practice shooting.

Paddock was a resident of Mesquite, about a 90 minute drive to Las Vegas, and split much of his time between there and Las Vegas hotel rooms.

Records show that Paddock began stocking an arsenal of weapons in 2016, buying 33 of his 47 guns since last October, including AR-15-style rifles, according to the Wall Street Journal.

More than a dozen high-powered assault weapons were found in Paddock’s room following Sunday’s massacre, including guns modified with ‘bump stocks’, an alteration that allows guns to fire bullets at a faster rate.

Meanwhile, authorities began cleaning up the area where the shooting occurred, clearing away the personal belongings of thousands of concert goers lucky enough to have escaped with their lives. 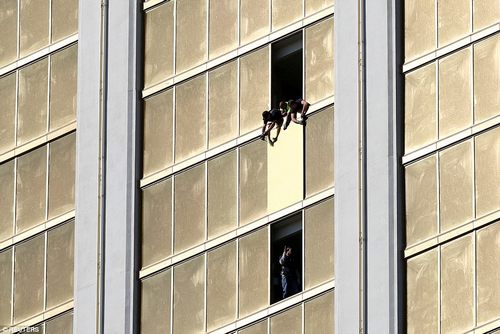 Workers board up a broken window at the Mandalay Bay hotel, where shooter Stephen Paddock conducted his mass shooting along the Las Vegas Strip 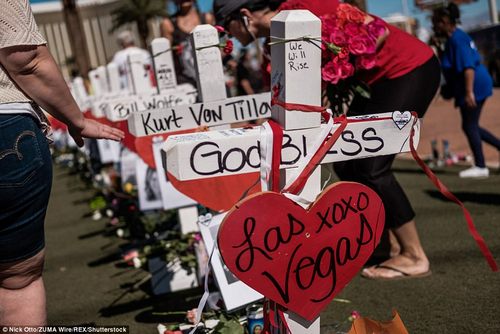 FBI agents could be seen piling backpacks, baby strollers and lawn chairs left on the Sunset Strip throughout the week, according to CBS News.

Investigators said they will try to return everything left behind to their rightful owners over the next few weeks.

Vice President Mike Pence was also in Las Vegas Saturday, there to attend a ceremony honoring the victims killed or wounded in the attack.

Vice President Mike Pence speaks at the culmination of a faith unity walk, held to help the community heal after Sunday’s mass shooting, at Las Vegas City Hall on October 7, 2017

‘On Sunday night, Las Vegas came face to face with pure evil,’ Pence said at the Las Vegas City Wide Unity Prayer Walk. ‘But no evil, no act of violence will ever diminish the strength and goodness of the American people.’

‘It was a tragedy of unimaginable proportions,’ Pence added.

Federal and local law enforcement officials are still stumped as to Paddock’s motive for the heinous shooting spree, with Clark County Undersheriff Kevin McMahill saying investigators have ‘looked at literally everything’ and still have come up empty.

Saturday Night Live ditched its traditional comedic cold open on Saturday in favor of a solemn tribute by country music star Jason Aldean to both the victims of last Sunday night’s massacre in Las Vegas as well as late rocker Tom Petty.

Aldean was invited onto SNL where he paid homage to the victims before playing a rendition of I Won’t Back Down, the 1989 hit single by Petty.

Petty died this week from cardiac arrest. He was 66 years old.

‘This week we witnessed one of the worst tragedies in American history,’ Aldean said.

‘Like everyone, I’m struggling to understand what happened that night and how to pick up the pieces and start to heal.

Aldean was invited onto SNL where he paid homage to the victims before playing a rendition of I Won’t Back Down, the 1989 hit single by Petty

‘So many people are hurting. There are children, parents, brothers, sisters, friends. They’re all part of our family.

‘So I want to say to them: We hurt for you. We hurt with you. But you can be sure that we’re gonna walk through these tough times together every step of the way.

‘Because when America is at its best, our bond and our spirit – it’s unbreakable.’

Aldean and his band then began their cover version of Petty’s hit.

Aldean was in the middle of performing on stage at the Route 91 Harvest Festival in Las Vegas last Sunday night when Paddock opened fire.