Dame Judi Dench has hit out at movie mogul Harvey Weinstein for sexually harassing Hollywood actresses – despite being so friendly with him she once got a fake tattoo of ‘JD loves HW’ on her bottom.

Weinstein, 65, a long time champion of Dench’s career, has been fired from his own company after being accused of a spate of sexual harassment claims spanning two decades.

Now the award winning actress, 82, has said she is horrified by the claims and in a statement offered her sympathies to those who have suffered. 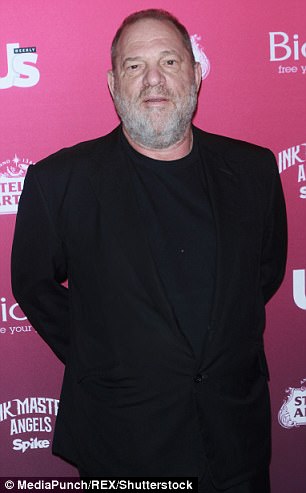 She told Newsweek: ‘Whilst there is no doubt that Harvey Weinstein has helped and championed my film career for the past 20 years, I was completely unaware of these offences which are, of course, horrifying, and I offer my sympathy to those who have suffered, and wholehearted support to those who have spoken out.’

Weinstein and Dench have been long time associates and in 2014 the James Bond actress revealed she once jokingly had his name temporary tattooed on her bottom.

She made the cheeky news public during her appearance at the 2014 BAFTA Los Angeles Awards.

At the ceremony the star revealed a famous person told her early on in her career that she could never make it in films because her face ‘just isn’t properly arranged’.

However, when she was cast as Queen Victoria in the 1997 TV movie Mrs Brown, she was able to finally prove the unnamed source of those harsh words wrong.

‘Harvey Weinstein, whose tattoo I still have on my bum, said it would be a proper (theatrical) film, and it was,’ she told the audience, thanking him for his support. 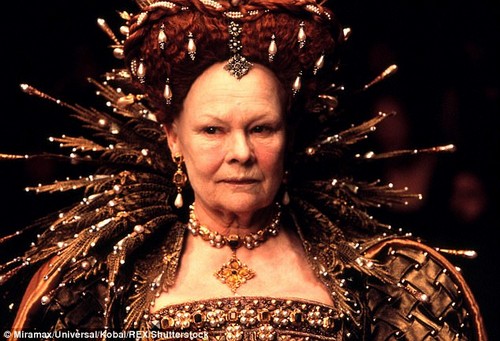 The pair have had a strong collaborative relationship since his former studio, Miramax, distributed the TV movie Mrs Brown in which she received her first Oscar nomination (pictured in Shakespeare in Love, 1998)

Dench confirmed the joke on the Graham Norton Show in 2013, telling the host she had the words ‘JD loves HW’ temporary inked on to her bottom in tribute to her friend.

The pair have had a strong collaborative relationship since his former studio, Miramax, distributed the film in which she received her first Oscar nomination.

While she won the Best Supporting Actress award for her role in the 1998 film Shakespeare in Love.

Their most recent collaborations include Philomena in 2013 as well as the delayed Tulip Fever. 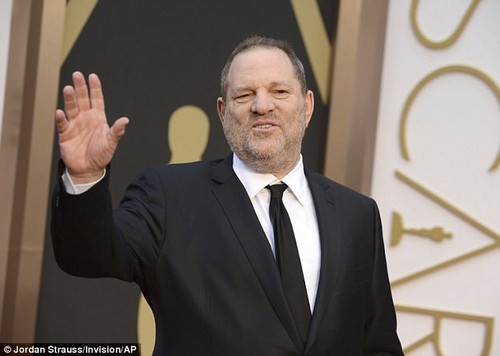 Weinstein is seen here arriving at the Oscars in Los Angeles in 2014. He has been involved in the production or distribution of movies such as Shakespeare in Love and Pulp Fiction

The production boss was ousted from The Weinstein Company – which he founded with his brother Bob in 2005 – by its board of directors on Sunday.

The firing comes after a bombshell report alleged Weinstein, whose company produced such hits as ‘The King’s Speech’ and ‘The Artist,’ preyed on young women hoping to break into the film industry.

The accusers – including celebrities such as Rose McGowan and Ashley Judd – say Weinstein promised to help advance their careers in exchange for sexual favors, pressuring them to massage him and watch him naked.

Fired: Harvey Weinstein has been ousted from the company he founded in 2005 after stories emerged of multiple alleged sexual harassment claims going back decades

Until this week, Weinstein had been one of the most imposing – and seemingly untouchable – figures in the movie industry.

But while stories about Weinstein have largely only circulated in media and Hollywood circles for decades, the lid is now off – thanks to an explosive report in the New York Times on Thursday that uncovered a string of sexual harassment allegations and cover-ups.

As news of his firing started to emerge on Sunday, Hollywood figures came forward to applaud the decision.

Ashley Judd thanked Hollywood stars including Heather Graham and Susan Sarandon who had backed her on Twitter and McGowan tweeted that the team that produced the NYT article had ‘saved lives’ with their ‘bravery’.

Ashley Judd: Judd’s film roles include the thriller Kiss the Girls – and says that during the filming of that movie Weinstein repeatedly asked her to watch him shower. She was one of the women who spoke out to The New York Times this week, saying: ‘Women have been talking about Harvey amongst ourselves for a long time, and it’s simply beyond time to have the conversation publicly.’

Zelda Perkins was 25 when, as an assistant of Weinstein’s in London, she reportedly confronted the mogul for harassing her and ‘several’ other women; she later settled out of court

Elizabeth Karlsen, an Oscar-winning producer, said a female executive told her almost 30 years ago that she had found Weinstein naked in her bedroom in a Miramax-rented property

Lauren Sivan: The former Fox news host said that Weinstein trapped her in a closed restaurant and masturbated in front of her to completion in 2007. He took her to a closed restaurant beneath a club she had visited and attempted to kiss her, then when she refused he cornered her and made her watch him touch himsel
f, according to The Huffington Post.