A man is under arrest in the case of a four-year-old girl German police discovered being abused on the ‘dark net’.

He was turned in by the girl’s mother and grandparents after German authorities took the unusual step of going public with images of the young victim on Monday in a bid to identify her.

Before midnight the same day both the girl and alleged abuser had been identified and a man is now in custody after being arrested in Lower Saxony. Authorities are set to release more information about the case during the course of the day.

National investigators from the Federal Criminal Police Office (BKA) joined a cyber crime unit in searching for the child (pictured), who is between four and five years old

The photos of the female victim were released with an appeal for information about who she is. Police said she was subjected to ‘serious sexual abuse’ between October last year and July this year.

Vile pictures of her suffering were uploaded to the dark net by her tormentor – images said to have sickened hardened lawmen.

Chief prosecutor Georg Ungefuk from the Central Office for Combating Cyber Crime said of the suspect: ‘He is a German citizen. The man is being questioned. The girl is also German and four years old. 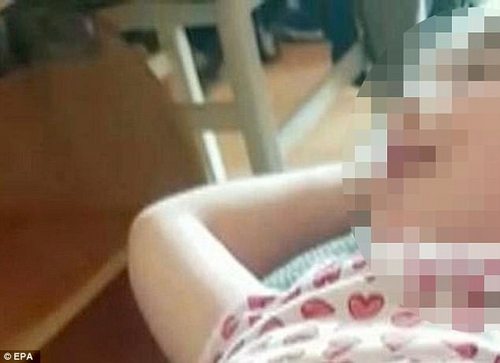 Because they have exhausted all leads, police released her images in a desperate attempt to find her

‘He was arrested in an apartment by state police.’

According to the Bild newspaper the arrest took place in Lower Saxony.

Ungefuk took the decision to release the images of the girl on a Monday stating: ‘This is the last measure to identify the perpetrator. We only fell back on this as all other possibilities have not led to finding out who she is.

‘We assume that the child is further exposed to the perpetrator’s access,’ Ungefuk added. She is now in the care of child psychiatrists.

It is unclear whether the victim is the daughter of the suspect.