The Harvey Weinstein sexual harassment and assault scandal has heated up over the past 24 hours, with multiple stars speaking out against the executive and the directors of his company announcing that he has been terminated from his post.

That news took many by surprise, but not Weinstein it seems based on a desperate email he fired off just before he was fired on Sunday.

‘My board is thinking of firing me. All I’m asking is, let me take a leave of absence and get into heavy therapy and counseling,’ wrote Weinstein in the email, which was read by one of the recipients to Janice Min.

‘Whether is be in a facility or somewhere else, allow me to resurrect myself with a second chance.’

He went on to state that ‘a lot of the allegations are false’ before asking that the men and women he contacted send an email to his personal account backing him, which he could in turn present to the Weinstein Company board.

That was followed by a tweet stating: ‘One big player who refused to respond positively to Weinstein’s email plea tells me he replied in essence: “no f-ing chance.”‘

Reaching out: Harvey Weinstein fired off an email to other CEOs (oncluding Ron Meyer above in 2013 with Weinstein) and movie moguls on Sunday, just before he was fired by the Weinstein Company board of directors 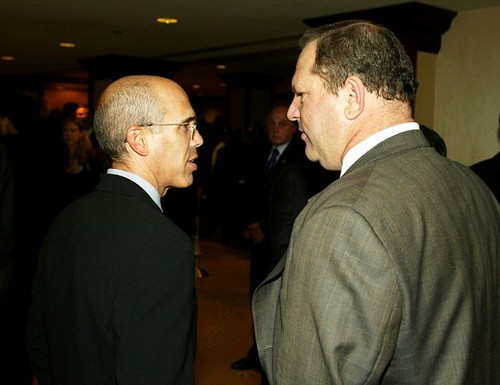 ‘I need you to send a letter to my private gmail address,’ wrote Weinstein.

‘The letter would only go to the board and no one else.’

He continued: ‘We believe that what the board is trying to do is not only wrong but might be illegal and would destroy the company.

‘If you could write this letter backing me, getting me the help and time away I need, and also stating your opposition to the board firing me, it would help me a lot.’

The letters, if any were sent, did little good in the end, with the board of directors at Weinstein Company announcing on Sunday that they were terminating their founder in the wake of what they claimed were newly discovered allegations.

‘My board is thinking of firing me. All I’m asking, is let me take a leave of absence and get into heavy therapy and counseling. Whether it be in a facility or somewhere else, allow me to resurrect myself with a second chance. A lot of the allegations are false as you know but given therapy and counseling as other people have done, I think I’d be able to get there.

‘I could really use your support or just your honesty if you can’t support me.

‘But if you can, I need you to send a letter to my private gmail address. The letter would only go to the board and no one else. We believe what the board is trying to do is not only wrong but might be illegal and would destroy the company.

‘If you could write this letter backing me, getting me the help and time away I need, and also stating your opposition to the board firing me, it would help me a lot. I am desperate for your help. Just give me the time to have therapy. Do not let me be fired. If the industry supports me, that is all I need.’

It was a sudden move for the board, who on Friday said that Weinstein had taken an indefinite leave of absence.

Questions remain however about how the board was so in the dark given the number of settlements that have been paid out, with the first going back to an incident that happened in 1991 according to the Times.

Weinstein responded in a statement by saying that he was getting help, but then shortly after threatened to sue the paper for $50 million.

Board member Lance Maerov spoke to the The New York Times after the decision to terminate Weinstein on Sunday and that said that the executive had also violated the company’s code of conduct in the past week.

He did not offer any additional details.

Maerov also revealed that there was much concern after Weinstein and his attorney Lisa Bloom met with the board on Thursday night, during which time the layer told the group that they could expect ‘more and different reporting’ that included ‘photos of several of the accusers in very friendly poses with Harvey after his alleged misconduct.’

That same night a handout photo of Weinstein and a smiling Judd appeared in the New York Post alongside a statement from the Oscar-winning producer.

‘This is not the time for Harvey or TWC to appear defiant or indignant,’ wrote Maerov in an email to Bloom.

‘It is time to repair, heal, accept responsibility and recover.’

He also wrote that Bloom had a potential conflict of interest given that Weinstein had agreed to develop a book she wrote into a series.

In another email to Bloom, Harvey’s brother and partner Bob wrote: ‘Perhaps, Harvey as he stated in the NY Times, to the world, should get professional help for a problem that really exists.’ 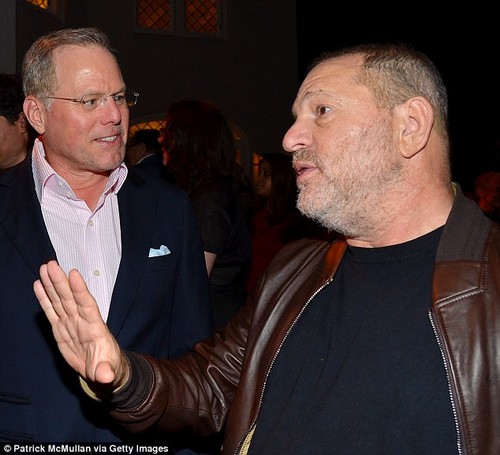 No go: ‘One big player who refused to respond positively to Weinstein’s email plea tells me he replied in essence: “no f-ing chance,”‘ added Min (Weinstein and David Zaslav above in 2016)

Victims: Ashley Judd (left in 1997) and Rose McGowan (right) were revealed to be two of Weinstein’s alleged victims by the Times

On Friday, one-third of the nine-man board resigned in protest, 24-hours after the sexual harassment report threw the firm into chaos.

The company also stated that they were launching an internal probe into the claims against their disgraced co-founder.

Lauren Sivan, formerly a Fox News Reporter, claims that when she worked with the cable channel Long Island 12 a decade ago, Weinstein insisted she take a tour with him in Socialista, a club he part-owned.

She claims he took her downstairs to a kitchen and cleared it of staff and then tried to kiss her. When she refused his advance he said, ‘Well, can you just stand there and shut up’.

The movie mogul is then alleged to have masturbated in front of her and ejaculated into a nearby flower pot.

Sivan says she was trapped and intimidated and deeply shocked.

That same night McGowan first asked why there was so much silence from the Hollywood community, stating: ‘Ladies of Hollywood, your silence is deafening.’

Given the number of lawsuits that the company has settled over the years there is of course a chance that some of these women cannot speak because they signed a NDA or do not want to speak on account of their own personal experiences.

That would not however stop any of these women from publicly declaring that they support and believe McGowan and Judd.

The most encouraging tweet from a member of the Hollywood community came from ‘Girls’ producer Jenni Konner, who said on Thursday: ‘Who are the agents/managers that sent their clients to meet with him when this was a well known “secret”? Them nxt.’ 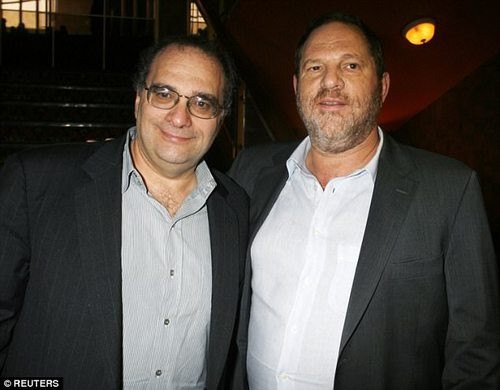 There is rampant speculation among ‘insiders’ that Bob Weinstein (left) leaked details that led to the explosive New York Times story about his brother Harvey’s (right) alleged sexual harassment of a number of women. The brothers are seen above in 2007

Georgina Chapman was seen leaving her Manhattan home on Friday morning, marking the first time she has been seen in public since her husband’s decades of sexual harassment were revealed on Thursday.

The Marchesa designer appeared morose but did manage to flash a smirk as she made her way out of the $15million townhouse she shares with Harvey Weinstein an hour after her husband headed off to work.

Weinstein exited the home on Friday carrying some papers under his arm and flashing a big smile as he made his way to the waiting SUV outside, with his trip to the office coming less than 24 hours after he informed the Times that he was taking a leave of absence.

The embattled Hollywood heavyweight appeared surprisingly upbeat and chipper, especially given the fact that his board will be voting on Friday afternoon on whether or not to cut all ties to the founder and namesake of the company.

He is also facing new allegations of improper conduct, with British actress Jessica Hynes taking to Twitter on Friday and writing: ‘I was offered a film role at 19, Harvey Weinstein came on board and wanted me to screen test in a bikini. I refused & lost the job.’

She then added: ‘I’m sure there are many more…’

Hynes, who earlier in her career went by Jessica Stevenson, in now 44 and has starred in the two most recent ‘Bridget Jones’ films as well as number of theatrical productions, being nominated for a Tony in 2009 for her role in ‘The Norman Conquests’ on Broadway.

Her claim is remarkably similar to a blind item that has been floating a
round for over a decade, and is well known to many in Hollywood.

Writer and comedian Jack Howard noted that, replying to Hynes: ‘Holy s*** I knew the story but I didn’t know who it was about.’

Hynes did not reveal what the film was, but it would have been around 1991 or 1992 when Weinstein was beginning his ascent up the ranks in the movie industry while working in London.

It was also in 1991 when he allegedly sexually harassed the first of his many alleged victims who came forward to speak with the Times on the record about his behavior.

Laura Madden said that she was asked by Weinstein to give him massages while he was staying at hotels in Dublin and London at that time.

‘It was so manipulative,’ said Madden.

‘You constantly question yourself – am I the one who is the problem?’

Judd recounted her encounter with Weinstein, saying she was doing night shoots for her 1997 film ‘Kiss the Girls’ when she got an invite to meet with Weinsten that she could not pass up.

She said she felt uncomfortable from the start and ordered cereal from room service because it would arrive quicker than a hot meal.

Judd said she was asked to give Weinstein a massage and then a shoulder rub, both of which she declined while trying to get herself out of the room.

That is when he allegedly asked her to help him pick out his clothes for the day and then watch him shower.

‘I said no, a lot of ways, a lot of times, and he always came back at me with some new ask,’ said Judd.

‘It was all this bargaining, this coercive bargaining.’

She eventually made her escape by joking that Weinstein would have to help her win an Oscar before she would be willing to touch him, stating that the prestige of working for his studio made it too difficult to forcefully shut down his harassment.

‘There’s a lot on the line, the cachet that came with Miramax,’ explained Judd.

Judd previously wrote about the same experience in 2015 for Variety without naming Weinstein, simply saying it was a studio mogul.

‘I was with a bunch of other actors, and it was critical that it was actors: The exact same thing had happened to them by the exact same mogul,’ wrote Judd.

‘Only when we were sitting around talking about it did we realize our experiences were identical. There was a mutual strengthening and fortification of our resolve.’

She later wrote in that piece: ‘The ultimate thing when I was weaseling out of everything else was, “Will you watch me take a shower?” And all the other women, sitting around this table with me, said, “Oh my god-that’s what he said to me too.”‘