Harvey Weinstein’s wife, Georgina Chapman, has announced that she is leaving the movie mogul after a string of woman claimed that he had sexually harassed or assaulted her.

‘My heart breaks for all the women who have suffered tremendous pain because of these unforgivable actions. I have chosen to leave my husband,’ she told People.

‘Caring for my young children is my first priority and I ask the media for privacy at this time.’

At the same time as Chapman made the announcement, Weinstein made a departure of his own – to Europe, by private jet.

There he will undergo therapy for sex addiction and behavioral issues, TMZ reported. 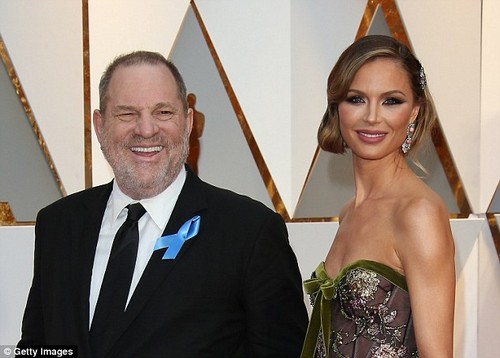 Georgina Chapman, 41, announced she is leaving husband Harvey Weinstein, 65, (both pictured in February) on Monday, five days after he said she was ‘100 per cent’ behind him 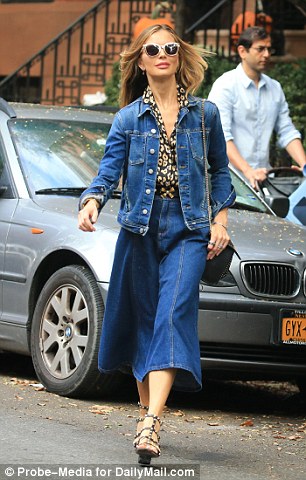 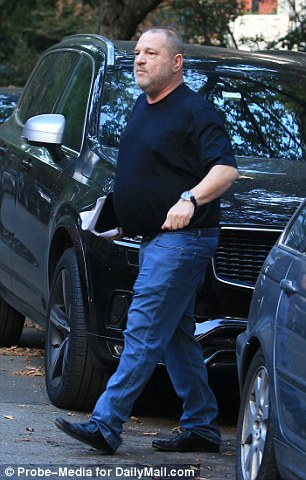 Chapman (seen left on Friday) made the remark as it emerged that Weinstein (right) was flying to Europe for sex rehab. Chapman reportedly relied on him to promote her fashion company

Weinstein will submit himself to a live-in facility, in which he hopes he will be able to clean up his act and return to the US.

According to TMZ’s source, the hotheaded producer is surprisingly calm about the chaos that has beset him this week.

‘He has his moments where there are bursts, but for the most part he’s pretty calm,’ the insider said.

Weinstein also hopes that he will still be able to serve the Weinstein Company, from which he was fired by the board on Sunday, in some capacity.

His legal team are in talks with the company, and according to an insider, he ‘wants to come back with fresh, new ideas’.

She is also the co-founder of high-end women’s fashion line Marchesa – and before the announcement of her split from Weinstein, sources said that she was struggling to save the brand from being tarnished by her husband’s allegations.

But leaving him might present other problems for the beleaguered British designer. 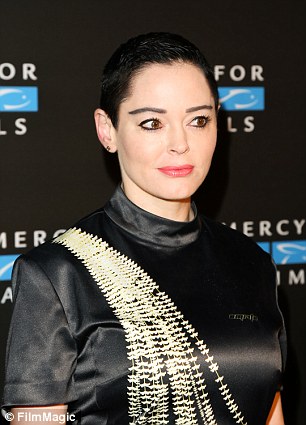 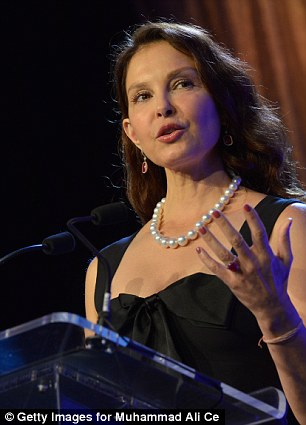 Chapman is reportedly concerned that his past will affect her fashion company, Marchesa – but also worried that without him she won’t have the A-list connections to ensure the brand remains high-profile. The couple are seen here in 2012

A source told People that she is terrified that the line, which is loved by many of the women who have starred in her husband’s films, will founder without his help.

That’s because he – as one of the heaviest hitters in Hollywood – has access to the A-list stars that can keep the brand in the public eye.

A TV fashion source said: ‘Harvey is the one with all the friends. It’s going to be a tough time for her and Marchesa’.

A New York fashion publicist who did not want to be named told the H
ollywood reporter: ‘No star is ever going to want to wear the brand again.’

Weinstein is good friends with Vogue editor Anna Wintour and the two have co-hosted fashion and Democratic political fundraising events.

Chapman’s departure will likely come as a shock to Weinstein, who had boasted last week that his wife was ‘standing by me 100 per cent’.

He has also said she will be one of the people to ‘kick my a**’ and help him become a better man.

The couple were yesterday said to be holed up in a Los Angeles hotel together.

Gwyneth Paltrow: The star told the New York Times that Weinstein touched her and suggested having joint massages in the bedroom before she started shooting Emma. She said she told her then boyfriend Brad Pitt about the incident and he confronted the mogul.

Angelina Jolie: Jolie told the Time she had to turn down advances from Weinstein in the late 1990s and she chose never to work with him again. She said she warned other women about him.

Judith Godreche: The French actress says Weinstein tried to massage her and pull off her sweater after asking her up to his Cannes suite to see the view in 1996.

Dawn Dunning: Aspiring actress says she was called to a meeting about future film projects. When she arrived Weinstein presented her with three scripts for his next three movies which he would let her star in, only if she had three-way sex with him. She fled the hotel.

Tomi-Ann Roberts: Weinstein met her when she was serving tables and told her to meet him at his home. When she arrived he was in the bath and told her she would give a better audition if she was naked. She says she refused and left.

Asia Argento: The Italian actress has accused Weinstein of forcibly performing oral sex on her when she was 21. ‘He terrified me, and he was big. It wouldn’t stop. It was a nightmare.’  She said she went on to have consensual sex with him over the years that followed. She documented the alleged attack in her 2000 film Scarlet Diva.

Katherine Kendall: The Swingers actress was told Weinstein had to stop off in his apartment to pick something up after a screening. He changed into a bathrobe and told her to massage her. When she resisted she said the mogul returned naked and chased her.

Lucia Evans: Aspiring actress claims Weinstein forced her to perform oral sex on him. Speaking to the New Yorker, she said that she suffered years of trauma after the incident which occurred in a ‘casting meeting’ in a Miramax office in Manhattan.

Mira Sorvino: The Mighty Aphrodite actress told the New Yorker that Weinstein tried to massage her in a hotel room at the 1995 Toronto International Film Festival He then went to her home in the middle of the night but she called a male friend to protect her. She said turning down the mogul adversely affected her career.

Rosanna Arquette: The actress also said her career suffered after she rebuffed Weinstein’s advances. At a hotel meeting he tried to put her hand on his erect penis, she claims.

Ashley Judd: Judd’s film roles include the thriller Kiss the Girls – and she says that during the filming of that movie Weinstein repeat
edly asked her to watch him shower. She was one of the women who spoke out to The New York Times this week, saying: ‘Women have been talking about Harvey amongst ourselves for a long time, and it’s simply beyond time to have the conversation publicly.’

Zelda Perkins was 25 when, as an assistant of Weinstein’s in London, she reportedly confronted the mogul for harassing her and ‘several’ other women; she later settled out of court

Elizabeth Karlsen, an Oscar-winning producer, said a female executive told her almost 30 years ago that she had found Weinstein naked in her bedroom in a Miramax-rented property

Lauren Sivan: The former Fox news host said that Weinstein trapped her in a closed restaurant and masturbated in front of her to completion in 2007. He took her to a closed restaurant beneath a club she had visited and attempted to kiss her, then when she refused he cornered her and made her watch him touch himself, according to The Huffington Post.

Jessica Hynes: The British actress, best known for her roles in the Bridget Jones movies and for co-creating and co-writing the sitcom Spaced, said she was invited to audition for Weinstein when she was 19 – in a bikini. Hynes, formerly known as Jessica Stevenson, said she refused to wear the skimpy item – and lost the job.

Romola Garai: British actress Romola Garai said she felt ‘violated’ following a meeting with Harvey Weinstein in his London hotel room when she was 18 in which he was in a bathrobe. Garai, best known for her role in ‘Atonement’, said she had already been hired for a part but was told to audition privately with the Hollywood mogul because ‘you had to be personally approved by him’. ‘Like every other woman in the industry, I’ve had an ‘audition’ with Harvey Weinstein,’ she told The Guardian. ‘So I had to go to his hotel room in the Savoy and he answered the door in his bathrobe. I was only 18. I felt violated by it’.

Sturgeon: Poll on the Brexit deal could be ‘irresistible’ 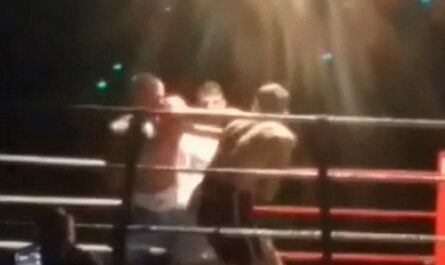 Jakub Moczyk died after being knocked out with one punch

30 giraffes cross road in front of tourists in Kenya