Hillary Clinton is still declining to say whether she will return money her family received from Harvey Weinstein, after four days of mounting pressure that has led Democrats and Hollywood icons to distance themselves from the fired movie producer amid accusations of sexual harassment.

The former presidential candidate has pointedly avoided commenting on the allegations against Weinstein, one of her most loyal donors, and instead busied herself promoting her speeches and newly-released children’s book.

The Clinton Foundation, which has received up to $250,000 from Weinstein, has not responded since Friday to multiple requests from the DailyMail.com about whether Clinton will return the money received by the foundation or her political campaign.

On Friday, Clinton gave a speech to Stanford University ‘about threats to western democracy,’ and urged her social media followers to ‘tune in’ and watch the speech live. 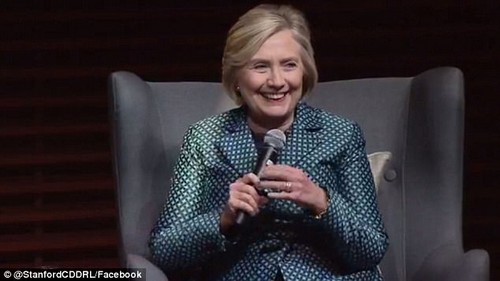 Saying nothing: Hillary made a lengthy public appearance at Stanford on Friday, the day after the Harvey Weinstein allegations emerged, but said nothing about them 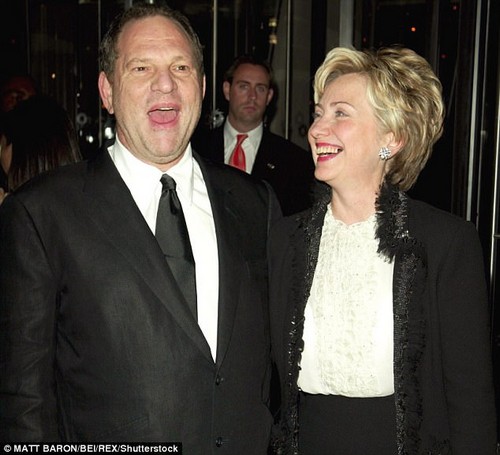 Friends like these: Harvey Weinstein was a personal donor to Hillary Clinton and also brought in his celebrity friends to give money to them 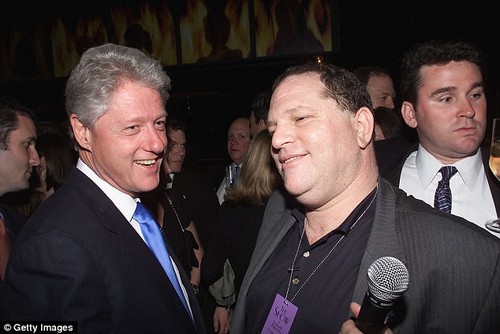 Serial sex harasser: Harvey Weinstein was revealed to have made payments to eight women and more are coming forward to tell their stories, including a new reporter who told how he masturbated in front of her

Over the weekend, she went on Twitter to promote a friend’s book that encouraged girls to run for office and criticized the Trump administration’s birth control policy.

‘Rolling back no-copay birth control shows a blatant disregard for medicine, science, & every woman’s right to make her own health decisions,’ wrote Clinton on Saturday.

Clinton also sat down for an interview with Parents.com to plug her newly-released children’s book It Takes a Village, which she said she hoped would help readers ‘understand that they are a part of a diverse community.’

But Clinton has yet to comment on Weinstein, even after at least seven Democrats and the Democratic National Committee stepped forward since Thursday to say they are returning Weinstein’s campaigns donations or re-gifting them to charity.

Pressure is growing for Clinton to at the very least comment on Weinstein, after at least seven Democrats and the Democratic National Committee stepped forward since Thursday to say they are returning Weinstein’s campaigns donations or re-gifting them to charity.

And celebrity supporters of Clinton also finally joined the chorus of condemnation against Weinstein, including Meryl Streep and Glenn Close on Monday, after he was fired.

But Clinton herself made a lengthy public appearance on Friday and repeatedly used her Twitter account without saying a word about Weinstein.

Streep called Weinstein’s behavior ‘inexcusable’ and an ‘abuse of power.’

What she said: Nothing on Clinton’s twitter account made any reference to Harvey Weinstein – but she did plug her book
and a speech. It is unknown if she was paid for the speech

‘Each brave voice that is raised, heard and credited by our watchdog media will ultimately change the game,’ said Streep.

Judi Dench called the news ‘horrifying,’ while Glenn Close said she was ‘angry and darkly sad’ about the revelations.

Close called on Hollywood to ‘create a new culture of respect, equality and empowerment, where bullies and their enablers are no longer allowed to prosper.’

Director Kevin Smith wrote on Twitter that he felt ‘ashamed’ that he had let Weinstein finance many of his early films – writing that ‘now I know while I was profiting, others were in terrible pain.’

Clinton’s silence is a contrast to her election platform. The candidate campaigned as advocate for women and girls and has continued to speak out against sexual harassment during her recent book tour.

She recently said women who support President Trump are ‘disrespecting themselves’ because of what she characterized as his sexist treatment of women.

‘Why are they opening the door to have someone say that about them in their workplace, in a community setting? Do they not see the connection there? And I think that’s one of the problems with sexism,’ said Clinton.

But her lack of response is in line with how the Clinton Foundation has reacted to past controversies over its donors.

The foundation has not bowed to pressure to return large donations in the past, even when they came from a registered sex offender, a money-man for a Nigerian despot, and repressive governments like Saudi Arabia.

Among the donations they have received are $25,000 from Jeffrey Epstein, the billionaire convicted of soliciting sex from a 14-year-old.

Weinstein was fired from his leadership role at Miramax on Sunday, just a few days after the New York Times reported he had reached financial settlements with at least eight women related to sexual harassment allegations over the years.

Actresses and female employees of Weinstein claimed he made inappropriate sexual advances since the 1990s, according to the New York Times.

Actress Ashley Judd told the paper that Weinstein once asked her to watch him shower and tried to give her a massage during a purported ‘business meeting’ in a hotel room. Female employees of Weinstein reported similar experiences, according to the Times.

The news prompted Democrats to distance themselves from Weinstein.

Weinstein has been one of Clinton’s most loyal political donors over the years. The Miramax founder hosted several fundraisers for Clinton at his home during the 2016 race, with celebrities including Leonardo DiCaprio, Jennifer Lopez and Anna Wintour.

He also gave between $100,000 and $250,000 to the Clinton Foundation, the Clintons’ charitable group which came under scrutiny for accepting money from foreign governments and financiers while Hillary Clinton was at the State Department.

Weinstein backed Clinton against Barack Obama during the 2008 Democratic primary.

The Miramax founder was so vehement in his support of the former New York senator that he reportedly threatened to cut off donations to then-House Speaker Nancy Pelosi if she did not support a re-vote to help Clinton during her contentious primary battle against Obama.

Weinstein later patched up with relationship with Obama and became one of the president’s largest bundlers during his 2012 re-election.

The Clintons have previously been reluctant to return money to controversial foundation donors, even under pressure.

In 2006, the foundation took $25,000 from billionaire Jeffrey Epstein, who was under federal investigation for child sex charges at the time.

Epstein was accused of paying girls as young as 14 to engage in sex acts with him and his wealthy friends – and evidence emerged that he may have filmed some of these encounters at this mansion for blackmail.

Epstein’s penchant for young girls was so well-known that his private plane was nicknamed the ‘Lolita Express.’

But even after Epstein pleaded guilty to soliciting underage prostitution in 2008 – and served 13 months in prison – the foundation did not return the money.

The Clinton Foundation has also received between $1 million and $5 million from Gilbert Chagoury, a Lebanese billionaire who made his money in Nigeria as a close confidante of the country’s then-dictator, Gen. Sani Abacha.

Abacha looted billions from Nigeria’s treasury during his reign, and only a portion of the money been recovered since his death.

Some of this stolen money was traced to overseas bank accounts controlled by Chagoury. The businessman was fined 1 million Swiss francs and forced to return $65 million to Nigeria.

The Clinton Foundation has also taken as much as $1 million from Qatar and $25 million from Saudi Arabia, governments with discriminatory and oppressive laws against women.

However, the Clinton Foundation has not returned the money in these cases and instead kept quiet and let criticism of its donors die down.