Stephen Paddock fired on a security guard before, not after, he committed mass murder, police said – a revision to the official police timeline that raises huge questions about the Las Vegas killings.

Previously, police said hero guard Jesus Campos had distracted Paddock from his rampage – being hit in the process – just a minute before police arrived.

Now it’s been confirmed that Campos was shot six minutes before Paddock began firing on crowds.

That raises questions about what the killer had been planning before Campos disturbed him, and why police did not arrive sooner.

Stephen Paddock (pictured) shot a security guard in the Mandalay Bay hotel 5 minutes before firing on revelers – not after he had been firing on the crowds for 10 minutes, cops said Monday 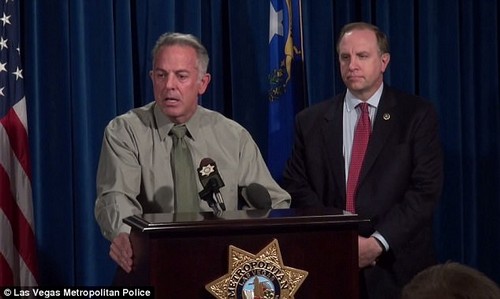 The comments made by Sheriff Joseph Lombardo (pictured Monday) contradict the previous timeline, which said Paddock had been disturbed from his massacre by the guard, whose intervention had ended the bloody killings 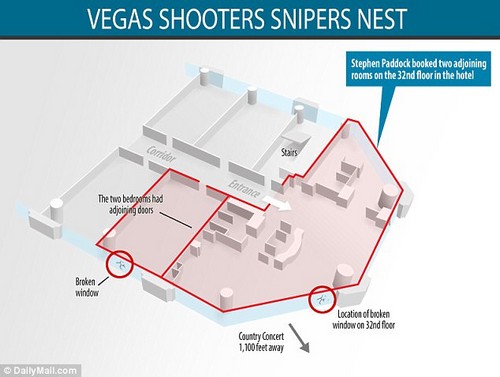 Guard Jesus Campos approached Paddock’s room down the corridor, investigating an alarm – likely due to Paddock tampering with the doorway to the stairwell next to his suite. Paddock then fired on him at 9:59pm, and opened fire on people below at 10:05pm

Speaking on Monday, Las Vegas Sheriff Joseph Lombardo said that Jesus Campos had approached the room on the 32nd floor of the Mandalay Bay hotel not because of gunfire, but because of an open-door alarm that had gone off nearby.

Paddock then apparently saw him on the video cameras he’d rigged up in the hall and opened fire on him. That occurred at 9:59pm.

Campos ‘immediately, upon being injured, notified security of his situation,’ Lombardo said.

Paddock then turned his gun on the 22,000 revelers at the Route 91 Harvest country music festival five minutes later, per the original timeline of 10:05pm, Lombardo said.

That contradicts what had been said last Wednesday by Lombardo, who claimed that Campos had approached Paddock while he was firing at around 10:15pm.

Paddock turned his gun on Campos, before stopping firing altogether, he said.

Police arrived just minutes later to a silent hallway, Lombardo claimed – at which point they assumed Paddock was barricaded in and no longer a threat to revelers.

With the hall silent, they – and Campos, who was injured but wanted to help – were free to evacuate the rest of the rooms leading up to Paddock, he said.

That was used as an excuse by Lombardo to explain the delayed response – arguing that even if Campos had not been there, other officers would have disrupted the massacre themselves.

But in the new timeline that excuse no longer works; Campos lay wounded for six minutes before Paddock started firing, police now say.

This is the original timeline of events given out by police on Wednesday.

10:05pm: Paddock fires his first shots on the crowd, as seen on CCTV.

10:12pm: First two officers arrive on the 31st floor and announce gunfire is coming from directly above them.

10:14pm: Guard Jesus Campos approaches Paddock’s room and is shot at 200+ times, but only injured.

10:15pm: The last shots are fired from the suspect, per bodycam, due to Campos’ intervention.

10:18pm: Campos tells the cops he was shot and gives them the exact location of the suspect’s room.

10:26-10:30pm: With Paddock quiet, eight additional cops arrive and they decide to evacuate the rooms on the floor.

10:55pm: Eight officers arrive in the stairwell next to the suspect’s room and find the door tampered with and a camera on a room service cart outside; they decide to hold off.

11:20pm: Paddock’s room is breached and police enter the room to find him dead.

This is the new timeline given out on Monday.

9:59pm: Campos approaches Paddock’s room looking for an alarm going off at a door nearby – likely from the stairwell. He is shot at and injured. He immediately notifies hotel security.

10:15pm: The last shots are fired from the suspect for reasons unknown.

10:18pm: Campos, who has been stricken for almost 20 minutes, tells police about Paddock’s room.

10:26-10:30pm: With Paddock quiet, eight additional cops arrive and they decide to evacuate the rooms on the floor.

10:55pm: Eight officers arrive in the stairwell next to the suspect’s room and find the door tampered with and a camera on a room service cart outside; they decide to hold off.

11:20pm: Paddock’s room is breached and police enter the room to find him dead.

Originally police said Campos arrived at the room at 10:15pm, which was the point at which Paddock stopped firing. They now have no idea why he stopped firing on the crowds

It also means that Paddock fired for ten minutes on the crowd before stopping abruptly – for reasons that now have police baffled.

Of course, that in turn leaves a 16-minute window in which Paddock was left undisturbed while hundreds were injured and dozens died, and a 19-minute window between Campos being struck and cops arriving.

Speaking on Monday, Lombardo seemed to want to shift some of the blame for the discrepancy onto Campos.

‘As you might imagine, Mr Campos was not only injured when he was fired upon as he checked on the door alarm down the hall… he was also extremely shaken up about what had happened to him,’ Lombardo said.

‘He was able to confirm to us exactly what he heard and saw in the moments before he was shot.’

He later added: ‘In the press’s zest for information, in my zest to insure the public safety, in the calming their minds, some things are going to change. They are minute changes… what was said before was not completely inaccurate.’

It’s not clear which door Campos heard the alarm at, but previously Lombardo had said that SWAT teams approaching Paddock’s room from the stairwell next to it had found the stairwell’s door tampered with and sealed.

Lombardo also said on Monday that Campos heard Paddock drilling inside the room as he approached, possibly to install a camera or a gun.

That drill work was to the wall next to the doorway and not finished, the sheriff added.

When asked if he believed Paddock had stepped up the timeline and opened fire early because of the disruption, Lombardo declined to comment.

He also said that while he waited for police to arrive, Campos stopped a maintenance worker from entering the 32nd floor.

Also on Monday, Lombardo suggested that Paddock had planned to blow up nearby jet fuel tankers in the hopes of creating a distraction to escape. 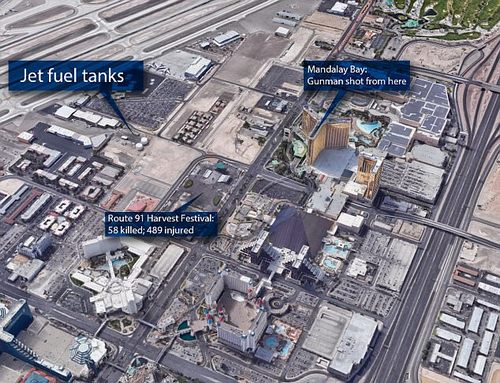 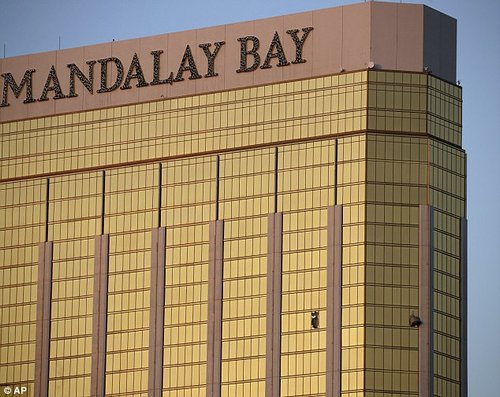 The second of the windows Paddock broke open (left) was perfectly in line with the fuel thanks. Thankfully, none of the shots were able to penetrate the tanks, which had since been repaired

Lombardo had previously said he believed Paddock intended to flee the scene of the massacre. When asked again, he said that ‘conversation’ was ongoing.

Although it wasn’t a department-wide belief, he said, he was ‘comfortable’ in saying that Paddock had hoped to flee.

‘The suspect, we know he attempted to shoot at the fuel tanks, we know he had some personal protection equipment in the room, we know the car in the parking garage contained binary explosives,’ he said.

‘I would be comfortable saying, which I believe, that depending on the splash damage caused by the exploding tanks he made in the shooting, would it have enabled the first responders to direct their attention to other locations, to help Mr Paddock leave the hotel.’

Paddock is now confirmed to have checked into the hotel on the 25th, and police are now t
rying to work out what he did between then and the 28th, Lombardo said.

It’s not believed he was staying in the hotel at that time.

He added that investigators had documented more than 200 instances of Paddock’s movements throughout Las Vegas in the lead-up to the shooting.

At none of those points did police find any indication he was seen with anyone else, Lombardo said, reiterating that Paddock had no ties with ‘any known terorrist groups or ideologies’.

Perth model reveals how Vogue editor made fun of her looks