Liar viewers were left on the edge of their seats as the show took a heart-stopping turn in the final moments of what viewers called the ‘scariest’ episode yet.

Laura put herself in danger when she tried to prove Andrew’s guilt by drugging and kidnapping him, intending to say he had raped her again. But the plan went awry when Andrew broke free from his ties and attacked Laura in a deserted boatyard, leaving her fearing for her life.

Viewers reeled as the tense game of cat and mouse played out on screen only for Laura to be saved by Detective Inspector Vanessa Harmon with seconds to spare.

One posted: ‘Oh my godddd! Best thing I’ve watched in ages!’ Another tweeted: ‘Amazing episode tonight but I think I need a glass of something, my nerve are shot! #Liar’ 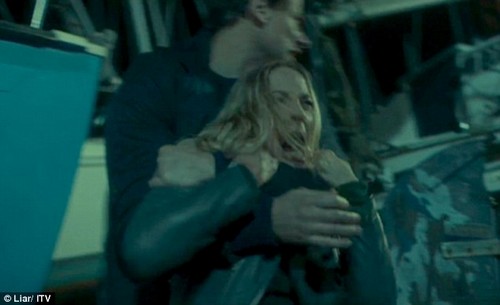 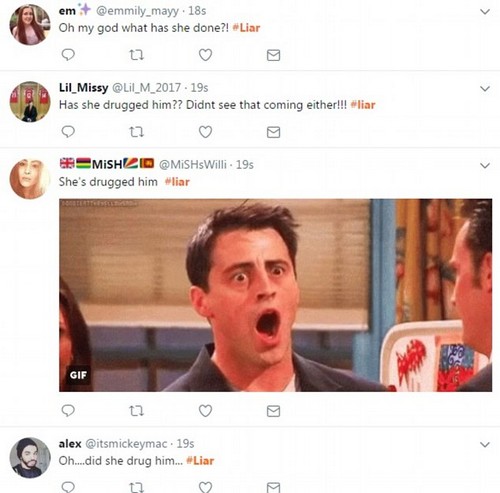 Suspense: Viewers were left guessing as Laura sought to take her revenge on her attacker

The pregnant DI had been raped in the previous episode by Andrew, where viewers watched as he crept in her home and secretly drugged a health drink.

She realised the horrific truth following an examination at the hospital to check her baby was still alive and eventually filed a report, confiding in her detective partner.

Vanessa vowed to bring down Andrew in the closing scenes of tonight’s episode, but Andrew was confident she wouldn’t be able to find any proof.

The sinister moment left viewers on the edge of their seats as they watched Laura’s plan fall apart. 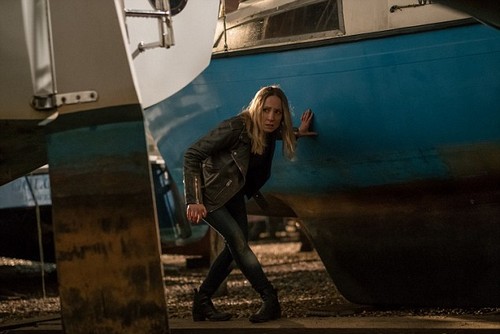 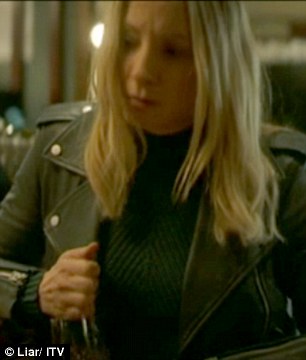 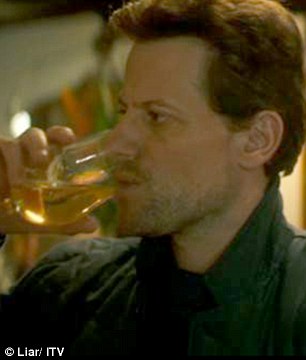 Laura (played by Joanne Froggatt) had drugged Andrew (played by Ioan Gruffudd) in the pub where she pretended to be drunk. Fooled by her he was unaware of what she had done 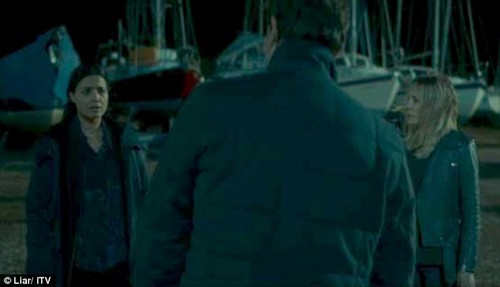 Laura was saved at the last minute by DI Vanessa Harmon, who had earlier on realised she had been Andrew’s next victim

One wrote:
‘Pretty much spent the last 10 minutes of Liar shouting at the telly. Hooked.’ Another tweeted: ‘#Liar is so good, I want to watch more. He makes my blood boil!’

A third agreed: ‘That episode had me on the edge of my seat – what’s going to happen next’.

The penultimate episode was full of revelations from Laura discovering her sister’s affair with her ex-boyfriend; Andrew admitting he had ‘dared’ his late wife to kill herself; and the location of Andrew’s secret lair. 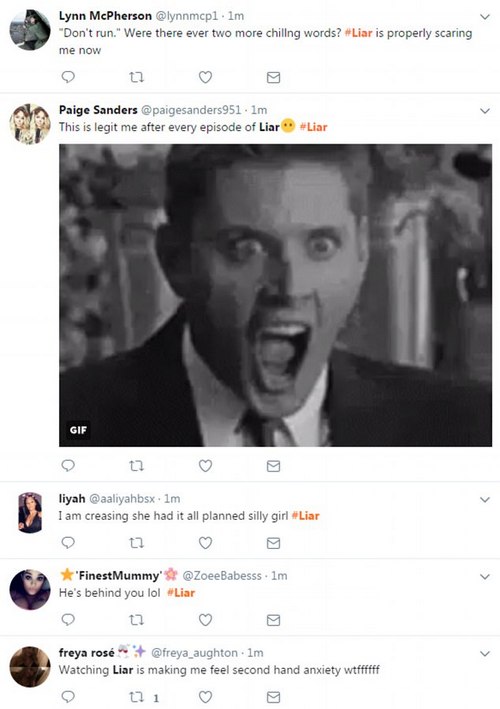 On the edge of their seats: Viewers’ reactions changed as Laura started to reveal her plan

The surgeon was seen visiting someone, believed to be his elderly mother, at her home and going to a garden shed full of tools and a video camera.

In the garden shed, which was secured with a padlock, Andrew pulled out a camera to watch what could have been DI Vanessa’s rape.

He then placed the memory card in a case along with eight others, indicating there have potentially been nine victims in total, maybe more.

Laura was also left devastated when she put the pieces together that her sister Katie had been sleeping with her then boyfriend Tom. 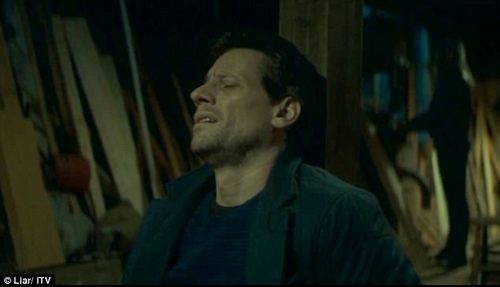 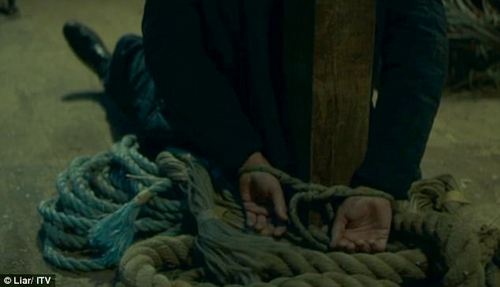 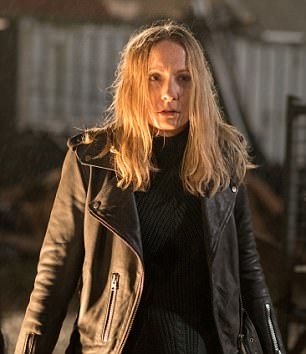 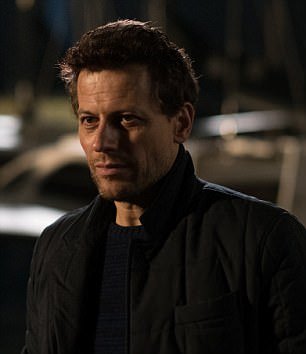 Tom had helped her to secure the GHB that she drugged Andrew with and their original plan had been to plant it in his work locker using her sister’s work pass.

But she ventured out on her own instead, pretending to be drunk and meeting Andrew in a pub witnessed by other punters.

After he became woozy, Laura scratched his neck before then bungling him into his car and driving him to a boat yard where she managed to single-handedly drag him inside and tie him up.

Laura revealed her cunning plan was to say he had raped her again, but when he slipped his ties she had to run for her life. 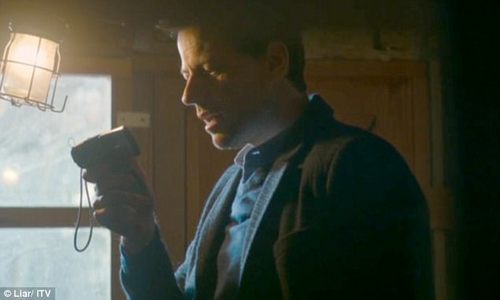 Andrew visited his secret lair in the episode, watching a recording of what viewers assumed was of the rape of Detective Vanessa Harmon 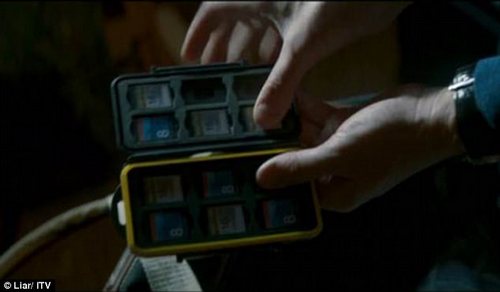 It was also shown that he had nine memory cards in total, which could potentially be the total of his previous victims 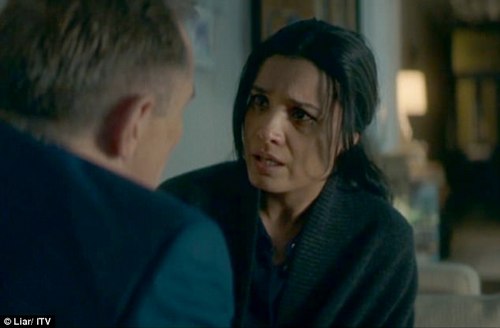 Before and after pictures of California wildfires