Harvey Weinstein was just moments away from possibly being cuffed and thrown in jail back in 2015 when the NYPD set up a sting operation with the Italian model who accused him of groping her during a business meeting.

Reports at the time time revealed that Ambra Battilana had agreed to record her conversation with Weinstein on March 28, 2015 when the two met at the Tribeca Grand Hotel, one day after she accused the movie mogul of groping her breasts and sticking his hand under her skirt.

An NYPD commander with knowledge of the case has now revealed to The Daily Beast, however, that detectives were on the scene and hoping to catch Weinstein in the act so that they might be able to arrest him on the spot.

The detectives thought they had their big break too, when according to the commander, Weinstein apologized to Battilana and told the model: ‘Listen, come up to my room.’

At the last second, however, Battilana could not go through with it out of safety fears and the pair returned downstairs, where Weinstein was soon picked up by the detectives and taken in for questioning. 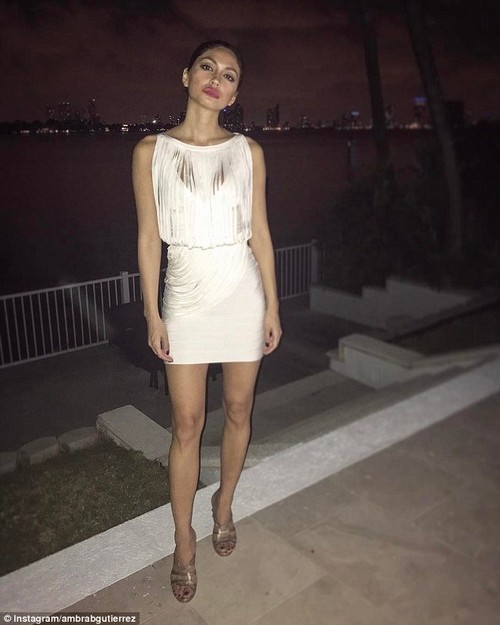 Speaking out?: Ambra Battilana (above), the Italian model who accused Harvey Weinstein of groping her in 2015 posted a series of cryptic tweets on Tuesday 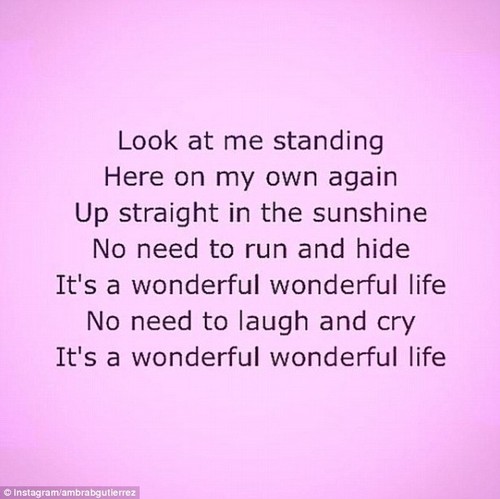 Battilana is one of the eight women who allegedly received a settlement from Weinstein according to the explosive New York Times investigation that was released on Thursday.

She has not spoken about the incident in the past two years, which is likely due to the fact that she was asked to sign an NDA after receiving her settlement.

Battilana did however post a meme on Twitter early Monday that contained lyrics from the song ‘Wonderful Life’ by Black.

‘Look at me standing / Here on my own again / Up straight in the sunshine,’ read the post.

She then shared a photo late that evening which showed her blowing a kiss, writing: ‘Good Morning to all the good people out there’.

Charges were ultimately never filed against Weinstein, who in the course of his conversation with Battilana at the hotel went from apologizing for what he did to asking her to go up to his room.

Soon after the decision to drop the case was made, Manhattan District Attorney Cyrus Vance received a $10,000 donation from Weinstein’s longtime litigator.

David Boies cut the five-figure check to the Cyrus Vance for Manhattan District Attorney Campaign on August 24, 2015, making it one of the large donations that Vance received that cycle.

That financial gift to Vance’s campaign came on the heels of an April 10 announcement that district attorney’s office would not file charges against Weinstein.

Battilana, then 22, had not only immediately notified police but also recorded a telephone call in addition to her exchange with Weinstein at the hotel the day after the alleged incident.

That was not enough however for the district attorney’s office to pursue charges.

Pay day: Despite having taped audio of Weinstein admitting to the incident, no charges were ever filed, and months later the DA got $10K from Weinstein’s lawyer (above)

Closing in: It is now being revealed that the day after she was groped by Weinstein (above on Friday), NYPD detectives were ready to arrest the disgraced mogul

Three days after meeting with Battilana at their office, a spokesperson for Vance announced that the probe into the incident did not find enough evidence to pursue a case.

‘This case was taken seriously from the outset, with a thorough investigation conducted by our sex crimes unit,’ said Joan Vollero at the time.

‘After analyzing the available evidence, including multiple interviews with both parties, a criminal charge is not supported.’

Vollero denied that there was an correlation between the donation and the decision to not file charges in a statement to International Business News, the first outlet to report on the donation.

A spokesperson for Boies’ law firm also commented, stating: ‘David Boies has been a supporter of the District Attorney since long before 2015, including before he was first elected, and has never spoken to him about Harvey Weinstein.’

That revelation came just days after it was revealed that Vance had also received a $25,000 donation from Trump Organization lawyer Marc Kasowitz after the district attorney’s office declined to file charges against Ivanka and Donald Jr.