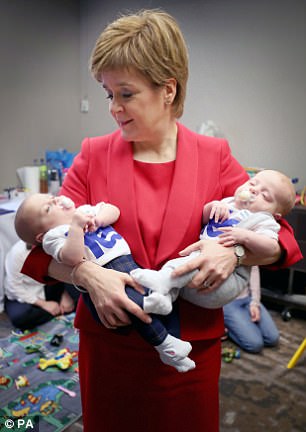 Nicola Sturgeon will outline her vision for 10 more years of SNP rule today but faces party activists against a backdrop of plunging support for independence.

A new poll today puts backing for separation 14 points behind the Union just months after the SNP was battered at the ballot box.

The SNP leader is expected to focus on domestic policy in her crunch address to delegates this afternoon, closing a conference at which independence has been absent from the official agenda.

Ms Sturgeon will hint at what she still hopes will be an independent future as she calls on activists to put Scotland ‘in the driving seat’.

But it may not satisfy party members desperate to re-run the 2014 referendum in defiance of a wider electorate which sacked 21 SNP MPs in June and stripped Ms Sturgeon of her Holyrood majority in May.

She lashed ‘xenophobic’ Britain and insisted the independence dream was about ‘vision and hope’.

Ms Black said: ‘Let’s get out there and let’s get independence.’

Activists hailed the 23-year-old with a huge standing ovation as the question of independence finally broke into public view after three days of stage managed conference action.

In her speech this afternoon, Ms Sturgeon will say: ‘Over the past ten years, we have led the way. We should be proud of what we achieved.

‘Our focus now is on the next ten years and beyond. The world we live in today is changing at a faster pace than we have ever known.

‘The challenges we face are generational. Our responses must be transformational.’

The First Minister will spell out the details of her programme for government, announcing 30 hours of free childcare for parents and more early years education.

But she will also claim Scotland faces a battering as it is dragged through the Brexit process by Westminster. 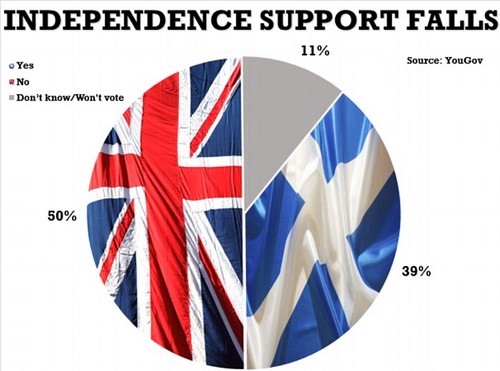 A new YouGov poll for The Times today places support for the Union at 50 per cent, against 39 per cent for independence. The gap widens to 14 points if Don’t Know responses are excluded from the sample. 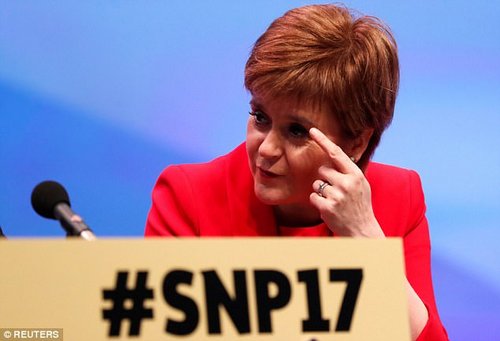 Ms Sturgeon will tell activists: ‘We know that Scotland does better when decisions are taken here in Scotland.

‘So as we look ahead we face a choice: We can trail in the wake of the change that is coming – or we can choose to shape our own future.

‘Let’s resolve this today: Let’s not wait for others to decide for us. Let’s put Scotland in the driving seat.’

A new YouGov poll for The Times today places support for the Union at 50 per cent, against 39 per cent for independence.

The gap widens to 14 points if Don’t Know responses are excluded from the sample – leaving independence far behind the 44.7 per cent it secured in 2014. 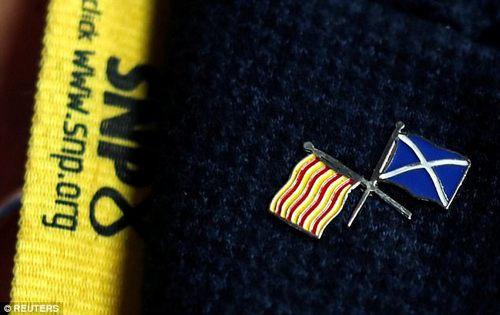 The demand for Scottish independence has bubbled under the surface at this week’s conference. Debates

The poll also reveals more than half of Scots – 52 per cent – do not think there should be another referendum within five years.

Ms Sturgeon acknowledged in the summer her push for a new poll over Brexit cost the party seats on June 8.

She put plans to try and force a second referendum on the backburner – but has used this week’s conference to underline her belief the SNP still has a mandate to call a new referendum before the next Scottish elections in 2021.

The demand for independence has bubbled under the surface at this week’s conference, frequently being introduced to speeches and floor debates superficially on other subjects.

Tesco and Poundland allow use of old £1 past deadline

Gladiator stars show off youthful looks as they unite