Nicola Sturgeon today claimed a second Brexit referendum on the terms of the deal could become ‘irresistable’.

The SNP leader, speaking from her party conference in Glasgow, accused the Government of fumbling the negotiations and risking a ‘disastrous’ no deal crash out.

Ms Sturgeon said the 13 Scottish Conservative MPs held the ‘balance of power’ on whether Theresa May could push through a Brexit deal that exits the single market.

Brexiteers insist that not leaving the trading zone is tantamount to thwarting Brexit. 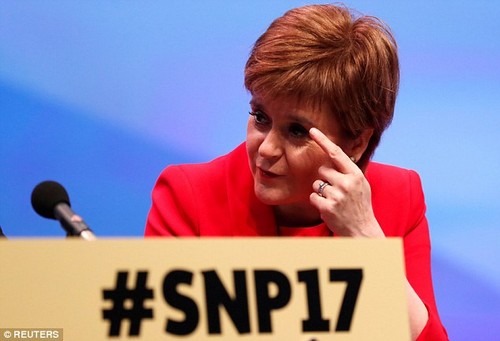 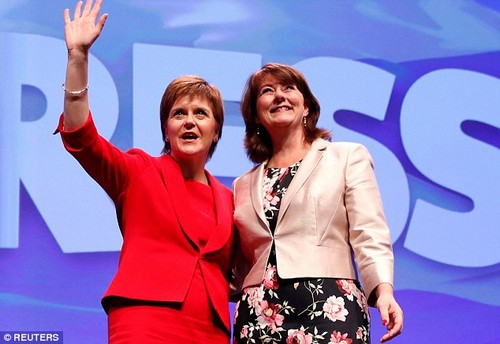 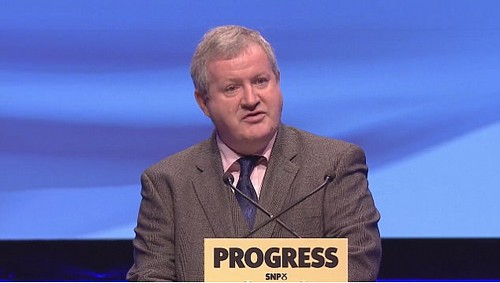 The renewed debate over Brexit comes on a day the SNP conference is focused on domestic policy in Scotland.

Scottish Finance Secretary Derek Mackay will blame spending plans in Westminster for tight finances in Edinburgh in his main address to conference later.

Largely missing from the conference agenda is the SNP call for independence after losses at the general election in June halted Ms Sturgeon’s call for a re-run of the 2014 referendum.

The SNP leader used interviews this morning to attack the Government over Brexit.

She told the Radio 4 Today programme Mrs May was risking a ‘disastrous’ no-deal Brexit.

Ms Sturgeon said: ‘I have said – I’m just trying to be frank here – given that people when they voted in the EU referendum… didn’t have a clear idea what they were voting for.

‘Fifteen months on we still have no clarity on what the outcome is going to be.

‘I think the case for a referendum, not on the principle of EU membership, but on the terms of the deal may actually become quite difficult to resist.’

She added: ‘Part of the reason I’m not there is because we don’t know what the outcome is going to be yet.

‘But if we end up in a position where the UK crashes out of the EU with no deal at all, the consequences of that are so dire that I think the argument at that stage maybe irresistible that people should have the right to look at the outcome.’

The First Minister said she believed it was still possible for a soft exit from the EU and claimed the ‘arithmetic’ in the House of Commons bolstered her case.

She said: ‘We should not give up on a more sensible outcome to this process.’

The SNP leader, speaking from her party conference in Glasgow, accused the Government of fumbling the negotiations and risking a ‘disastrous’ no deal crash out

Ms Sturgeon said there was a Commons majority for staying inside the single market if the 13 Scottish Conservative MPs joined forces with Labour and the SNP.

STURGEON: I BACK STRACHAN TO STAY LONGER THAN MAY

Strachan is facing questions over his future after Scotland crashed out of World Cup qualification last night.

But Ms Sturgeon said she would still back the football chief to survive longer than the PM.

‘Being Scotland manager is a tough job with perhaps even more responsibility on their shoulders than a First Minister or Prime Minister, such is the importance of football to the nation

‘Last night’s result was really disappointing but people will continue to love their football and Gordon’s future is for him to decide.

‘Probably if I had to make a decision I would back Gordon Strachan over Theresa May.’

She said: ‘The Scottish Tories could hold the balance of power on this. And if they end up voting with the government to take Scotland out of the single market, I think they are going to have some very tough questions to answer.

‘So far since the general election the Scottish Tories have not shown any influence of power at all.

‘What I’m saying is, if they had the gumption, they could exercise, if they voted with the SNP and if Labour got its act together, there could be a majority in the House of Commons to stop a hard Brexit.’

Independence is almost totally absent from the SNP agenda in Glasgow this week.

But Ms Sturgeon insisted the party had not resiled from its commitment to independence despite her demand for a re-run over Brexit being halted.

The SNP leader said would not press for a new timetable until next year but refused to rule out a fresh contest on breaking up the Union.

‘People aren’t quite ready to set the date for making another big decision,’ she told BBC Breakfast.

‘Later next year hopefully we will see some of that clarity emerge.’

The SNP leader insisted ‘Scotland will become independent’ in future.

Ms Sturgeon admitted: ‘We didn’t win the referendum three years ago, we now have to build that case.’

Westminster leader Mr Blackford told the conference his team of 35 MPs were proving the real opposition to the Tories in Westminster.

BACK PAY FOR TRIAL SHIFTS, MAY TOLD

Theresa May was challenged to back draft SNP laws to make sure trial shifts are paid today.

Stewart McDonald, the Glasgow South MP, has tabled a private members’ bill that would outlaw companies bringing workers in for a ‘trial shift’ without paying them.

The draft law will only be debated on a handful of Friday sittings in the Commons and has no chance of reaching the statute book without Government help.

Mr Blackford called for bipartisan support for the Bill in his main speech to the SNP conference today.

He said: ‘It is the SNP who are putting forward the progressive alternative in Westminster, such as our bill to end exploitative trial shifts.

‘It is a scandal that disproportionately effects our young people just starting out and those looking to get back into work from unemployment or having a child.

‘No one should be deprived pay for a fair day’s work- Theresa May and Jeremy Corbyn must support this bill. They may be keen to talk the talk on workers’ rights – now they must walk the walk.’

He claimed: ‘SNP MPs will always stand up for scotland – for our NHS, our universities, our food and drink sector, and the many other industries and communities that stand to lose out if the Tory Brexiteers get their way.

‘Of course, as the damage of Brexit becomes clearer, and as right-wing Tory policies continue to make families across Scotland worse off – we know that independence remains the only way to truly shape our own future.

‘But for as long as we remain tied to Westminster, you can be sure that our SNP MPs will continue to provide the strong voice that Scotland needs.’

In his speech later, Mr Mackay will say that while the Tories can find cash for their ‘grubby deal’ with Northern Ireland’s Democratic Unionist Party (DUP), their austerity agenda is putting public spending north of the border under pressure.

The Scottish Government’s budget has been cut by 9.2% in real terms over the last 10 years, Mr Mackay will argue, while at the same time ministers in Edinburgh must spend increasing amounts mitigating ‘cruel’ Conservative policies, such as the so-called ‘bedroom tax’.

In addition the SNP insists the ‘completely unjustifiable’ decision by the UK Government on VAT payments by Police Scotland costs the country tens of millions of pounds.

Mr Mackay will say that over the 10 years the SNP has been in power at Holyrood, the party has ‘used the powers of the parliament to chart a different, more progressive course’.