At New Delhi’s Gandhi Smriti, a poignant memorial site on the spot at which India‘s revered freedom fighter, Mahatma Gandhi, was assassinated in 1948, visitors, noticeably more foreign than Indian, line up sombrely to offer homage.

“Gandhi is being forgotten by his own people. I see fewer Indians visit in recent years. People from foreign countries appear to be more interested in his life and ideals,” a volunteer guide manning the entrance says.

“Perhaps we have become a more consumerist and divisive society so far removed from Gandhi’s teachings that such a world icon is neglected in his birthplace,” he says, requesting anonymity.

Anand Jujaru, an IT professional from Bengaluru who is visiting with his 10-year-old son Chinmaya, agrees.

“The only way we Indians know Gandhi is on currency notes and by the roads named after him. Honestly, I think we have become cynical. No one remembers what he did or the sacrifices he made. Among children and the youth the disconnect is still more, which is why we made the effort to get him here,” he says, pointing to his son.

Wednesday marks the 150th birth anniversary of Gandhi, who Indians often refer to as “the father of the nation”.

India’s independence from British colonialism in 1947 came largely through Gandhi’s adherence to non-violent “satyagraha”, meaning “the fight for truth”. It was resistance through civil disobedience and “ahimsa” (non-violence in Hindi). 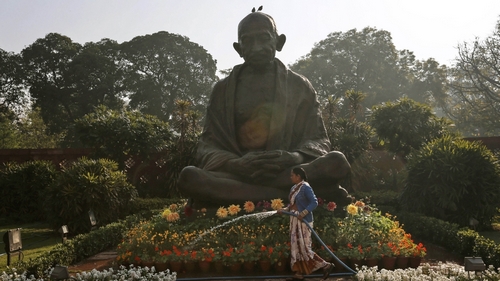 Statue of Mahatma Gandhi inside the premises of India’s parliament File: Saurabh Das/AP

Gandhi’s ideology has been questioned in India, with a growing number of politicians repudiating it as lofty or impractical. But, outside of politics, he remains an inspiration.

Social campaigners such as Ela Bhatt and Rani Bang, credited for women’s empowerment and revolutionising healthcare, are fairly well-known in India, but hundreds of Gandhi-inspired individuals and groups work quietly, away from public glare.

It is Modi versus Gandhi now. One has to take a position, whatever the cost.

Hundreds of kilometres away in central India, Medha Patkar has dedicated her life to protesting the Sardar Sarovar Dam, one of the world’s largest and most controversial hydropower infrastructure projects on the Narmada river.

Active for nearly 35 years, Patkar’s Save the Narmada Movement is considered the longest Gandhian movement in contemporary times.

It scored landmark victories, such as securing the compensation and rehabilitation of indigenous people displaced by the project.

“One has to resort to satyagraha when the state does not display any sensitivity towards people’s suffering. Through these protests, we ultimately aim to appeal to the conscience of the society so that the government is forced to respond,” says Patkar.

Patkar is credited for the rise of civil society movements in India, as she brought together almost 200 groups by founding the National Alliance of People’s Movements.

In recent years, Gandhian struggles have shaken India. Be it “Iron Lady” Irom Chanu Sharmila’s spirited resistance against a draconian security law or Anna Hazare’s 2011 anti-corruption campaign that led to the removal of the Manmohan Singh government, the Gandhian tactic of prolonged hunger strike is still deployed.

Chile police continue to use pellet rounds despite suspension

Social scientists and campaigners alike stress the significance of Gandhian values as the answer to global tension and conflict.

Yet, these face a troubled future in India, with the emergence of Hindu nationalism, growing hate crimes and polarisation of Hindus and Muslims.

At the heart of Gandhi Smriti is Martyr’s Column, which marks the spot on which he was shot dead by a Hindu zealot, Nathuram Godse. 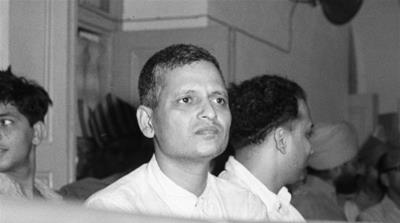 Godse, who held Gandhi responsible for weakening the country by allowing the partition of India and Pakistan, was allegedly linked with the Rashtriya Swayamsevak Sangh (RSS), a far-right Hindu organisation that is the ideological mentor of the ruling Bharatiya Janata Party (BJP).

Hindu hardliners and BJP leaders have made public statements to build a narrative that blames Gandhi for the country’s division and other ills.

“The official regime has put Gandhi in mothballs. This year has been the year of violence,” sociologist Shiv Visvanathan says, referring to violence and strife in India, including the ongoing clampdown in Indian-administered Kashmir.

Gandhi is trivialised and not remembered.

Gandhi’s name and image are used for official slogans and programmes – like the Clean India campaign – but his ideas are not, Visvanathan says. “Gandhi is trivialised and not remembered.”

Environmental movements against nuclear or dam projects and peaceful resistance by Kashmiri separatists are dubbed “anti-national” and banned by leaders, Visvanathan says.

Patkar says the Indians today, more than ever, need Gandhi’s ideas to guide them. “It is Prime Minister Narendra Modi versus Gandhi now. One has to take a position, whatever the cost.”

The Mahatma matters in several ways, as his grandson and scholar Rajmohan Gandhi writes in the India Today magazine:

“In our world’s post-truth phase where a Donald Trump grabs the headlines, threatened minorities receive the rough end of the stick and threats to the planet are ignored, a Gandhi who has been dead for 70-plus years frequently pops up as a reassuring symbol, the pro-truth defender of the rights of minorities and of our planet.”