Argentina flew out of the 2018 world Cup in the 1/8 finals and now can fully focus on the economic problems that are much more serious than the departure of the team from the world Cup.

Despite endless conversations about financial aid from the International monetary Fund and the reforms that this money will allow, the national currency of Argentina continues its steep decline. Peso once again renewed its historical minimum, despite all the attempts by the Central Bank to stop the collapse. 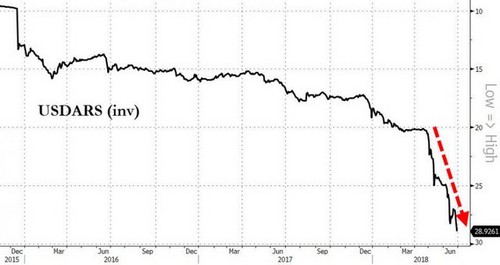 At the end of last week, the financial regulator has decided to intervene and bought pesos, about $1 billion, however, this is only partly influenced by the movement of the currency, and at the end of the day it is still cheaper by about 3%.

Below we present a graph where marked by important events, which, however, could not change the trajectory of devaluation on the foreign exchange market. Also note that the June intervention, billions were also unsuccessful. 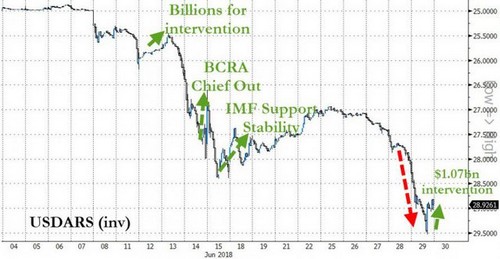 We noted the departure of the team of Argentina from the world Cup. The biggest football tournament on time, she forced to forget about problems and concentrate on the team (the Argentines cheer for the team with all my heart). Now, however, the economic downturn was compounded by the emotional decline after the failure of the players.

The IMF expects economic contraction of in III and IV quarters of this year, however, I believe that the reforms and the behavior of private investors will allow it to grow by 1.5% in the first quarter of 2019.

The IMF agreed to give Argentina a loan of $50 billion

The IMF and Argentina signed an agreement to provide assistance, which should help stop the decline of the peso and financial support to the government of President Mauricio Macri. It, in turn, promised to accelerate the implementation of plans to reduce the budget deficit. The Fund will open Argentina’s credit line by $50 billion, this amount corresponds to the maximum estimates, which gave analysts talk about $30-50 billion, “Vedomosti”.

Macri turned to the IMF about a month ago. The fall of the peso exchange rate is from the beginning of the year fell by more than 25%, began to threaten the ability of Argentina to service the debt, most of which are denominated in dollars. Argentina only a few years ago returned to the international capital market, once settled disputes with investment funds, seeking payment after the massive default in 2001.

Argentina has high inflation, budget deficit and current account, and this combination of factors always detrimental to national currencies.

Who will take away the subsidies and pensions

In the USA, there have been protests against the immigration policy of trump

The fire in Solingen