June 1, the President of the United States Donald trump wrote on Twitter barely veiled message about the upcoming positive statistics on unemployment, breaking, thus, the presidential rules (and maybe law).

Looking forward to seeing the employment numbers at 8:30 this morning.

A hint of the White house that the may employment figures will be excellent, led to the growth of the market. However, this fact, according to Jeffrey Snider of Alhambra Partners, it is alarming not only in connection with the personal trump disregard to existing rules.

According to the latest statistics, the unemployment rate in the US fell to 3.8%. But this, “at first glance, excellent figure hides deeply hurt the labor market,” he wrote in his blog, Snyder. The fact that more Americans of working age refuse to find work.

Society usually sees low unemployment as a positive sign, as it believes that in this case everyone who wants a job, it is. But the broader statistics on employment indicates that it is not.

“As a rule, in the absence of real growth in the labour market, politicians have to focus on the unemployment rate,” notes Snyder.

The trump recently pointed to this problem. Criticism of official statistics on employment was one of his main themes during the election campaign. 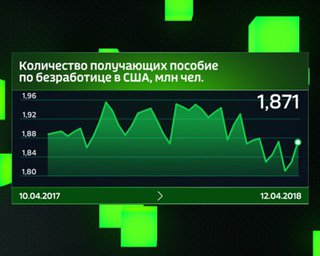 The number receiving unemployment benefits in the United States

And here is what he said in may, 2016: “You have heard about unemployment in the 5%? This is an absolute lie. This figure is invented for presidents and politicians to look good to voters.” A month after winning the presidential election, he still held critical positions: “Statistics on unemployment, as you know, completely false.”

Remembering that, Snyder suggests that trump is well aware of the recent official data on unemployment. In order to understand the problem, you need to explain how the U.S. government evaluates the health of the labor market. Officially labour resources consist of two categories of people: those who have work, as well as the unemployed or those who are willing to work and actively seeking work during the last four weeks.

The unemployment rate is the ratio of the total number of unemployed to the economically active population does not tell us anything about the people who stopped looking for work a month ago or more. This group is actually thrown out of the workforce.

Therefore, when the unemployment rate is decreasing, this happens for one of two reasons (or a combination of the two reasons). More people found work. Or more people abandon job search.

When politicians, experts and the media welcomed the low, steadily decreasing unemployment rate, they suggest that this is the first reason – the former unemployed found work – has led to increased employment.

But Snyder rightly States that if employers do massively employed, we would have seen a sharp rise in employed or actively seeking employment people compared to the number of citizens who left the labour market.

“If the job market was really strong, it would be a clear number of those who joins the workforce, he said. – Millions of Americans not included in official statistics, would return to the labour market if they were offered a decent job.”

This is what is happening today. Despite rumors of a shortage of labor, which distribute media, the proportion of working-age Americans who have a job or are trying to find, continues to decline. The level of economic activity – the proportion of the population aged 16 years and older that is working or looking for work – continued to fall in may.

Now only 62.7 percent of Americans in this group have jobs or are actively trying to find her. This is roughly the same as in the late 1970s, before women came EN masse into the labour market. And this is not only because the labor force of America is aging. 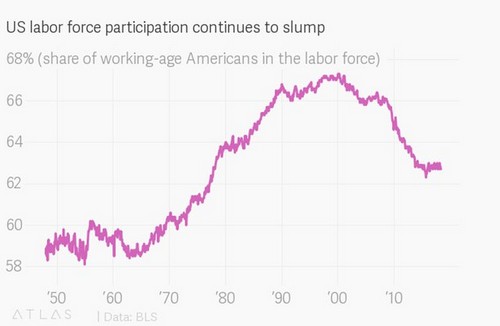 Participation in the labour force

Despite the fact that this is the longest economic growth in US history, the smaller the share of employees aged 20 to 54 years today than when the last recession in December 2007, Another sign of the weakness of the labor market is wages.

If hard to find employee, as indicated by low unemployment, employers, in theory, have to pay a higher salary to attract potential candidates. This is what happened in the past. But with the end of 2016, wage growth slows, says the chief economist of the Center for economic and policy research Dean Baker. 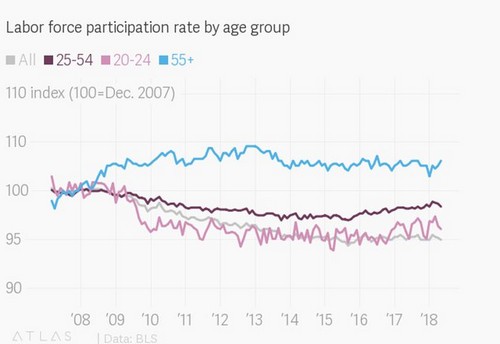 The participation of different groups in the workforce

It is not always clear why adult Americans leave the labor market, but this trend points to a worsening social and economic situation. Even more troubling is that those who have power and influence continue to deny the problem, enjoying only the official unemployment rate of 3.8%.

Trump was one of the few exceptions, so despite its many shortcomings, some have seen in his presidency is the hope for the middle class of America. But it remained a hope.

As Snyder concludes, “one guy who was willing to speak honestly about the true situation on the American labour market seems to have become the same as all other politicians”.

Trump wants to withdraw US from the WTO